Eaaflyway > News > Plan to Save the Far Eastern Curlew

Plan to Save the Far Eastern Curlew 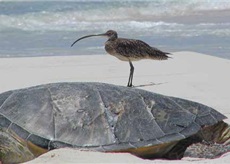 UNDER THREAT: A Far Eastern Curlew rests alongside a sleeping turtle during a stopover in the outer Hawaiian Islands. /Photo from Wikimedia

When a Far Eastern Curlew visited Pukorokoro last summer it was a rare event because it’s numbers are declining rapidly. Pukorokoro Miranda Naturalists’ Trust (PMNT) ’s international representative David Lawrie reports on a plan to save the world’s largest shorebird.

Sightings of the Far Eastern Curlew at Pukorokoro Miranda are now very unusual. In the past there were often a number of curlew on the outer shell banks roosting with the other migratory waders.

This curlew (Numenius madagascariensis) is endemic to the East Asian-Australasian Flyway and its large size and heavy down-curved bill make it unmistakable.

It breeds through Mongolia, Northeast China, and Siberia eastwards to Kamchatka. On migration the birds travel through Malaysia, Thailand, Vietnam, China, the Korean Peninsula and Japan to their breeding grounds. Approximately 25% of the population winters in the Philippines, Indonesia and Papua New Guinea, and around 73% spend the nonbreeding season in Australia.

However, evidence from Australia suggests that its numbers have declined by an estimated 81.4% over 30 years and the species is now listed as vulnerable under the IUCN Red List. This decline has been mirrored in New Zealand although the species was never common in this country.

The greatest threat to the survival of the Far Eastern Curlew is the ongoing destruction of tidal mudflats that it utilises on migration in China and the Republic of Korea. In addition it is affected by hunting and trapping in Russia, China and South East Asia as well as human disturbance, pollution, coastal development and the effects of climate change on habitat.

As a result of the rapid decline the Australian Government representative to the last meeting of the EAAFP asked for a single species action plan for the conservation of the curlew be prepared with some urgency. Because of the importance of Australia to this species the Australian Government offered to prepare the plan and circulate it to other country delegates for comments and approval.

The draft of this plan is now available and clearly sets out the courses of action that need to be taken throughout the whole flyway to reduce the threats to this species. The main threat is the loss of habitat around the Yellow Sea which is a key stopover site on both northward and southward migration.

Any actions taken to improve habitat for the curlew will also protect habitat of godwit and Red Knot. PMNT is supporting the Australian Government’s action plan and in future years we hope to see this majestic shorebird once again gracing our roosts at Pukorokoro.