The Malaysian Nature Society (MNS), with the support of Majlis Daerah Kuala Selangor and See Hoy Chan Sdn Bhd as its main partner, celebrated the arrival of migratory birds and its amazing fireflies at Kuala Selangor at its annual Pesta Sayap 2016 (Festival of Wings) event at the Kuala Selangor Nature Park today (KSNP).  More than 1000 people including students and local communities participated in the activities.

At this year’s event, the celebration featured a whole range of environmentally related activities inclusive of an art exhibition that was conducted with the theme ‘Culture love Nature’ as part of the fund raising activity for KSNP. This initiative is pioneered by Puan Hajjah Noraini Binti Roslan, YDP Majlis Daerah Kuala Selangor to instil a nature-loving mindset among fellow locals. There were 17 local artists contributed their efforts to draw 40 paintings which will be fundraised to support MNS conservation works. An array of exhibition booths along with on-going nature talks and performances were also open for public and school students. In line with that, a number of environmental activities were conducted by MNS members and local communities for the visitors. The activities include nature walk, bird watching, and mangrove seedling planting at KSNP mangrove nursery and other many other interesting green activities ranging from arts and craft to green music. The aim of this year’s event is to create awareness among local people about the importance of wetland habitat and migratory birds and also an opportunity to launch MNS’s latest publication – KSNP towards RAMSAR. 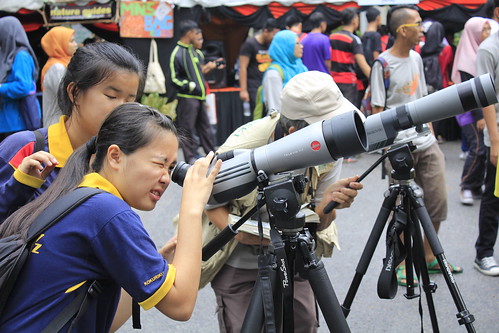 Birdwatching in the Park © H.Y. Leong

Among the dignitaries present was Ms Nicole Fe Lynne, Ms Earth Eco Beauty Selangor 2016. “An exciting, beautiful and knowledgeable event not to be missed by all walks of ages ranging from kids to the elderly and families as it will definitely manifest the love for mother nature and animals. I definitely encourage every individual to visit nature parks like Kuala Selangor Nature Park not only once but continuously motivated to spend time and learn to nurture our appreciation through our actions and voices towards the ecosystem and biodiversity that we have been blessed with and as we all know our climate is getting hotter which will damage lives of flora, fauna and humans in the long run. We must know that it is not only global warming, it is a global warning. Let’s be healers of the planet, not destroyers,” she stated.

The events main partner, See Hoy Chan Sdn Bhd also unveiled its latest shopping mall logo, “The Starling Mall”. “The Starling mall supports MNS’ efforts because MNS’ conservation work of enabling humans to connect back to nature is something we are creating at the Starling. Our strategy is to use our parks to create a haven providing shoppers a sense of ease, comfort and well-being,” said Mr. Joe Tan, Chief Executive Officer of See Hoy Chan Sdn. Berhad.

“The MNS Pesta Sayap 2016 once again welcomes the migratory birds to our shores, in particular the waders or shore birds. These long distance flyers migrate annually from the harsh winter of their homelands in the northern hemisphere to the warmer south where food source could be found in abundance,” stated MNS President, Henry Goh. Malaysia with its long coastline represents an important part of the East Asian Australasian Flyway (EAAF). The Central Selangor Coast IBA (NCSC IBA) consists of coastal wetlands, mudflats, peat swamps, mangrove, rivers and rice fields – all suitable habitats for the waders. This also makes the (NCSC) and important part of the EAAF. The annual FOW (Festival of Wings) plays a role of educating and creating awareness amongst the public and school children on the role the mangroves play as the first line of defence in the case of a tidal wave or a tsunami. KSNP born in 1987 is located centrally along the NCSC IBA is maturing into an international status wetlands managed by MNS and is ready to be nominated as a Ramsar Site,” added Henry Goh.

Pesta Sayap 2016 was launched by YDP Majlis Daerah Kuala Selangor, Puan Hajjah Noraini Binti Roslan, This year’s celebration is unique as it blends culture-love-nature concept as well as local communities engagement to propel further for conservation efforts. She added her support and commitment to work towards better awareness, more conservation activities and plans for Kuala Selangor Nature Park as this could expose the park as an eco-tourism destination as well as booming local economy through tourism industry. 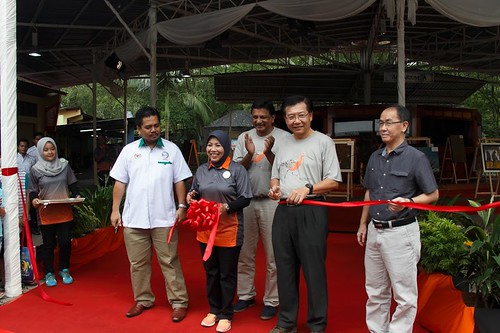 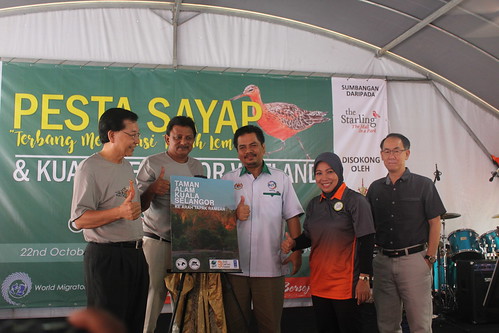 About the Malaysian Nature Society (MNS)
The Malaysian Nature Society (MNS) is Malaysia’s oldest non-government environmental organisation. It was founded by a group of British expatriates deeply interested in our country’s natural heritage in 1940 when the Malayan Nature Journal Volume 1 was published. Today, MNS is the largest membership-based organisation in Malaysia with over 4000 local members and 13 branches spread across the country. Evolving from a core group of society volunteers, MNS’ Kuala Lumpur-based headquarters has now a team of 30 dedicated full time staff who see to the day-to-day running of the society’s administration and activities. Volunteers and volunteerism is the core strength of MNS. For more information, visit www.mns.my

About Kuala Selangor Nature Park (KSNP)
Now the Kuala Selangor Nature Park or KSNP thrives as a tourist destination and educational resource, instilling interest and understanding for the area’s unique habitats. It has since become a sanctuary to many species of flora and fauna such as the endangered Silvered Leaf Monkey (Presbytis cristata) which KSNP has adopted as its logo.
The uniqueness of the park is evident as it is also very accessible. There are trails of varying distances and visitors get to explore and experience different habitats as there are bird hides and watch towers situated around the manmade 25 acre brackish water lake system. Many local and migratory bird species are found in the park.Visitors also get to enjoy the Mangrove walkway which takes you into the heart of the mangrove forest where you will get up close and personal with the flora and fauna that are unique to this habitat. Situated only 20km away from the heart of KL’s city centre, the KSNP is an ideal place to escape to where a greater appreciation for the environment among the public can be encouraged.