Eaaflyway > News > One quarter of the world population of the Critically Endangered Spoon-billed Sandpipers on Rudong mudflats, Jiangsu, China

One quarter of the world population of the Critically Endangered Spoon-billed Sandpipers on Rudong mudflats, Jiangsu, China 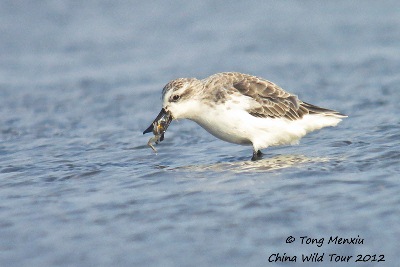 A record total of 106 Spoon-billed Sandpiper was counted over a 120 km stretch of mudflats in the wider Rudong area, Jiangsu (near Shanghai) China, between 12-15 October. This number amounts to one quarter of the estimated world population of this critically endangered bird species and is the highest number observed since conservation activities started in 2000.

Rudonghas been known for some time to be a critically important staging area (where birds stay to rest and feed before continuing their journey) for the migration of this critically endangered species. An international team of experts conducted the survey to evaluate the importance of the site to the Spoon-billed Sandpiper and other species.

As several large flocks of waders in the area were not found at high tide roosts, the expert team estimated that the total number of Spoon-billed Sandpipers staging in the area could be as high as 1/2 of the total estimated global population of 350-400 birds.

During the survey period, at least one bird was observed with a lime green flag and originated from the Meinopylgino breeding site in Chukotka, Russia, where the bird had been ringed as a chick.

The meeting highlighted the Rudong mudflats as a staging area of critical importance for the Spoon-billed Sandpiper and other species. The participants were concerned that mudflat reclamation and unsustainable industrial projects continued unabated in the area, threatening the remaining sites. Crucial staging habitats could disappear completely soon, severely impacting half the world population of the Spoon-billed Sandpiper. The meeting discussed the conservation actions that could be taken to address the threats to Rudong, including designation of new protected areas and the sustainable management of the intertidal areas. There is an urgent need to further develop these plans and prepare a suitable management strategy to conserve these highly important mudflats. It was also recommended to include the Spoon-billed Sandpiper in the Chinese Red Data Book.

The international survey team was led by Zhang Lin and Tong Menxiu of the “Spoon-billed Sandpiper in China” Team. Other members were Nigel Clark from the British Trust for Ornithology (BTO) in UK, Karin Eberhardt from Myanmar and ChristophZöckler of ArcCona Consulting, the Coordinator of the East Asian-Australasian Flyway Partnership (EAAFP)Spoon-billed Sandpiper Task Force. Theysurveyed the mudflats between Jianggang, Dongtai in the North and Dongling at the southern end of the wider Rudong area in Jiangsu Province, to establish an estimate of the population of staging Spoon-billed Sandpiper between 12-15 October.

Dr.ChristophZöckler summarised his impressions: ‘I am very impressed by the enthusiasm, dedication and skills of the local wader experts in Rudong. It was fascinating to see how Zhang Lin and Tong Menxiu in particular allocated the roosting flocks and skilfully managed to distinguish Spoon-billed Sandpiper from the many thousands of Dunlins, Red-necked Stints and Broad-billed Sandpiper that roosted densely packed with them.’

He further emphasised: ‘The Rudong mudflats are possibly the most important site for this critically endangered species on the entire flyway, as well as for other species, such as the globally endangered Nordmann’s Greenshank, of which we counted over 280 birds! However, the site is also among the most threatened areas in the Flyway’

‘All our efforts to safeguard the breeding area in Russia and most important wintering sites in Myanmar and Bangladesh will be in vain if we are unable to protect the Rudong mudflats.’ continued Dr.Zöckler.

Dr. Nigel Clark from the BTO in the UK added: ‘These mudflats are an important feeding area, allowing tens of thousands of migratory waders, arriving from Arctic and boreal breeding grounds to refuel their fat reserves for their onward journey to the wintering grounds in South East Asia and Australia. Almost all Spoon-billed Sandpipers we observed were adult birds, which complete their wing moult in the area, staging an estimated two months on average.’

Jing Li from the SBS in China team summarised her impressions: ‘It is good to see so much international support, so we can continue our survey work and highlight the significance of the Rudong mudflats for the Spoon-billed Sandpiper and also other rare species, such as Nordmann’s Greenshank. But we also realise that we have to come up with a solution within China to tackle the unsustainable loss of crucial wader habitats.’

Vivian Fu from HKBWS noted: ‘It is encouraging to see the enthusiasm generated about the Rudong mudflats and I think we covered a lot for the protection of Rudong at this meeting.’

River Fu from WWF China Programme Office said: ‘Coastal mudflats in China, such as the Rudong mudflat, are facing severe threats from rapid economic development. We must not let China to be the weakest link in the flyway. Chinese organizations are trying their best to put forward more conservation efforts while the international support will be very helpful. I find more hope and strength from the people participating this meeting – let’s keep working!’

The survey and workshop were organised and coordinated by ArcCona Consulting, Hong Kong Bird Watching Society and Wild Bird Society of Shanghai and was only possible through generous financial support from the US Fish and Wildlife Service, Audubon California and the East Asian Australasian Flyway Partnership (EAAFP).
Contact: ChristophZockler, ArcCona at cz@arccona.com Jing Li Spoon-billed Sandpiper in China at sylvie.jing@gmail.com