It was the kind of news experts only believe if they see it with their own eyes: A man in China claimed he had spotted 100 Spoon-billed Sandpipers foraging on the muddy coast of the Yellow Sea.

The bird is so small that it would barely cover the hand of a grown woman. It is also so rare that a group of such a size would constitute a fifth of the worldwide population.

“Count them,” wrote Tong Menxiu, the man who found them. “Just in one photo there are dozens of them.” Tong is a birdwatcher from the eastern Chinese province of Fujian.

Every year around May, the tiny sandpiper migrates more than 8,000 kilometers south, from Arctic northeastern Russia through Japan, the Korean peninsula, and China, before arriving at its wintering grounds in Myanmar, Thailand, and Bangladesh. In the spring, it returns to Kamchatka and other coastal areas in Siberia.

Without the nourishing mudflats of coastal China along the way, especially around the eastern province of Jiangsu, the spoon-billed sandpiper wouldn’t be able to make such an arduous journey.

The chances that the bird will still exist in five years are already slim. If China isn’t on board in protecting it, sustaining the population becomes near impossible.

The chief problem is that China’s coastal wetlands are being destroyed on a large scale.

A year after Tong’s discovery, in 2012, Christoph Zockler, a German researcher and expert with the Spoon-Billed Sandpiper Task Force, travelled to Jiangsu province, along with several other experts.

“We couldn’t believe him,” Zockler said, referring to Tong and his claims. “So we went and saw for ourselves that it was a huge number.”

The conservationists were thrilled. The bird, with its distinctive spatula-shaped bill, is one of the most endangered species in the world. In the 1970s, there were around 2,000 to 2,800 of them, but habitat loss and poaching have decimated the population.

Today, the population is declining by 26 percent each year. That’s a thousand times faster than would occur naturally, the Wildfowl and Wetland Trust said. 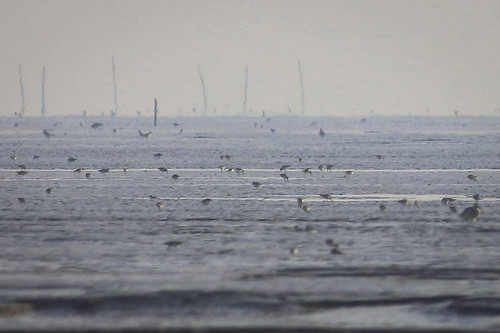 The conservation group believes that fewer than 100 adult pairs now remain in the wild. Zockler says the number could be higher, at between 400 to 600 individual birds. Either way, experts across the board agree that the Spoon-billed Sandpiper is on the verge of extinction.

In Jiangsu province, there are fewer and fewer places for the sandpiper to rest, forage, and molt. Land reclamation and rapid development of the shoreline have changed the ecology of the province. Once a vast, healthy ecosystem, the coast is now characterized by large-scale fish farms, busy harbors, and smog-belching factories. 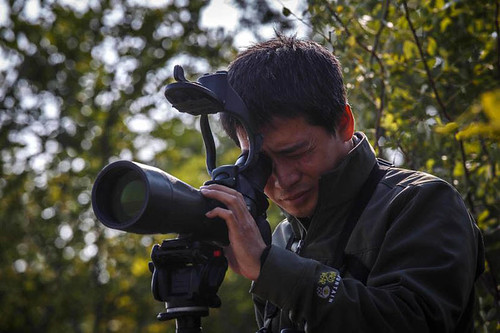 Tong believes that he can help save the sandpiper. In spring and fall, when the birds fly through Jiangsu province, he spends most of his time at the shore watching them.

In an effort to raise awareness and keep track of the population, Tong takes bird-watching groups and international researchers to Dongtai and Rudong, two adjacent counties, also in Jiangsu province, with a combined coastline of 200 kilometers. Located in the Yangtze Delta, the wetlands here are rich in plants, worms, and small shrimp due to the nourishing silt flushed down from the river. 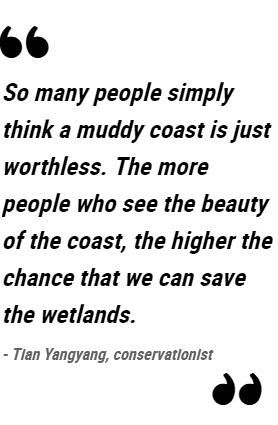 Just a few years ago, Tong counted scores of sandpipers in Rudong. Last fall, the number was down to 10. Perhaps they are resting elsewhere, like in Dongtai, where numbers have slightly increased, or perhaps, he said, they’ve died. Migratory routes that are thousands of years old don’t change easily.

In other countries along the sandpiper’s long migratory route, threats are being addressed. In Myanmar, for example, local organizations have set up ecotourism projects that are successfully changing attitudes. Once killed for their meat, “people have started to see that the birds are more valuable alive than dead,” Zockler said.

But the situation in China, he said, is frustrating. “We don’t have all the partners along the migratory route, including China, working in the same direction.”

So far, conferences, open letters, and other awareness-raising campaigns have produced only limited results.

Rapid urbanization and industrialization continue, and little room is left for wetlands and wildlife.

Today, for example, it takes 20 minutes to drive from the temple to the edges of the Dragon King’s marine realm. Vast stretches of land have been reclaimed, and the shoreline that elderly villagers remember has been pushed several kilometers east. Fishermen now venture farther and farther in search of crabs and other small seafood on the coast, and yet the catch is meager.

More than half of coastal wetlands have already been lost due to the economic boom, according to an October 2015 report by U.S.-based think tank Paulson Institute. Among all types of ecosystems, coastal wetlands are the most threatened, yet they are also the least protected, the institute found. 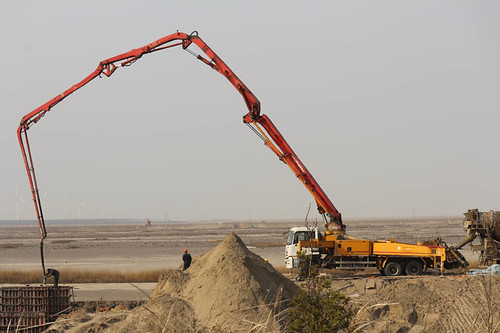 In Jiangsu province, authorities plan to reclaim about 1,800 square kilometers of land between 2010 and 2020.

The development will come at a high cost not only for the Spoon-billed Sandpiper, but also for millions of other migratory waterbirds, as three out of the world’s nine major flyways for waterbirds pass through China.

To get a better picture of the impact, the International Union for Conservation of Nature (IUCN) studied coastal habitats in East and Southeast Asia. Annually, waterbird species that depend on the Yellow Sea wetlands decline by 5 to 9 percent on average — “among the highest of any ecological system on the planet” in 2014, according to the IUCN.

For the Spoon-billed Sandpiper, the figure stands much higher, at 26 percent.

China’s State Council pledged to maintain at least 53 million hectares of wetlands last year. But, given the current development and conflicting plans from local governments, the Paulson Institute’s report questions whether the figure is realistic.

Some researchers say there’s no point setting such a goal if all that remains is rocky wetlands, where birds still cannot find a place to roost. What’s needed is the will to preserve muddy coastal areas where migratory birds can find nourishment. Roughly one third of China’s coastal region is rocky, according to an estimate from one expert.

Like Tong, Tian Yangyang is at the forefront of the fight for the sandpiper’s survival. Ahead of this September’s INTECOL International Wetlands Conference in Changshu, Jiangsu province, Tian has circulated an open letter to authorities online, calling for a properly protected area for waterbirds.

“Saving the Spoon-billed Sandpiper can also save thousands of shorebirds that share its habitat,” Tian, who works as a program officer for the Chinese environmental organization Let Migratory Birds Fly, wrote in one of the letters.

He also takes groups on guided tours through the coastal wetlands of Jiangsu province.

“Somebody told me that the coast in Dongtai is just a piece of muddy land,” a teenager wrote in an online diary after a trip with Tian. “Don’t be disappointed, they warned. But I had a lot of fun. There were many birds, shells, fishermen, and their little kids.”

Tian believes that making people understand just how important wetlands are is the only way to save them — and, by proxy, the birds like the Spoon-billed Sandpiper that depend on the wetlands for survival.

“So many people simply think a muddy coast is just worthless,” he said. “The more people who see the beauty of the coast, the greater the chance that we can save the wetlands.”