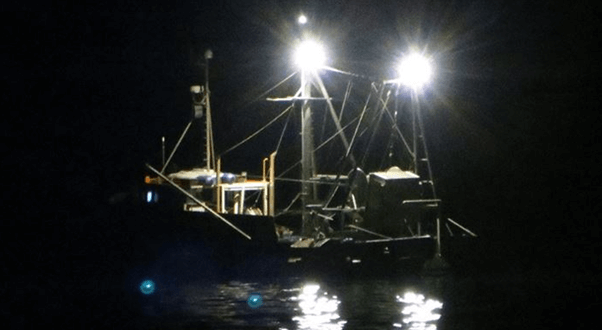 New research has expanded our understanding of which migratory bird species are most threatened by light pollution at sea.

Tomorrow, 8 October, is World Migratory Bird Day, an international awareness day as birds embark on their seasonal migration. These epic journeys happen twice a year, one for each migratory season.

Tītī/sooty shearwaters, toanui/flesh-footed shearwaters and many other seabirds return to the New Zealand shores in spring from their winter grounds in the distant seas of Japan, Alaska, California, and South America.

On these journeys they face many threats, including fisheries bycatch, plastic pollution and changing prey distributions due to warming ocean temperatures.

One threat that is not yet well-understood is light pollution at sea. Vessels such as fishing boats, container ships and cruise ships may all have bright outside lighting that attracts and disorients birds, leading to vessel strikes (collisions with ships) and subsequent drownings.

“The vastness of the open ocean means that it’s very difficult to understand this threat at sea,” says Johannes Fischer, DOC Technical Advisor. “Most of our knowledge comes from terrestrial studies.”

To understand the impact of light pollution at sea better, researchers at DOC recently attached light-sensitive tracking tags to 179 seabirds across seven different species. These tags record light exposure events and exactly where they occur.

Graeme Taylor, Principal Science Advisor at DOC, has been putting light-sensitive tags on seabirds since 2005, but this new research has vastly expanded the understanding of which species are most threatened by light pollution at sea.

“We were seeing these light ‘events’ during the dead of night,” says Graeme. “At first, we thought they might be lighthouses, but this new research shows these events happening out over the deep ocean where there isn’t any land.

“We’ve concluded the light must be coming from ships.”

The good news is that some of the most endangered seabirds in the country, such as the Chatham Island tāiko, kuaka/Whenua Hou diving petrel and ranguru/Chatham petrel, seem to encounter relatively little light pollution out at sea.

However, more than a third of tītī Wainui/fairy prions, toanui/flesh-footed shearwaters and tītī/sooty shearwaters encountered light pollution throughout the Pacific, particularly between Japan and Hawaii, Alaska and southeast of Aotearoa.

“We can work with vessel owners to reduce this risk,” says Johannes Fischer. “Minimizing light use around seabird colonies, shielding lights and changing bulbs are some of many actions that can reduce vessel strikes.”

Minimizing light pollution doesn’t just benefit birds. It has impacts on nearly all ecosystem levels from other large migratory species like the fish and squid that seabirds snack on, to the plankton that migrate to the sea surface at night.

“Our seabirds connect the oceans and connect Aotearoa to the rest of the world. It’s our job to protect them on their spectacular migrations.”

All tracking results have been made open access by DOC through an online tool: Seabird Night Time Light Exposure tool (external site).

Aotearoa is the world’s seabird capital and New Zealand seabirds complete some of the most spectacular migrations on the planet, entirely out at sea.

Light pollution is a global threat and light polluted areas are increasing by 2% per year.

Start with natural darkness and only add light for specific purposes.

Light only the object or area intended – keep lights close to the ground, directed and shielded to avoid light spill.

Use the lowest light intensity appropriate.

Use lights with reduced or filtered blue and violet wavelengths.

How to mitigate marine light pollution

Original article by Department of Conservation of New Zealand, with permission to re-publish the context: https://www.doc.govt.nz/news/media-releases/2022-media-releases/birds-used-to-track-light-pollution-at-sea/