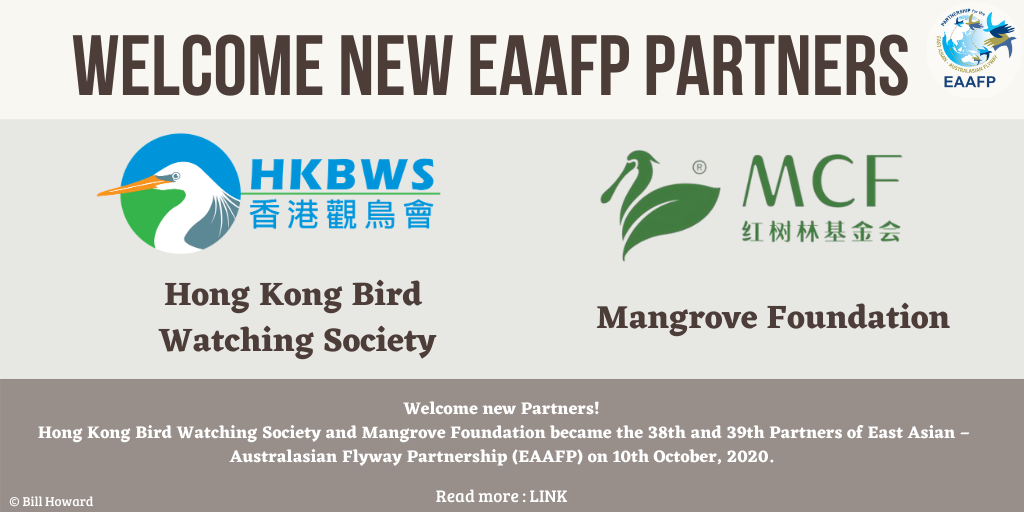 In line with the World Migratory Bird Day, we are very pleased to announce that the Hong Kong Bird Watching Society became the 38th and Mangrove Foundation the 39th Partners of the East Asian – Australasian Flyway Partnership (EAAFP) on 10th October, 2020.

The Hong Kong Bird Watching Society (HKBWS), based in the Hong Kong Special Administrative Region of the People’s Republic of China, was established in 1957. It is a membership-based, non-governmental organization aiming at appreciating and conserving birds and the natural environment. Since 2013, HKBWS became a partner of BirdLife International (also a Partner of EAAFP). HKBWS is already known to many of EAAFP Partners, as HKBWS has been involved in regional conservation of bird species, particularly on Black-faced Spoonbill, in which they are leading on the annual international Black-faced Spoonbill Winter Census since 2003 (check here for all the reports). Their staff contributes as coordinator of the EAAFP Black-faced Spoonbill Working Group and Seabird Working Group respectively. HKBWS has a long history of bird research, environmental education and conservation in the region. Their nature conservation management projects in two wetlands in Hong Kong are regarded as best practices. In addition, HKBWS established a China Programme together with BirdLife international in 2005 to promote the development of bird watching societies and implement conservation projects of threatened species, such as Chinese Crested Tern, Spoon-billed Sandpiper, Scaly-sided Merganser in mainland China as well as coordinate China Coastal Waterbird Census. In recent years, HKBWS also expanded their area for research and conservation projects into Indonesia and Democratic People’s Republic of Korea.

The Mangrove Foundation (MCF) is a Chinese public foundation dedicated to protecting worldwide wetlands and associated biodiversity through science-based conservation, wetland education, extensive collaboration, and social resources mobilization. Since the foundation was established in 2012, the MCF has been exploring a social participation model for wetland conservation, based on Shenzhen Bay, one of the important sites for migratory waterbirds in the East Asian-Australasian Flyway (EAAF). MCF is actively contributing to conservation in the EAAF and conducted a series of projects for coastal wetland conservation, especially in contributing to the Blueprint of Coastal Wetland Conservation and Management in China and China Coastal Wetland Conservation Network. MCF has developed a global strategy for mangrove conservation since 2018, covering ASEAN member states, where sites are important for migratory waterbirds. In addition, during EAAFP MOP10 in 2018, MCF officially launched the strategic partnership with Center for East Asia-Australasian Flyway Studies (CEAAF) based in Beijing Forestry University (BFU) for supporting the Science Unit (SU) of EAAFP as well as initiating a conservation programme for Spoon-billed Sandpiper (SBS), which protects SBS as flagship species for migratory shorebirds and their habitats in the EAAF. A “Spoon-Billed Sandpiper Conservation Alliance in China” was then established and MCF aims at expanding it to the EAAF, to further promote a flyway scale conservation activities engaging with Russia, Myanmar and EAAFP SBS Task Force through monitoring, research, outreach, policy consultation and citizen science.