National mechanism for communication among Network sites launched in China 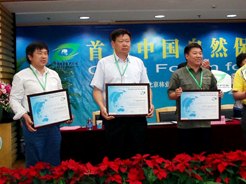 Representatives with the Certificates at China Forum for Nature © Simba Chan

On 22-23 May 2011, a special China Forum for Nature was conducted at Beijing Forestry University in connection with World Biodiversity Day. The Forum was co-organised by the University, the China Wildlife Conservation Association and Future Generations China and was hosted by the University’s School of Nature Conservation. Speeches were made by Ms Yin Hong, bureau chief of the State Forestry Administration (SFA) which is the EAAFP focal point for China, and invited guests including the Chief Executive of the EAAFP Secretariat. Certificates of Participation were presented to representatives of China’s 19 Flyway Network sites. The occasion marked the launch of an arrangement whereby the School of Nature Conservation, under Professor Lei Guangchun, will support communication among China’s widespread Network sites and provide technical advice to SFA and the sites on waterbird conservation issues generally. With national partnerships or similar domestic-level networks for communication now developing in Japan, South Korea and China, the Partnership is making steady progress in North-east Asia on this important desired outcome of EAAFP.