Eaaflyway > News > More Good News For Yellow Sea Conservation And How You Can Help!

More Good News For Yellow Sea Conservation And How You Can Help!

Protecting the Yellow Sea is the highest conservation priority in East Asia.  Coastal wetlands in China are facing massive pressure from economic development and, over the past 50 years, the country has lost more than 60 percent of its natural coastal wetlands.

As readers of this website will know from articles here, here and here, there has been a huge national and international effort to try to conserve what remains of the incredibly rich intertidal mudflats on which millions of shorebirds, including the charismatic Spoon-billed Sandpiper, depend.

Earlier this year, there was a big, and symbolic, step forward when the Chinese government announced that a total of fourteen sites had been added to the “tentative list” for UNESCO World Heritage Site nomination.  I reported at the time that, although the tentative nomination, in itself, does nothing to protect these sites on the ground, it signals intent from the Chinese government.  And, should these sites make it onto the formal World Heritage Site list, that listing comes with a hard commitment to protect and effectively manage them.

Just a few months later, in mid-June, came another step forward.  The Hebei Provincial Forestry Department, Hebei Luannan County Government, the Paulson Institute and the World Wide Fund for Nature (WWF) signed a five-year Memorandum of Understanding (MoU) with the aim of protecting one of the most important sites along the East Asian-Australasian Flyway – Nanpu coastal wetland, near Tangshan in Hebei Province.  Nanpu is a site Beijing-based birders know well.  The spectacular concentrations of shorebirds, not to mention the world-class visible migration of passerines, makes it one of the best birding sites within easy reach of the capital. 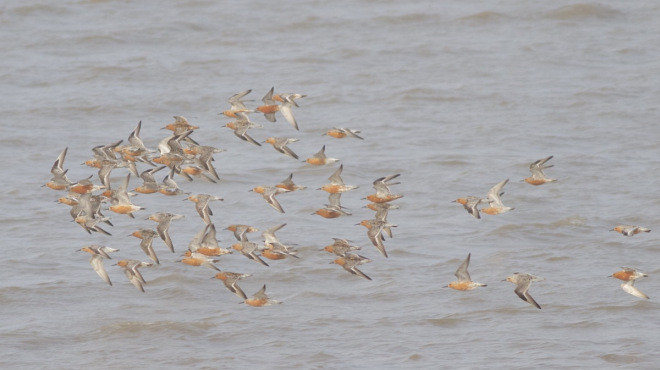 Red Knot is one of the species for which Nanpu is a vital stopover site. © Birding Beijing

Under the terms of the MoU, the four parties will work closely to conserve and manage the site, and will establish a provincial nature reserve (PNR) at Nanpu wetland within the 12 months.

Located in Luannan County of Hebei Province, Nanpu wetland consists of natural intertidal mudflats, aquaculture ponds, and salt pans. Its unique geographic location and wetland resources make Nanpu Wetland one of the most important stopover sites for migratory water birds along the East Asian-Australasian Flyway (EAAF), including rare and endangered species such as Red Knot, Great Knot, Curlew Sandpiper, Black-tailed Godwit, and Nordmann’s Greenshank.  Each year, as many as 350,000 water birds stage and refuel here.  Among the water birds at the Nanpu wetland, the population of 22 species exceeds one percent of their global population sizes or their population sizes along the EAAF, making it a wetland of international importance according to criteria determined by the Ramsar Convention, an intergovernmental treaty that provides the framework for the conservation of wetlands and their resources.

Nanpu wetland is facing many threats, such as reclamation, over-fishing and invasion of spartina, a rapidly spreading grass that suffocates intertidal ecosystems.  Studies show that there has been a steady decrease in population of some migratory water birds that depend highly on Nanpu wetland for refueling. For instance, over the past decade, the population of Red Knots that overwinter in New Zealand and Australia along the EAAF has been declining at an annual rate of nine percent. IUCN claims that if no further conservation measures are taken, few Red Knots might remain ten years from now.

According to the MoU, The Paulson Institute and WWF will provide best domestic and international nature reserve construction and management practices in the process of planning, approving, building, and managing Nanpu Wetland Nature Reserve, so as to build, protect and manage it in an effective and efficient manner.

Let’s hope this initiative is the first of many and that more Provincial and local governments along the Yellow Sea coast will follow this example and work to protect the remaining intertidal mudflats in their regions.  There is no doubt that the Yellow Sea is a jewel in the crown of China’s environmental and ecological heritage and it has the potential to attract thousands of visitors each year, as well as endearing a sense of pride for local people and, indeed, the whole country.

Finally, if you would like to experience the astonishing Yellow Sea migration for yourself, contribute to the conservation effort and you’re free this November, you’re in luck! One of the most hard-working and impressive domestic organisations working to protect the Yellow Sea intertidal mudflats – local NGO, Spoon-billed Sandpiper in China (SBS in China) – is running the second of its special birding tours to the Yellow Sea coast this autumn.  Showcasing the global importance of this coastline, the tour will focus on some of the most endangered and unique birds of the region, including Spoonie.  It will be led by some of China’s finest young conservationists and bird guides and 10 per cent of the participation fee will go directly to support local conservation NGOs in China.  Background about the first trip, this spring, can be found here.  And here’s a summary of the November trip:

The tour will be led by China Coastal Waterbird Census Team surveyors who have been working as volunteers for over 10 years.

For more details on this once-in-a-lifetime opportunity, there is a downloadable PDF and, for further questions, you can contact Li Jing, leader of SBS in China, on info@sbsinchina.com.

I wish I could join!