One of the challenges of designing a large meeting involving a diverse set of stakeholders with different backgrounds and interests, as well as expectations, is to come up with a format that effectively engages these different groups. At EAAFP’s Eighth Meeting of Partners (MOP8) in Hokkaido, Japan in January 2016, we introduced an interactive exercise, in which participants were divided into groups, such as different categories of Partners, Secretariat staff and scientists, and asked to respond to a series of questions and discuss these. The benefit of this kind of exercise, apart from getting people out of their seats and moving around, is to facilitate interactive discussions among participants around a set of stimulating issues. In this case, it was personally interesting to me to debate on the communication tools (resulting in these monthly newsletters, for example) and to learn that participants thought it equally, if not more, important to make sure current Flyway Network Sites were well-managed, rather than increase the number of such sites. 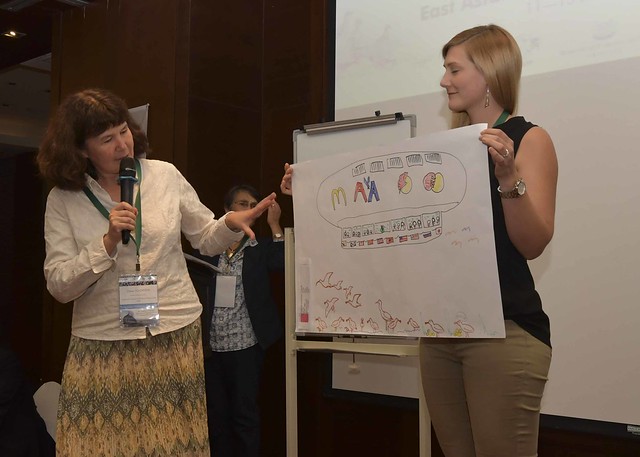 We are on the airship EAAF © Eugene Cheah/EAAFP

Feedback on the interactive session at MOP8 was positive, so for the Ninth Meeting of Partners (MOP9) we worked again with the EAAFP CEPA Working Group, led by Sandra Hails, to design further interactive sessions in Singapore. Since a new Strategic Plan was proposed for development post-MOP9, we decided to focus one session around a long-term vision for both the Flyway and the Partnership, and a second one around how to improve engagement of EAAFP Partners and collaborators. A full report on the interactive sessions by the CEPA Working Group is being prepared and will be shared with the Partnership.

The visioning session was divided into two, with four groups literally drawing their visions, revealing amazing artistic talent among some participants, along with some more prosaic, yet imaginative, representations among others. Seven groups had to report back on what a successfully-implemented strategy would like ten years from now, in terms of the different elements and achievements. One common thread was the linking of people, places and birds (“happy people, happy birds”) – heightening awareness, involvement and benefits, through community pride and action. A focus on children seemed to come up a lot (remembering that the children now may no longer be children in ten years’ time!). A strengthened, more connected and functional Flyway Site Network was also a key element of success, with linked communities and healthy landscapes. All the results of the interactive sessions have been documented and will provide important feedback to the Strategic Planning Task Force established at the MOP. 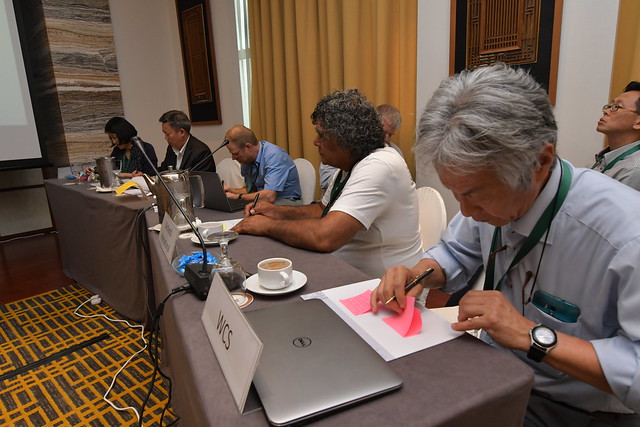 This second session, with participants in mixed groups, looked at identifying areas of their work for the Partnership that participants recognized as important for implementation but they were not able to deliver for a variety of reasons. Technical information and monitoring, along with engaging people at various levels as the main issues for implementation, followed by building partnerships, developing the Flyway Site Network and financing. As to why participants were not able to deliver, lack of time and/or funding were the main constraints, with lack of knowledge/capacity a less important factor.

As Sandra concludes “In this task the different implementer groups had to work together and in doing so shared their views and ideas about the diverse needs within the Partnership to improve the health of the flyway and its migratory species. This in itself is a useful learning process for implementers and an opportunity to broaden the understanding of implementation challenges and the need for effective management of the flyway by all implementers for broad success. In addition, the results indicate some of the weaknesses in implementation, identifying gaps in terms of knowledge and engagement that need to be addressed. While the need for funding as a key challenge to effective implementation was clearly acknowledged, it is also clear that implementers at the MOP do not really see this as a key task for them personally to engage in. This emphasizes the need for a robust plan fund-raising recognizing this as a specialist area that is not core to the work of many implementers”. 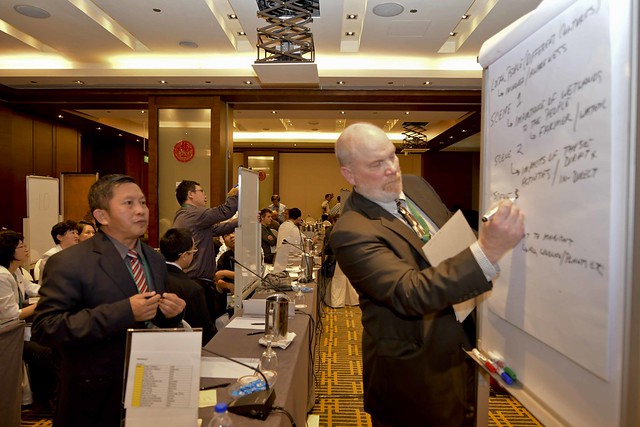 I would like to thank the CEPA Working Group for all the preparation and hard work that went into the interactive exercises at MOPs 8 and 9. Given the encouraging response, I am sure such interactive sessions will become regular features of future MOPs.