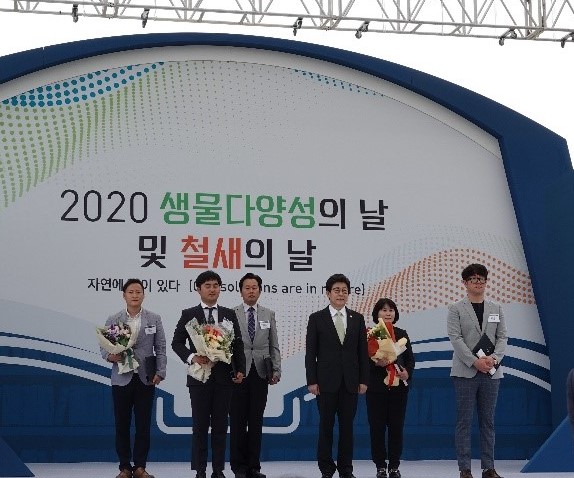 On 22 May 2020, a celebration for International Day of Biological Diversity and World Migratory Bird Day 2020 was held in Nakdong National Institute of Biological Resources (NNIBR), Sangju City, Republic of Korea, hosted by Ministry of Environment of Korea. With the theme “Our Solutions are in Nature”, the event emphasized biodiversity for conserving the environment and collaborated lives in harmony with nature. Deputy, Mr. Minjong Jeon and staff members of EAAFP Secretariat were invited to attend this event and The Minister of Environment Korea, Governor of Gyeongsangbuk-do Province and the mayor of Sangju City delivered congratulatory remarks. International Day of Biological Diversity is a United Nations international day for awareness-raising of biodiversity issues. The theme of this year “Our Solutions are in Nature” demonstrates that conservation of biodiversity enriches our lives based on its sustainable use. Mr. Myongrae Cho, the Minister of Environment of Korea, said “In celebration of International Day of Biological Diversity, we need efforts in conservation of climate crisis at the national level and biological diversity”, emphasized the importance of biological diversity at national level in the Republic of Korea and our lives in harmony with nature. The Ministry of Environment Korea, as a hosting country for the Secretariat, also has supported the organization of the World Migratory Bird Day ceremony every year rt since 2016 to raise public awareness about migratory waterbirds and globally highlight general issues of waterbirds worldwide. Mr. Cheolwoo Lee, the governor of Gyeongsangbuk-do Province, emphasized economic affairs has to put conservation of biodiversity at the national level into the account. “We will put efforts in sustainable job creation and economic innovation connected with ‘Green New Deal‘ by creating connection between employment and biodiversity in terms of urban restoration, culture, sports, and tourism, and welfare”, said Mr. Lee. He also emphasized economic innovation based on biodiversity, “Green New Deal policy will lead economic transition of country to low-carbon economy.”

** ‘Green New Deal’ is a new policy in Republic of Korea which deals with climate crisis and environmental issues. It also suggests a concept to economic, industrial and social policies, which steer the country to transform into a low-carbon economy. With increasing awareness and value of nature and biodiversity, the Ministry of Environment and local community are making effort to promote harmony with nature coexisting with human at national level, with launching upcoming projects, policies and conservation works. Gyeongsangbuk-do Province, where the celebration was held, has been managing a project for removing exotic fishes, promoted annually and constantly to get rid of thorn and beth which disturb ecosystem, while treat dispenser and shelter are offered at farmland around Gumi Hepyeong, a sites for migratory waterbirds.