Eaaflyway > News > Miyoung is migrating, but not too far!

Miyoung is migrating, but not too far!

When Ms. Miyoung Choi joined the Secretariat from Incheon City government in February 2014, she knew only one seabird and no shorebirds at all. The seabird was a “seagull”, most likely the Black-tailed Gull that is commonly encountered around tourist sites in Incheon. Three and a half years later Miyoung is proficient in identifying and counting shorebirds at high-tide roosts and active in the Black-faced Spoonbill network. And she can readily distinguish Black-tailed Gulls from the Saunders’s Gulls and Mongolian Gulls that breed around Incheon (although, like me, she still struggles with the plumage subtleties of the large white-headed gull complex!!). 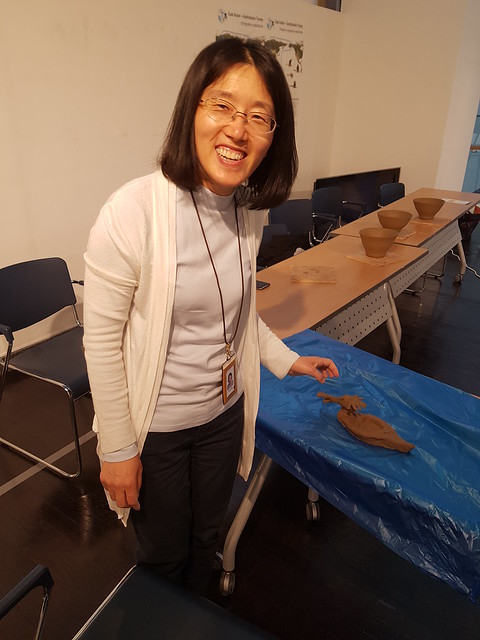 Miyoung came as Finance and Administrative Officer, so technical knowledge of migratory waterbirds was not a requirement. Her background was not really in finance either, so she quickly adapted to the financial management and accounting systems of an international organization and over time strengthened these. She maintained close relations with both Incheon City Government and the Ministry of Environment of Korea, facilitating fund transfers and reporting. She also provided feedback to the Chief Executive on meetings and recommendations of the Finance Committee and reported on the financial status of the Secretariat at MOP8 and MOP9. But most of all, she quietly and carefully ensured the smooth running of the administration and finance of the Secretariat. On our very occasional disagreements on details of administrative matters, it turned out that she was nearly always right, and could be very tenacious in defending her position! 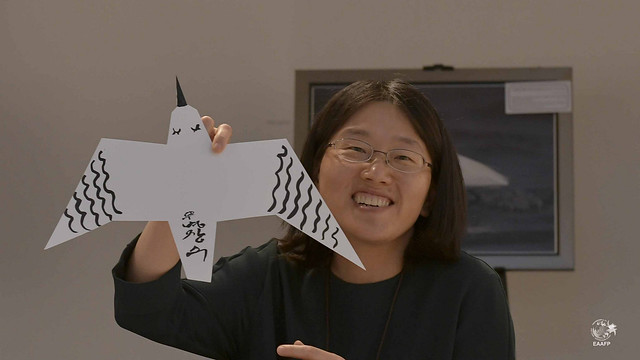 Miyoung is participating in calligraphy activity at WMBD © Eugene Cheah/EAAFP

Miyoung was a popular and well-respected member of the Secretariat and worked well with conservation NGOs around Incheon. She will be very hard to replace but the good news is that she will be located in the same building as the Secretariat, working on environmental issues for IFEZ, the Incheon Free Economic Zone, where Songdo is located. Already she is working with EAAFP on monitoring the breeding colony of Saunders’s’ Gulls in Songdo. She has committed to helping her replacement (when he or she arrives) learn the ropes at the Secretariat.  And the good thing for us (if not her) is that she is only a few floors away!