Migration of the Bar-tailed Godwit Y5RBRL 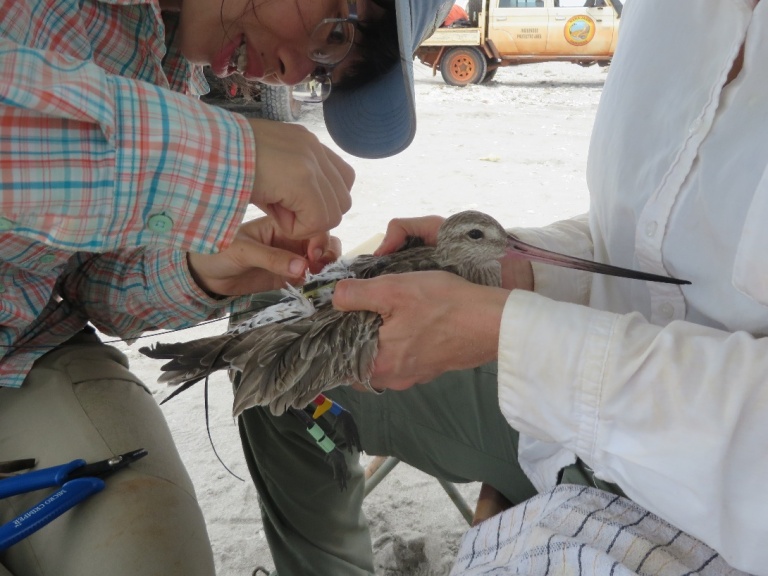 This is a story about the ten thousand kilometer journey of a Bar-tailed Godwit, travelling between the tropics and the Arctic, between pristine and industrial environments, and between different nations and cultures.

Some background facts: menzbieri godwits are somewhat largish shorebirds, who breed in the Russian Arctic and “overwinter” on the hot coasts of NW Australia, and therefore migrate along the coasts of the Yellow Sea in China twice a year. Many intertidal zones along this flyway are threatened. Tracking shorebirds (and their populations) with satellite transmitters on their annual migrations is necessary to target conservation action to the right places. From the tracks, we can identify the (remaining) crucial intertidal mud flats for long-haul migrants in China and along the East Asian-Australasian Flyway (EAAF).

Y5RBRL left Eighty Mile Beach [EAAF110] and made an impressive non-stop flight of more than 5,700 km to China. In five days she reached the Rudong coast (Tiaozini-Dongsha mud flats) in Jiangsu Province, where she stayed for about a week.

On 15 May 2017, our field team reports that they had sighted a Bar-tailed Godwit carrying a satellite transmitter in Diaokou Xiang, Lijin County of Shandong Province. Yueheng (a volunteer fieldworker) saw this special bird with an antenna sticking out. It is very special to actually see a bird with a satellite transmitter in the field, thousands of kilometers away from where you marked it.

Diaokou in southern Bohai Bay has been sampled for benthic prey and surveyed for birds since spring 2016. Another tagged Bar-tailed Godwit had stopped there last year. Y5RBRL stayed in Diakou until 25 May, a total of 22 days. It seems to be an important staging site, although we did not see big numbers in both years. It is difficult to find and approach flocks there, because there are a lot of fishermen working on the mud flats and we only had three days to do our work. More regular surveys in this area will be very informative.

From Diaokou Y5RBRL flew to her breeding grounds near Chersky in northern Russia. She didn’t flew non-stop, she stopped at several places in the tundra. Was she looking for a mate or a good place to breed? Or waiting for the snow to melt?

Finally she reached her breeding location! From our track we infer she stayed at this single site for 26 days. As our transmitters are in a cycle of 8 hours “ON” 25 hours “OFF”, she could have been there for 28 days. It is very likely she attempted to breed but our movement data cannot confirm whether this was successful. The egg-laying takes four days and incubation takes 21 days, so if her chicks hatched successfully, she would have left them for her partner to take care of the chicks. For shorebirds, it is not uncommon that one parent leaves the responsibility of raising the chicks to the partner.

After the breeding season she flew further north to the New Siberian Islands. She was at this site ‘fueling up’ for almost 16 days, to get ready for her southward migration.

Now as we write this in mid August 2017, Y5RBRL has returned to Diaokou for some more fueling. Obviously Diaokou is known to her as a good site to prepare for migratory flights.

What we are wondering now is if she will use the Tiaozini-Dongsha mudflats again before flying to Australia. Why is that such an important question? This staging site, which Y5RBRL used as first landing and refueling place after her long haul flight from Australia, is part of a huge ‘reclamation’ project and the mud flats will soon disappear. Ying Chi and colleagues used the local movements of Y5RBRL and 14 other tagged Bar-tailed Godwits to show that the planned industrialisation overlaps with the areas that the birds feed in on the Tiaozini-Dongsha mud flats and shoals. This result is presented in a Forum paper in Wader Study published by Global Flyway Network and colleagues in early August. We hope that the publication can urge the government to re-assess the plans. If we want to make sure Y5RBRL can keep using her favorite staging sites (and ca. 60,000 other godwits with her) action is needed.