While most scientists are proud of their breakthroughs, Dutch ornithologist Theunis Piersma, who discovered and named after himself a subspecies of the Red Knot (Calidris canutus), says he’s ashamed to talk about the creature. “I feel very proud to have these birds named after me, but I fear that they may actually become extinct in my lifetime,” the 54-year-old told a recent conference in the coastal city of Tangshan, Hebei province. The Red Knot subspecies piersmai is among many migratory shorebirds that make the inter-tidal mudflat in Luannan wetland a critical stop along their annual migrations from Australia to the Arctic.

As booming industry continues to devour the mudflat – one of Bohai Bay’s last – these birds are losing the key resting site of their migrations and will likely face extinction.

Bohai Bay has been an important “gas station” for millions of migratory birds, including many rare or endangered species, Zhang says.

The professor has researched shorebirds and environmental changes in the area for more than 20 years.

“Mudflats in this area provide these birds with the necessary food and habitats,” Zhang explains.

“The rapid reclamations of mudflats have directly threatened their survival.”

As mudflats along the bay rapidly vanish, migratory birds concentrate in higher density in the Luannan wetland.

More than 200,000 birds from about 60 migratory species, including many endangered species like Relict Gulls and Spoon-billed Sandpipers, make the mudflat their stopover or wintering site, Zhang says.

His team discovered that, in 2010, 62 percent of the Red Knots’ and 23 percent of the Curlew Sandpipers’ populations along the East Asian-Australian Flyway stopped at the wetland.

The flyway stretches eastward from the Taimyr Peninsula in Russia to Alaska in the United States, and its southern end encompasses Australia and New Zealand. Between these extremes, the flyway covers much of eastern Asia, including China, Japan, Korea, Southeast Asia and the western Pacific. It passes through 22 countries and is a travel route for about 55 migratory species, which equals about 5 million birds.

In 2009, more than 7,000 Relict Gulls – about 61 percent of the global population – and 18,000 Eurasian Curlews, a nearly threatened species according to the International Union for the Conservation of Nature and Natural Resources, wintered there.

“About 20 of 40 species of shorebirds passing through the narrow mudflat exceed 1 percent of their respective populations,” Zhang says.

“This makes it an extremely important wetland by international standards.”

The concentration of birds also demonstrates how rich and irreplaceable the 20-km-long, 3-km-wide mudflat is. The mudflat is a blessing for local villagers, too.

Beijing Normal University ornithology doctorate candidate Yang Hongyan says: “A very interesting phenomenon is that the shorebirds and local fishermen harmoniously share the narrow but rich mudflat, and the birds are OK when fishermen handpick shellfish.”

Yang’s research shows the shellfish harvest accounts for 80 percent of the income of Beipu, a fishing village of 300 people.

But locals, such as 59-year-old Zhu Yunuan from nearby Nanpu village, worry these days won’t last.

“Nearly everyone in my village collected shellfish before,” Zhu says.

“But the mudflat is too small now. So we often sit at home and do nothing on days we don’t fish.”

About 30 percent of the village’s incomes comes from clam harvests, Yang says.

Zhu and her husband could harvest about 300 yuan worth of shellfish on peak days, and the rich mudflats would sustain the harvest from spring to autumn. But they’ve been claimed for bridges, roads and manmade islands.

“We’ve heard our village might be relocated because the government is planning a new development zone here,” Zhu says.

“We’re worried because my family doesn’t know any other way to make a living other than fishing.”

Reclamation, which often pipes sand from the mudflats into the levees, seriously damages the remaining wetland, Yang says.

It has turned the mudflat between Luannan’s Zuidong and Nanpu villages, one of her research sites, into an unsuitable habitat for shorebirds since 2011.

Yang predicts the number of shorebirds, especially Red Knots and Curlew Sandpipers, will continue increasing at her study sites in the Luannan wetland.

“But when their population exceeds the mudflat’s capacity or if the area is claimed, the flyway populations will decline, and two of the six Red Knot subspecies will be endangered,” Yang explains.

Reclamations along the Bohai Bay have continued to increase because of pressure created by local population growth and economic development. Luannan wetland is a microcosm of the challenges the mudflats face.

Satellite photos from the Chinese Academy of Sciences show Tianjin and Tangshan reclaimed 649 sq km of mudflats, 34 percent of the total along northern and northwestern Bohai Bay, from 1994 to 2010.

Other cities are eager to copy the model. A new reclamation project in nearby Cangzhou, Hebei province, will claim another 117 sq km of mudflats, local media report.

Luannan wetland is located between the expanding Binhai and Caofeidian new areas.

To draw public attention to the need for more sustainable coastal development, Beijing Normal University and the China branch of the World Wide Fund for Nature (WWF) co-organized the conference in May 2012. Ornithologists, conservationists and Chinese scholars attended.

WWF China’s marine program officer Wang Songlin says the Luannan wetland already meets international standards for “wetlands of international importance”. The Ramsar Convention, adopted in 1971, is an intergovernmental treaty that provides the framework for national action and international cooperation for the conservation and wise use of wetlands and their resources.

“We urge the local government to set up a protected area in the Luannan mudflat and apply for the status as a wetland of international importance as agreed by the Ramsar Convention when the time is right,” Wang says.

“It deserves the recognition. This is not just for these shorebirds but also for the welfare of us and our future generations, if you consider this wetland’s ecological function as the ‘kidney’ of the Bohai Sea.” 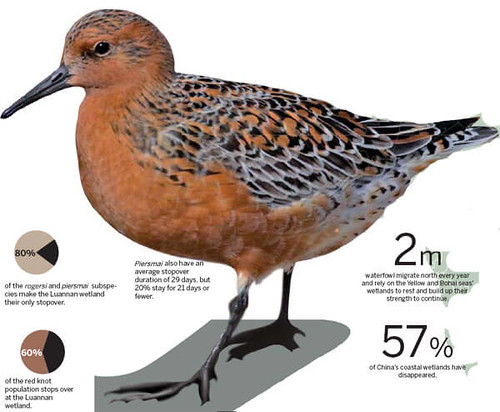 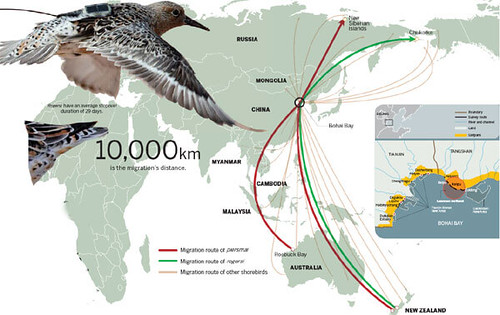 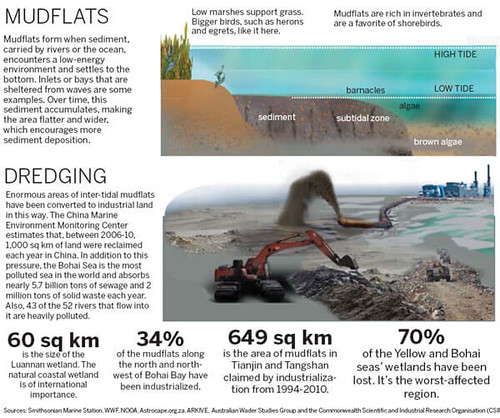 Related news: China’s land reclamation is endangering some of the world’s rarest waterbirds