Republic of Korea’s Comprehensive National Survey on Marine Ecosystems similar to a “medical check-up” for the ocean will be conducted for the second time after the first survey done last year.

A representative from the Ministry of Oceans and Fisheries (MOF) said on the 21st of February that they will conduct ‘Comprehensive National Survey on Marine Ecosystems 2016’ to understand the characteristics and changes in marine ecosystems in Korea’s seas systematically and comprehensively.

This year’s target area is the East Sea, the area in the southeast and around Jeju.

MOF has divided the marine territory of Republic of Korea into two, and is leading the Comprehensive National Survey on Marine Ecosystems every two years in each area.

Last year’s survey of tidal ecosystems found 403 species of benthic organisms and 53 species of shorebirds, including 8 species of legally protected species such as Black-faced Spoonbill and Chinese Egret, proving the value of the tidal habitat.

Last December MOF held a symposium involving experts from academic institutes and NGOs about the conservation of Yellow Sea coastal wetlands and shorebirds. MOF has adopted a declaration which included the expansion of monitoring and strengthening of international cooperation. 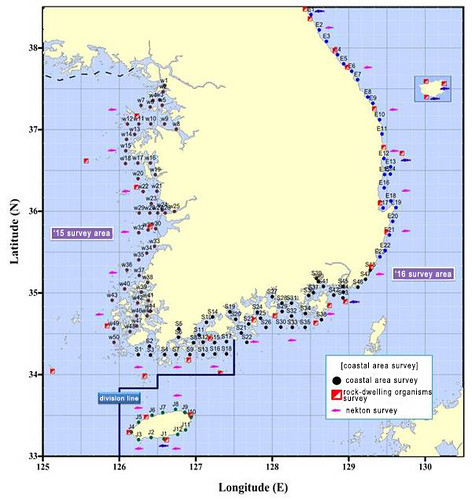 Surveys for shorebirds, which are in urgent need of protection, will be conducted twice this year throughout the Korean marine areas including Jeju Island. The survey will record species composition (taxonomic group composition of species that form a biotic community) and population characteristics of legally protected species including sandpipers and plovers.

According to MOF, this survey will be conducted in the areas vulnerable to climate change, have excellent underwater ecosystem or with high social importance.

This year MOF plans to expand the survey to study the distribution of marine organisms and monitoring of corals near Ulleung Island and Dokdo Islets, South Sea EEZ etc.

The chief of Marine Ecology Division, MOF, Seung-jun Park said, “the Comprehensive National Survey on Marine Ecosystems is an important survey. We will make an effort to survey the whole area every year to obtain time series data from marine ecosystems”.

Meanwhile, MOF is thinking about ways to utilise the survey results after their full review and analysis.

One of the MOF officials said “we will try our best to sustain the health of our marine ecosystems through the Comprehensive National Survey on Marine Ecosystems, similar to a medical check-up of our ocean” and added “we will attempt to restore damaged ecosystems if needed, according to the survey results”.

To read the original article (in Korean), please click here.