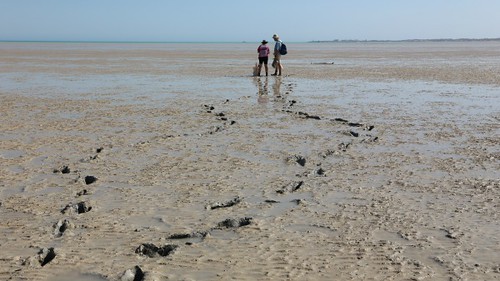 Professor Theunis Piersma’s footprints on the mudflats of Roebuck Bay [EAAF111] and Eighty Mile Beach [EAAF110] marked 20 years of continuous international collaboration and research in the region in October of 2016.

Australia contains one of nine flyways for migratory shorebirds of the world that is under growing pressure from habitat loss and degradation of intertidal ecosystems.

Speaking at the Science on the Broome Coast series, the visiting Professor Theunis Piersma of the NIOZ Royal Netherlands Institute of Sea Research presented findings from ongoing research that indicate an alarming population decline in migratory shorebirds using the East-Asian Australasian Flyway.

According to Professor Piersma, ‘a benthic invertebrate dataset is being amassed from the results of monthly mud sampling in Roebuck Bay since 1996, in collaboration with Broome Bird Observatory and Parks and the Wildlife Yawuru joint management team. Community volunteers and scientists have sieved mud from 2,000 locations, and found a staggering 50,000 invertebrates.’ These invertebrates include incredibly, colourful topshells, tiny mudwhelks and snails, and can reach an abundance of 3,000 animals per square metre in Roebuck Bay’s intertidal mudflats.

Sadly, Professor Piersma’s studies are showing a significant decline in populations of migratory knots and godwits. Professor Piersma says, ‘habitat loss and environmental degradation of the Yellow Sea mudflats is the key factor in this downward spiral.’

As a world leader, and award-winning published scientist in wetland and waterbird ecology, Professor Piersma’s take home message is, ‘don’t take Roebuck Bay for granted, since this remarkable embayment has the richest intertidal mudflats in the world’.

This innovative Science on the Broome Coast series is hosted by the Roebuck Bay Working Group and Yawuru Land and Sea Unit in Broome, and sponsored by Inspiring Australia, Rangelands NRM through the Federal Government Landcare program, State’s Natural Resource Management through Royalties for Regions, Western Australian Marine Science Institution, Department of Parks and Wildlife and University of Notre Dame Broome.