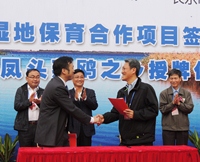 Mr. Adam Koo (on the right), CEO of WWF-Hong Kong, signing an MoU with Mr. Hangxing Chen, the Vice Mayor of Changle City in the Project Launch Ceremony © WWF-Hong Kong

Minjiang Estuary, located at Changle City of Fujian Province, China, and at the mid-point of EAAF, is an important stop-over and wintering site for more than 50,000 migratory waterbirds. Moreover, it is the only site in China where critically endangered Chinese Crested Tern and Spoon-billed Sandpiper, and the endangered Black-faced Spoonbill can be recorded regularly every year.

The ecological importance of Minjiang Estuary has been known for a long time. Ten years ago, a nature reserve at county-level was established, and it is being upgraded to the national level now. This reflects the recognition of the importance of the site, as well as the commitment to protect the sites from the Chinese Government. Although a Management Bureau was set up in 2007 with the approval from the People’s Government of Fujian Province, managing a 2,100 ha wetland wisely and effectively is never an easy task.

In view of this, WWF-Hong Kong, which has successfully managed Mai Po Nature Reserve in Hong Kong for more than 30 years, and the People’s Government of Changle City launched a 5-year Fujian Minjiang Estuary Wetland Conservation Cooperation Project in July 2012. The project aims at building the wetland management capacity of the Management Bureau, encouraging the wise use of wetland resources by the local people and raising public awareness of wetland conservation. Since the project started, staff from the Bureau have been trained in Mai Po so as to improve their knowledge about wetlands, equip them with the skills in conducting waterbird and water quality monitoring, and initiate the development of a management plan for Minjiang Estuary Nature Reserve. A study tour was also organized for the local government officials in Changle City to let them understand how wetland conservation and education work are carried out in Hong Kong.

At the moment, a 5-year management plan for Minjiang Estuary Nature Reserve is under development. Local stakeholders such as local village committees, villagers, birdwatching societies and various government departments will be invited to attend workshops on management planning to give their comments. Surveys for collecting socio-economic information of the local communities will also be conducted in order to investigate the economic dependency of the local communities on the wetlands and their resources and explore ways to use the wetlands wisely.

Since Minjiang Estuary is one of the eleven selected sites in the Flyway Project of Rio Tinto-BirdLife International-Wetlands International, cooperation between the two projects can be looked for in the future.