Joint Shorebird Survey of the Onchon County Coast of DPRK 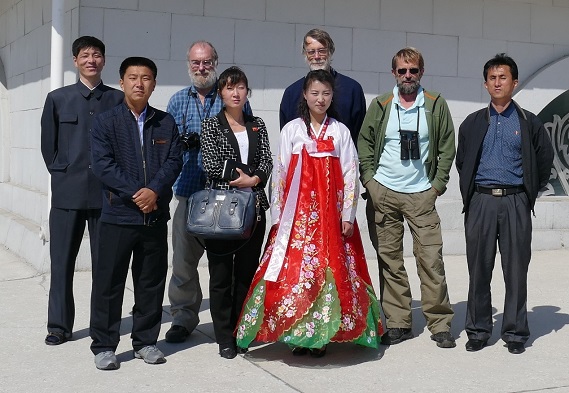 Each year hundreds of thousands of migratory shorebirds stage in the Yellow Sea region during their annual migration between non-breeding sites in Australasia and breeding sites in the Arctic. Since the 1990s important shorebird sites on the coasts of China and the west and south coasts of the Republic of Korea have become relatively well known, but the situation on the coast of the DPRK remains largely unknown. In April 2009 the Korean Natural Environment Conservation Fund (NCUK) and Pukorokoro Miranda Naturalists’ Trust (PMNT) completed a joint survey of shorebirds at Mundok, 80 km northwest of Pyongyang. This was the first known survey of birds using tidal areas of the Yellow Sea of DPRK. In 2014 a joint agreement was signed in Pyongyang between NCUK and PMNT to expand this work with a series of shorebird surveys along the Yellow Sea coast, starting in 2015. From 5-7 May 2015 three members from PMNT joined NCUK staff to complete a three-day survey, timed to take advantage of high spring tides. NCUK  selected a coastal area just north of the port city of Nampo in Onchon County. Late April and early May are the period when maximum numbers of migratory shorebirds are likely to be present and so each survey will be conducted during this period. The weather was clear and dry, making for good observational conditions. The purpose was to find key high-tide roost sites along the Onchon County coast and identify and count all shorebirds in the area. When time and local conditions permitted, the team also looked for flags and colour bands on shorebirds from other countries of the East Asian-Australasian Flyway. This visit by PMNT was supported by funding from East Asian-Australasian Flyway Partnership (EAAFP).

A total of 20,635 shorebirds was recorded at three sites, two of which were identified as being internationally important. Major species were Great Knot (7600 individuals), Dunlin (7419), and Bar-tailed Godwit (2794).

Table 1 summarises the species and totals for the three count sites. The counts at sub-roosts and main roosts at each site are combined, as on each occasion the birds on the sub-roosts moved to different areas to roost and were not counted again. Incidental counts are also included, as these birds were generally in ponds and creeks away from the main count areas. A total of 20,635 shorebirds of 31 species were counted. Other outcomes from the visit The PMNT and the NCUK wish to thank Carol West and Bruce McKinlay for assisting in setting up this multi-year project in 2014 and to New Zealand’s Department of Conservation and the Ministry of Foreign Affairs and Trade for funding the 2014 visit to the DPRK. We are also very grateful to the EAAFP for helping considerably with funding the DPRK 2015 survey.