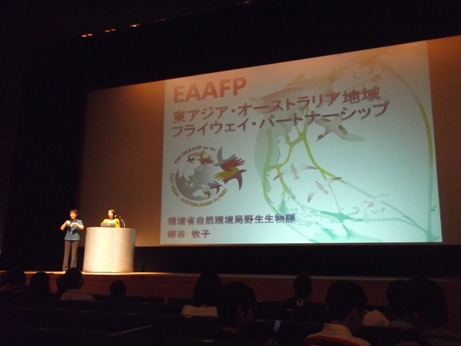 Arao-higata was added to the EAAFP Flyway Site Network (FSN) on 30th June 2013. Arao-higata is located on the eastern side of Japan and is the largest single tidal flat in the country. As this site supports many internationally important migratory waterbirds, it is highly recognised as one of the crucial sites along the EAA Flyway that allows migratory waterbirds to continue their journey between breeding and non-breeding grounds.

In Arao City, about 1,000 citizens and media were invited to celebrate the designation. Mr. Junji Maehata, the mayor of Arao City, was presented with the nomination certificate by Mr. Zuiten Tsukamoto from the Ministry of Environment, Japan. The Mayor said “We have been pushing conservation and wise use of Arao-higata. We are now very glad about the designation and will continue to follow up conservation activities to manage this valuable site in Arao City. Mr. Zuiten Tsukamoto 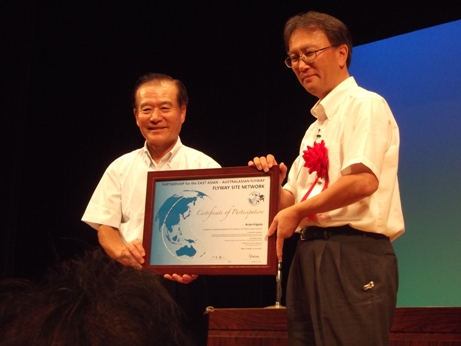 from Ministry of Environment, Japan also added that together with Arao City, Japan has been putting a lot of effort to this FSN designation and are also very happy for Arao City. We expect that this designation and further conservation can contribute to raise the number of migratory waterbirds including internationally endangered species, working together with EAAFP and its Partner countries along the flyway.

Now, the local community and stakeholders in Arao City regulary meet together to discuss on habitat conservation and management and awareness activities. Visit to find more information on Arao-higata at EAAFP Site Information Sheet and at Ramsar Site.