Last year, representatives from WWF Germany Wadden Sea office and the Hong Kong Bird Watching Society (HKBWS) formed a team to join the EU-China NGO Twinning programme. During the exchange programme, the twinning partners visited each others’ place to learn about the wetland conservation in China and the Wadden Sea.

Q1. Anja, How did you and HKBWS be linked up and join this programme?

Anja: I read about the EU China NGO Twinning Program – funded by the German foundations “Stiftung Asienhaus” and “Robert Bosch Stiftung” – some months ago and immediately thought that this would be a great opportunity for cooperation with a Chinese NGO focusing on nature conservation around the Yellow Sea. I had already been engaged in a Memorandum of Understanding between the European Wadden Sea and South Korea for some years and new about the importance of the Yellow Sea as a vital stopping place for migratory birds along the East-Asian-Australasian Flyway.
Colleagues of the EAAFP brought me in touch with Vivian Fu from HKBWS and we quickly realized that our work for the conservation of wetlands along important flyways has much in common and that we would be able to learn a lot from each other.

Q2. Anja, what have you learnt from the trip in China?

Anja: I have seen several remarkable initiatives of nature conservation and awareness raising activities and was impressed by the professional engagement of local NGOs, foundations and scientists. It was encouraging to see that there are – in an environment of rapid growth and economic development – also concern about and initiatives for nature, biodiversity and sustainability.

Q3. What challenges and advantages did you find in the Yellow Sea in China as compared to the Wadden Sea?

Anja: The economic pressure and the political situation around the Yellow Sea are certainly huge challenges for a large-scale and trans-boundary protection as it has been achieved in the Wadden Sea over the last decades. But the many local and regional initiatives for conservation and the ambition of both the Chinese and South Korean government to nominate parts of the Yellow Sea coast as World Heritage Sites certainly constitute a promising basis for an increasing awareness of and responsibility for the protection of this precious nature area.

Q4. If you can think of anything that can link the people and organizations from the two flyways together, what would it be?

Anja: Exchange activities such as the EU China NGO Twinning Program, mutual study visits and joint workshops on issues of common concern in e.g. science, monitoring, education and eco-tourism can provide opportunities to exchange experience and ideas and raise the profile and quality of wetland conservation on a global scale. Jointly developed educational resources such as posters, brochures and games that link the flyways in interesting and inspiring stories can contribute to an increased public awareness and support for international conservation efforts.

Q5. What is the most unforgettable thing about your trip to Hong Kong and China?

Anja: Spotting the Spoon-billed Sandpiper at the coast of Jiangsu was definitely the most impressive experience of my trip. This critically endangered species not only symbolizes the beauty and value of biodiversity, but also the efforts needed to protect it along with all the other species and their habitats along the entire flyway. Having had the chance to see these tiny birds foraging and resting is not only a huge privilege but also a strong motivation to further engage in the international cooperation on the protection of wetlands worldwide.

Q6. Now to Vivian’s turn, what have you done during your trip in the Wadden Sea?

Vivian: There were lots that I have experienced! For examples, I participated in a National Park Ranger-guided “World Heritage Discovery Cruise” which has facilities on the ship for tourists to learn about life in the coastal wetlands; I visited at least 13 Wadden Sea visitor centres in Germany, Denmark and the Netherland, and joined one of the popular activities, the mudflat walk, as well as their waterbird surveys. In addition, with my well-networked partner, Anja, I have a chance to meet people from the Common Wadden Sea Secretariat, learning about the Trilateral Cooperation of the Wadden Sea and the trans-boundary coordination in this UNESCO World Heritage Site. I also met many staffs of other NGOs and institutes involving in the Wadden Sea conservation and management.

Q7: Vivian, what have you learnt from the trip in the Wadden Sea?

Vivian: Despite being 8,000 km apart and located in different flyways, the European Wadden Sea and the Asian Yellow Sea region have a lot in common. Both sites are extremely important to waterbirds, and the mudflats are shared by three countries. The protection of the Wadden Sea has a history of over 50 years, there are lots to learn from. Learning how different countries and different sectors are joining hands to protect this important site and eventually established the UNESCO World Heritage Site was really inspiring. Seeing non-governmental organization (NGO) collaborated well with government and business sectors was especially encorauging. It was really a fruitful and inspiring trip, and what I learnt can be shared with colleagues.

Q8: What has the trip inspired you for your future work?

Vivian: As working for a local, I was happy to see that NGOs play an important role in conservation of the Wadden Sea. This motivates me to work harder to fill in gaps for conservation, we still have a lot to do. Also, I am convinced that collaboration is important. In addition, understanding more about our neighbouring sites is crucial because we are all interlinked. I look forward to any opportunities to work with people within our flyway and the Wadden Sea in the near future! 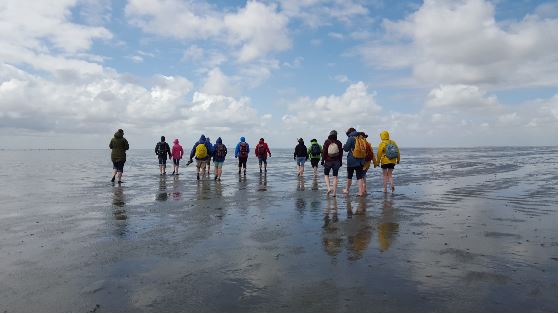 A popular activity of ecotourism in the Wadden Sea, a 7-hour guided mudflat walk, (with bare feet) , ©Vivian Fu

The EU-China NGO Twinning is an exchange program for the staff of European and
Chinese NGOs. Each year, the Robert Bosch Stiftung together with Stiftung Mercator
will award grants for 12 Chinese and 12 European NGOs which focus environmental
protection and climate change issues to take part in this exchange.
Deadline for single applications: 15th of April, for joint applications: 22th of April 2018
Webpage: https://www.eu-china-twinning.org/2018/03/call-for-applications-eu-china-twinning-program-2018/