The Arctic Migratory Bird Initiative of the Conservation of Arctic Flora and Fauna (CAFF) recognizes that to save Arctic breeding migratory birds, actions are required outside of the Arctic. For designated priority species, actions are proposed primarily at staging areas, identifying intertidal mudflats in the Yellow Sea as a key area. Similarly, the Australian Government’s recently published Wildlife Conservation Plan for Migratory Shorebirds identifies a series of actions to identify and help protect remaining intertidal areas of the Yellow Sea with support of the Governments of China and Korea, also acknowledging that actions outside of Australia are critical for the survival of shorebirds spending the austral summer in Australia. 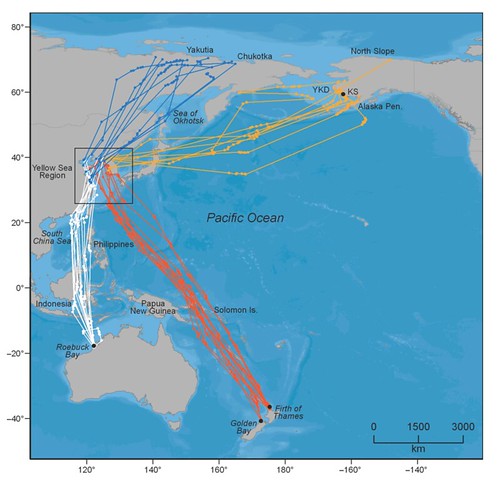 Given that sites in the Yellow Sea are critical to conserve migratory waterbirds shared by both Arctic countries and by Australia and New Zealand, what kind of cooperative actions and resources can be envisioned for joint conservation in the Yellow Sea? Could we imagine internationally-supported protected areas or joint management regimes at key Yellow Sea sites, where technical and financial resources are provided by different flyway countries to foster improved conservation outcomes, while obviously respectful of sovereignty issues? According to the EAAFP Eastern Curlew Task Force, the species has declined by 81% over the last 30 years. Only international cooperative action will save it.

Can we draw on the lessons from the East Atlantic Flyway, where the extensive tidal mudflats of the Wadden Sea, shared by Germany, Denmark and the Netherlands, also represent a critical bottleneck for migratory waterbirds on the their journey from Arctic breeding grounds to African non-breeding quarters? The whole area has been designated as a World Heritage site, and also links to other World Heritage sites in Africa, where many of the waterbirds spend the boreal winter.  The ecological parallel between the Wadden Sea and the Yellow Sea is remarkable. Not so the protection and management. The Wadden Sea has several levels of strict protection. However, the remaining fragmented tidal flats of the Yellow Sea are only partially protected and remain very vulnerable. The current initiative to begin a process of nomination of Yellow Sea tidal flats as a World Heritage site will face many challenges and take some time. Time that, at current rates of decline of waterbird, and particularly shorebird, populations, we can hardly afford. What chance then for a bold initiative designating key sites as truly international protected areas, with different countries contributing to their management? I’m not sure where this would fit among IUCN’s current list of categories of protected areas, but one thing seems sure and that is that only rapid and targeted conservation actions at key sites will stabilize the populations of many of our declining waterbird populations.

Read the May 2016 newsletter: Here