Eaaflyway > All News > The irreplaceable habitat of Australia’s Moreton Bay to migratory watebirds, in particular to the Endangered Far Eastern Curlew

Australia’s Moreton Bay, on the coastal side the city of Brisbane, is a biodiversity hotspot. Its varied ecosystems support a vast array of fauna including three species of dolphins, nine species of whales, six of the world’s seven sea turtle species, dugongs, over a thousand species of fish, including sharks and rays, as well as thousands of species of invertebrates. The biodiversity and ecological significance of the area have led Moreton Bay to be recognised globally as a Ramsar Wetland of international importance and a Key Biodiversity Area (KBA).

The Far Eastern Curlew, the world’s largest migratory shorebird, is a coastal obligate, feeding and roosting on and near expansive tidal flats only along the East Asian-Australasian Flyway. Recently, BirdLife Australia has recognised Moreton Bay as the single most important site in Australia for the Far Eastern Curlew. It regularly supports over 6% of the flyway population and is one of only two Australian Ramsar sites that supports overwintering juveniles.

Satellite tracking data[2], by the Queensland Wader Study Group (QWSG) corroborates the significance of Moreton Bay to adult and juvenile Far Eastern Curlew and has provided valuable insights about their home range and the site fidelity juvenile birds demonstrate to local inter-related sets of feeding and roosting sites. In 2018 researchers from QWSG captured and tagged three Far Eastern Curlews, part of a flock of approximately 1800 birds in Moreton Bay, and have been monitoring their movements since.

One of the birds monitored in the study – a juvenile, leg flag ID “AAJ” – skipped its northern migration, remaining in Moreton Bay for the entirety of 2018 and 2019. During that time, she visited several foraging and roosting sites throughout the southern parts of Moreton Bay (represented by green points in the map below). Clusters of points show the areas most frequently occupied by AAJ with key roosting sites including a sandbank near Toondah Harbour. An adult bird also monitored while overwintering in Moreton Bay (leg flag ID “AAK”) was found to have far more restricted movements concentrated between the northern parts of North Stradbroke Island and Geoff Skinner wetlands on the western coast of Moreton Bay (represented by yellow points). 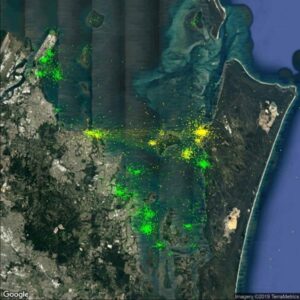 Figure 1. Movements within the southern part of Moreton Bay. AAK and juvenile AAJ

We know that Far Eastern Curlew has high site fidelity, returning to the same areas year after year, and the results of QWSG’s satellite tracking study demonstrate this site fidelity in a local context emphasizing the important links between feeding and roosting behaviour for adults and juveniles. Ensuring that these birds have a network of well-managed and protected feeding and roosting sites is critical for their ongoing survival and eventual population recovery.

Sadly, like many migratory shorebirds along the Flyway, Far Eastern Curlews have experienced significant declines in their populations over the last 30 years. According to recent study, the populations in eastern and southeastern Australia suffered an annual decline rate between 5.2% and 6.7%. Large-scale coastal wetland destruction from land reclamation and development projects is one of the biggest contributors to the decline in their numbers[3].

Despite Moreton Bay’s ecological importance for shorebirds, the threat of ongoing coastal development looms.  Of particular concern is a private real estate development proposal at Toondah Harbour that would replace Ramsar wetlands and important Far Eastern Curlew feeding habitat with a large apartment complex. Compromising a Ramsar site to facilitate real estate development in this way is unprecedented in Australia. BirdLife Australia, Queensland Wader Study Group and our partners will continue to work to ensure that migratory shorebird habitat is conserved. 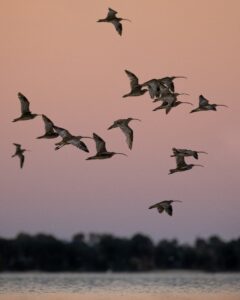