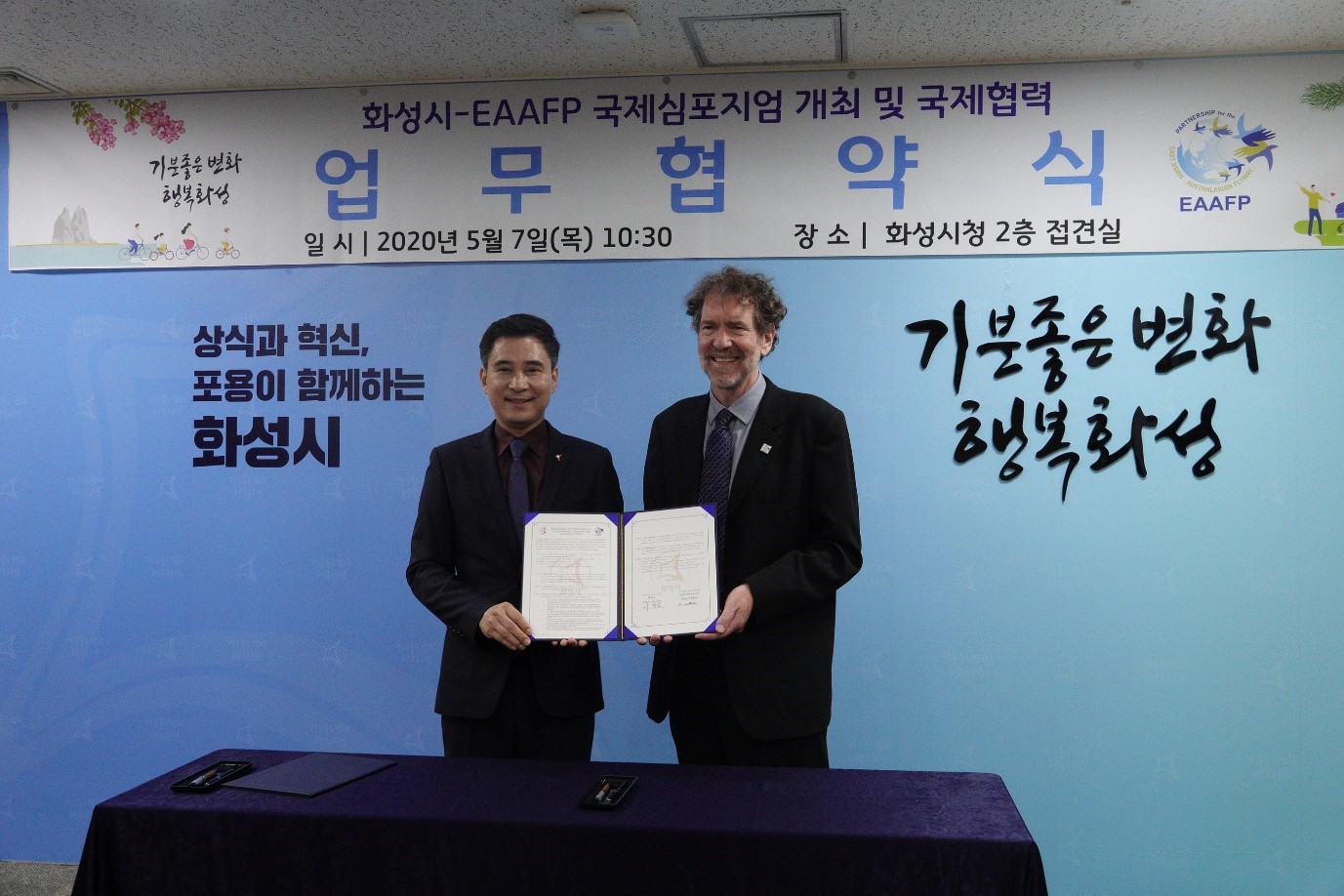 On 7th of May, 2020, Hwaseong City of Republic of Korea and EAAFP Secretariat signed a Memorandum of Understanding (MOU) on Hwaseong Wetlands [EAAF 142] and its migratory waterbirds of the East Asian – Australasian Flyway. Hwaseong Wetlands joined the Flyway Site Network during the opening ceremony of MOP10 of EAAFP, in December 2018. This MOU aims to develop collaborative projects at Hwaseong Wetlands for the conservation of migratory waterbirds, in particular Far Eastern Curlew. Activities will include an International Symposium late in 2020, twining with an EAAFP Sister Site, supporting the implementation of the International Single Species Action Plan for the Conservation of Far Eastern Curlew, and producing promotion and education materials. Upon the signed MOU by the EAAFP Secretariat and Hwaseong City, both parties will collaborate to the conservation of migratory waterbirds, especially for Far Eastern Curlew, as over 1,000 individuals stage during migration at Hwaseong Wetlands. Also, Hwaseson City will actively promote the EAAFP Sister Site Agreement under the EAAFP Flyway Site Network and are looking forward to cooperation activities for the conservation of migratory waterbirds in the Flyway.

During the meeting followed by the ceremony, Mr. Doug Watkins, on behalf of the EAAFP Secretariat, remarked that this MOU will strengthen local engagement by generating activities at site-level. This collaboration is an opportunity for the Secretariat to build and share its experience with generating greater local community engagement with Flyway Network Sites.

Hwaseong City Mayor expressed gratitude to EAAFP Secretariat on the MoU. He mentioned that despite the current COVID-19 pandemic, he believed it was the chance to show the power and importance of nature by promoting the significance of migratory waterbirds and their habitats, such as Hwaseong Wetland, locally and internationally with the assistance of the EAAFP Secretariat.