There are 1,052 World Heritage Sites in the world – natural or cultural sites of outstanding universal values, which are designated by the UNESCO. On the Korean Peninsula, there are a total of 14 designated World Heritage Sites – 12 in the Republic of Korea (RoK) and 2 in the Democratic People’s Republic of Korea (DPRK). On October 12th the “International Workshop for World Heritage Nomination of Korean Island-type Tidal Flats” took place in Mokpo, RoK. The project managers of Hanns Seidel Foundation (HSF) Korea, Dr. Hyun-ah Choi and Felix Glenk, took part. 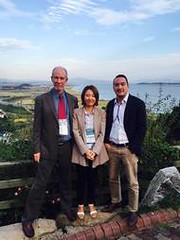 The workshop took place within the context of the process to designate Korean Island-type tidal flats in the southwest of the RoK as World Heritage Sites (WH). Experts from Great Britain, Denmark, Australia and Germany together with local experts discussed about a potential designation. The opening address was given by Woo Kyung Sik, Chair of the Steering Committee of the World Heritage Promotion Team.

Experts from Great Britain, Denmark, Australia and Germany together with local experts at the workshop © HSF

Jens Enemark, former Secretary-General of the Common Wadden Sea Secretariat talked about lessons learned from the Wadden Sea World Heritage Designation. The Wadden Sea is the world’s largest coherent barrier island system and is shared by the Netherlands, Germany and Denmark. The site was inscribed on the World Heritage List in 2009 for its outstanding universal value.

During the first session, Burghard W. Flemming of the Senckenberg Institute in Wilhelmshaven, Germany, focused more detailed on the comparison of the Wadden Sea and Korean tidal flats. After talking about similarities and differences between the European and different Korean sites, he concluded that “on account of their geographic, climatic, and physiographic setting”, and other characteristics, “the Korean tidal flats occupy a unique position in the world”.

Several Korean experts from different national universities focused on different aspects of Korean tidal flats, such as biodiversity, geology and geomorphology. Concluding the session, Spike Millington, Chief Executive of the East-Asian Australasian Flyway Partnership, spoke about the intertidal zones of the Yellow Sea as a critical bottleneck for migratory waterbirds in the East Asian-Australasian Flyway. He emphasized that the “loss of tidal flats in the Yellow Sea has resulted in precipitous declines of many waterbird species”.

International and Korean experts at the workshop © HSF

The Hanns Seidel Foundation Korea is a member of the East-Asian Australasian Flyway Partnership and is involved in different environmental projects on the Korean Peninsula. Especially in the DPRK the HSF tries to promote cooperation and exchange in the field of environment. A project with the Ramsar Secretariat focuses on wetlands, including tidal flats, and its conservation and wise use. At the workshop in Mokpo the project managers of HSF Korea, Dr. Hyun-ah Choi and Felix Glenk, shared the work of HSF in both Koreas and the current developments in nature conservation in the DPRK.