Eaaflyway > News > How to Protect the Birds That Fly the Farthest

How to Protect the Birds That Fly the Farthest

A new study in Science shows that almost all migratory birds are threatened somewhere along their ranges. 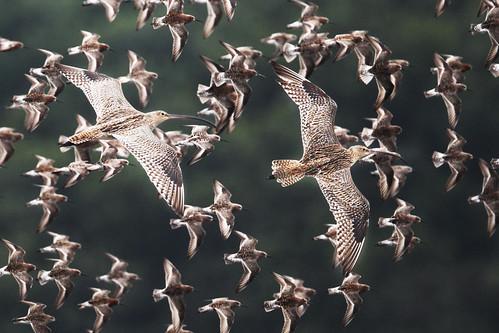 Far Eastern Curlews are just one of many migrating species that don’t have adequate protections. Photo: FLPA/Alamy

In autumn of 1792, English ornithologist Gilbert White was prying into an old thatched roof in his town of Selborne, England in search of sleeping birds. He was trying to find out where local swallows disappeared to each winter (he detailed his plight in his journal, now known as the Natural History of Selborne). Other naturalists, too, couldn’t fathom that birds fly to far off places like Africa each year: At the time it seemed more logical to assume they just slept underwater for the season. A 17th-century minister and scientist even thought they flew to the moon and back. And Aristotle theorized that Redstarts didn’t disappear—they simply transformed into Robins by winter .

White spent his life in searching for where the swallows really go, but it wasn’t until after he died (in 1793) that modern science revealed that northern birds can fly south each winter in search of a steady food source: “They leave us when this country can no longer furnish them with a supply of their proper and natural food,” natural history author Thomas Bewick wrote in the 1797 edition of A History of British Birds. For European Swallows, this means an epic journey to southern Africa (other birds take on equally heroic distances).

Migrators may inspire us, but they’re also most vulnerable to environmental degradation: more than half of these globetrotting species have declined in the past 30 years. And according to new research published in the journal Science yesterday, migratory birds’ extensive habitats don’t receive the same levels of protection from governments and conservation efforts, compared to birds that stay put—not necessarily surprising, given how extensive their treks can be, but troubling nonetheless.

“People have previously looked at the conservation of a species here and there,” says lead author Claire Runge of the University of Queensland in Australia, “but no one has really put the puzzle pieces together into one big picture like this.”

The researchers overlaid maps of protected habitats with maps showing bird distribution and ranges, and discovered that only 9 percent of some 1500 migratory species are properly protected in all of their habitats year round. By comparison, close to 50 percent of non-migratory birds live in protected areas.

“Migrants are more vulnerable,” Runge says. “They really need protection across both breeding grounds and non-breeding grounds as well as the sites they stop at in between.” Threats in any one spot of their yearly range can influence their entire population, she says.

For example, the Far Eastern Curlew is a big shorebird that flies down through Asia to spend its non-breeding season in Australia and New Zealand. In between, Runge says, it gets “absolutely smashed” at a mudflat stopover site in China, which is being rapidly transformed into agricultural land. Mudflats are being destroyed at a level that “rivals the destruction of the Amazon Rainforest,” Runge says, and it’s preventing the Curlews from being able to refuel on small crabs and molluscs in the area. As a result, the global Curlew population has dipped by some 6,000 individuals in less than 10 years, she says. Similarly, only 7 percent of Great Knot, a migratory shorebird that breeds in Russia and winters mainly in Australia, full range is covered in protected areas—and almost a hundred thousand Knots disappeared after a critical tidal flat stopover in South Korea was paved over thanks to development.

How to Protect Birds’ Entire Habitat

The reason for this conservation mismatch is somewhat obvious: Traditionally, habitat protection is planned at the country level, even though a bird’s range—particularly for a long-distance migrator—spans borders. Because of this, “increased cooperation is necessary” between countries, argues co-author Hugh Possingham, who is also the Director of the Australian Research Council Centre of Excellence for Environmental Decisions. In Central America, the authors point out, several countries have worked together to create cross-boundary protection plans for more than 75 percent of their migrants, but when these species fly back up to the U.S. and Canada, they’re heading into unprotected areas. Likewise, in Germany, nearly all of the migrants’ habitat is safeguarded—but when you consider the birds’ entire ranges, that drops down to less than 15 percent of species.

One thing that makes it even trickier to protect birds’ full ranges is that scientists still don’t know where many birds go for the winter. As technology improves, tracking small birds gets easier, as was recently successfully done for the Wood Thrush thanks to the dedication of some Audubon chapters. Similarly, when Audubon Louisiana noticed that their Prothonotary Warbler population was declining more quickly than the bird’s habitat was disappearing in the U.S., it “got us thinking that almost certainly there are threats outside of the U.S. that are contributing to the decline of the population,” Erik Johnson, the director of Audubon Louisiana, told Audubon this summer. The team tracked the warbler’s journey south and discovered that it ends in northern Colombia, where scientists can now target conservation work.

Right now, “there’s a lot of [international] coordination going on across The Convention on the Conservation of Migratory Species (CMS),” which is a United Nations environmental treaty, Runge says, but funding isn’t quite robust enough yet. Using already-existing networks like CMS, she says, or BirdLife International, countries like Germany can collaborate with the other half of their native birds’ home ranges by meshing together conservation funding and resources.

We now know that when birds take off each year, they’re relying on the health of other habitats. For birds, the places they visit—and the ones they stop in along the way—are all part of home. It’s global conservation’s job now to ensure that home is still safe for landing.