Eaaflyway > News > How simple striped sheets could save seabirds

How simple striped sheets could save seabirds 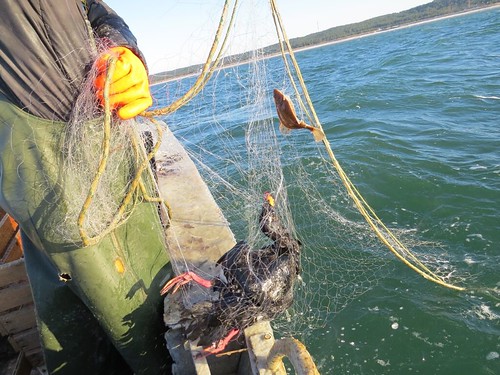 Every year, 400,000 seabirds worldwide are estimated to meet their end as a result of becoming unintentionally caught in gillnets while diving for food.

Gillnets are panels of near-invisible underwater netting used in rivers and oceans by fishermen the world over. They are so-called because fish get entangled by their gills as they struggle to escape, trapping them in place. Passive and easy to set up and maintain, they are an incredibly cost-effective to catch fish.

But unfortunately, fish are not the only ones to fall for the trick. A wide range of non-target species, or ‘bycatch’, also  end up captured in the nets, including seabirds such as Great Cormorant Phalacrocorax carbo, Humboldt Penguin Spheniscus humboldti and Velvet Scoter Melanitta fusca, the latter two of which are listed by BirdLife as Vulnerable on the IUCN Red List. As they are unable to re-surface for air, getting snared in these nets is a fatal mistake.

Reducing the number of birds caught in these fishing nets while still enabling fishermen to catch fish, then, presents a unique challenge for conservationists. To determine exactly why so many seabirds get caught, BirdLife’s Marine Programme decided what was needed was a bird’s eye view – not from the sky, but from underwater.

To further our understanding, Rory Crawford, Gillnet Programme Manager in BirdLife’s Marine team, got in touch with Dr Graham Martin, a sensory ecologist, to build a picture of what it is that birds are likely see when they dive underwater. The findings showed that the answer is, perhaps, not as much as you might think.

“We can conclude that birds do not see gillnets—they forage in low light levels, unable to see fine detail,” said Crawford. Consider that the Common Murre Uria aalge (otherwise known as the Common Guillemot) dives to depths of more than 100m, where little sunlight can penetrate. This means that they are effectively hunting in night time conditions, even in the middle of the day – so the prospects of detecting fine nylon mesh are minimal.

Armed with this information, Dr Martin was devised a potential low-tech solution to the problem: ‘stimulus warning panels’. These are strips of flexible material are attached to the nets at regular intervals, designed in striking alternating black and white stripes for maximum contrast. The theory goes that these should alert diving birds to the presence of the net. 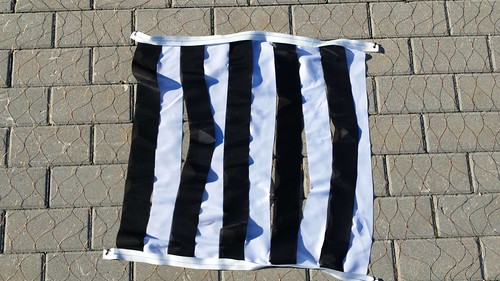 The only way to know for sure that they work, of course, is by putting them into practice. Inspired by the hands-on approach of BirdLife’s Albatross Task Force, who work directly with fishermen in ports and on ship decks across the Southern Hemisphere, a Seabird Task Force, thanks to funding from Fondation Segré, has been performing similar work with local fishermen in Lithuania for the last three years. The Lithuanian team have been conducting trials of the black and white panels, comparing them with standard fishing nets. Across the 2015/16 fishing season, the team was able to collect data from around 80 trips – and crucial to this success was their work in building trust with small-scale fishermen, whose vessels are too small to carry one of our observers.

“Personally speaking, I’m glad that conservationists and fisherman have found a way of communicating and working shoulder to shoulder” says Julius Mork?nas, who heads up the Seabird Task Force team for the Lithuanian Ornithological Society (BirdLife in Lithuania). “The trusting relationship we have means that many of the smaller vessels self-report their bycatch, doing the data collection themselves.”

While more data collection is needed this coming winter before any real conclusions can be drawn, the early results are encouraging; raw data suggest that bycatch is about a third lower in nets equipped with panels. Interestingly, fish catch increased significantly in nets with the panels compared to normal nets – clearly, it’s important for fishermen that their catch is not negatively impacted. 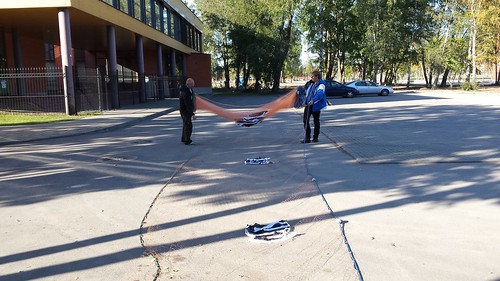 One of the nets being prepared in Lithuania. © Julius Morkunas

These black-and-white panels are now casting their net across the globe. Thanks to funding from the European Commission, SPEA (BirdLife in Portugal) are holding trials close to the Berlengas Islands, while the Wild Bird Society of Japan (BirdLife in Japan), thanks to the support of the Kingfisher Foundation and the Keidanren Nature Conservation Fund, is doing similar work off Teuri Island, Hokkaido, home to the world’s largest Rhinoceros Auklet Cerorhinca monocerata colony. Both these projects have gone through a preliminary testing phase to see if there are any operational issues with nets, and full trials will begin on commercial fishing vessels shortly.

There is still a long way to go in the search for a definitive answer to reducing that 400,000 toll, but there is cause to be hugely encouraged – not only by the success of the early trials in Lithuania, but equally importantly, by the great relationships that have been built with the fishing industry in each of these countries as we work together to reduce seabird bycatch to as close to zero as possible.

“When fishermen start to see bird bycatch as a problem not just in their own nets, but more widely, they start to think about how to reduce it, even suggesting their own ideas”, says Mork?nas. “For me, that’s really inspiring.”