Hardship for Natural Monument 201, human’s next

The survival of Whooper Swans is under threat, as wintering number have halved. 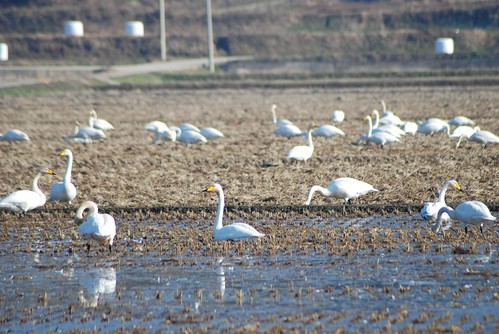 Wintering Whooper Swans feeding on a field near the Geum River ? Kyeongho Lee

It’s been a while since winter started. In mid-February, migratory birds that spend the winter in Korea start to return to the north. The conditions at the wintering site are very important for the birds to prepare for thousands of miles long migratory journey. Without adequate amount of food and rest, it is impossible to travel that far.

For this reason, migratory birds are very sensitive to the conditions at the wintering sites, because their lives depend on the environmental changes and the amount of food available. Wintering sites in Korea are a question of life and death for migratory birds, but the current situation is tough. Every year, great and small development projects destroy their habitat.

There has also been a big change in the habitat of the Whooper Swans Cygnus cygnus that visit the Geum River. The Geum River development project is responsible for this change. This project was supposed to save the Geum River but unexpectedly, it turned out to kill birds. Since the project was finished the number of birds visiting the Geum River has been declining consistently.

Above all, some populations of the protected Whooper Swan have drastically declined. This is a very valuable species, as it is designated as natural monument number 201. This precious swan arrives to the Geum River in late November or early December and spends the winter here until February when it migrates back to the north.

What use is being a natural monument… 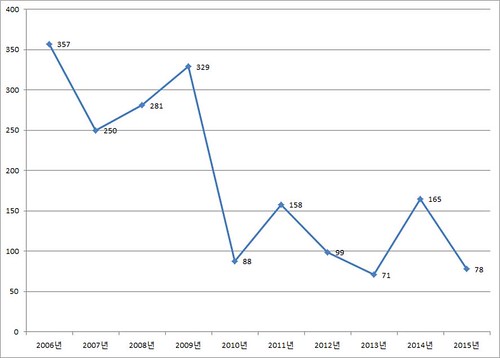 According to the research of Daejeon Federation for Environmental Movement (KFEM) and Hannam Association for Research on wild birds, 250-350 swans used to spend the winter here every year before the launch of the Four Major Rivers Project in 2008. However, after the project started, the number of Whooper Swans declined by half, to 71-158. As we can see in the graph above, the number of Whooper Swan is still declining. Until the early 2000’s, about 500 swans used to visit the area.

Their number declined to 300 in the mid 2000’s and declined even more to 100 after the beginning of the Four Major Rivers  Project. Eventually, only 78 swans were observed on December 21 when researchers surveyed wintering migratory birds on the Geum River. We don’t know how the numbers are going to change in the future. Unless the environment improves or something changes at the breeding place in Siberia, it is highly likely that the number of Whooper Swans will stay the same, around 100.

Whooper Swan is designated as a natural monument and a threatened species, but there is no use of the designation, when facing threats from development. The case above reflects the reality. We need to protect sites where legally protected species live and to put a brake on development projects. However, currently there is not much happening.

During the past two billion years in the history of the Earth, our ecosystem has maintained stability with the appearance and extinction of species. But now it is often said that the rate of extinction in modern society is 1000 times faster than in ancient times, when the earth maintained stability. Scientists estimate that currently every day 50 to 100 species become extinct. Even if there are plenty of species, such high rates of extinction signify that the extinction of humans won’t take long.

Would it stop with the extinction of the Whooper Swan?

It seems that Whooper Swans in the Geum River got dangerously close to extinction. We don’t know how long they will exist. It’s a crisis made by the Four Major Rivers Project. The project spent 22 trillion won (~17.3 billion USD) but there is no evidence that it has helped the Geum River yet. On the contrary, the Geum River is dying similarly to the Whooper Swan.

Whooper Swan is not the only species that faces extinction due to the project. Humans are too. If we are continuing development and non-realistic protection policies of threatened species, humans will soon go extinct, too. The decline of the Whooper Swan is the warning message. It is a serious problem that cannot be ignored.

It’s not too late to conserve the species and to stop the development that hopes to be another four rivers project. This is the moment to stop the insanity of development.