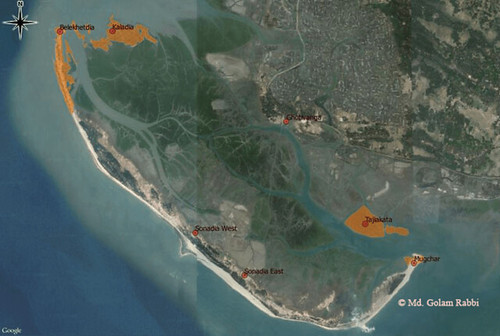 Sonadia Island[EAAF103] is located in south eastern Bangladesh, north-west of Cox’s Bazaar. Island was declared an Ecologically Critical Area (ECA) by the Government of Bangladesh in 1999 which includes Sonadia Island in its entirety and most of Ghotivanga Mouza in adjacent Moheshkhali Island. Around 4916 ha in area, the site is mostly government-owned land. In the past, land use was limited due to the effects of natural disasters, but the recent conversion of mangrove and mudflats to shrimp farming and salt pans has had a large impact on the current state of the site. The local community of around 1176 people is highly dependent on the natural resources of the site including agriculture, shrimp fry collection and fishing. Literacy rate is only 12.3%. (National Population Survey Report, 2011). There are no indigenous people on this Island. There is very little tourism or educational use of the site, however researchers have been attracted in small numbers mostly for mangrove, turtle and bird surveying. The site is rich in species despite its small size. The important habitats and communities at the site include mangrove, mudflats, beaches and sand dunes, canals and lagoons, and marine habitat. The site supports the last remaining remnant of natural mangrove forest in south-east Bangladesh. The site lies on the East Asian Australasian and Central Asian Flyways and the mangrove and shallow shoals surrounding the island provide an excellent wintering area for migratory waterfowl and shorebirds, including three globally threatened species. The sandy beaches and sand dunes support one globally threatened marine turtle species. Other important species include Irrawaddy dolphin and crustacean species, a wild grass relative of rice, fish and molluscs.