After the discovery of the new Spoon-billed Sandpiper site in Bangladesh in February 2015, Bangladesh Spoon-billed Sandpiper Conservation Project (BSCP) conducted a detailed survey between 5 and 11 December 2015. The team counted a total of 30,648 waterbirds of 43 species including 27,785 shorebirds of 26 species at three sites along the Sandwip coast of Chittagong division in southeast Bangladesh. 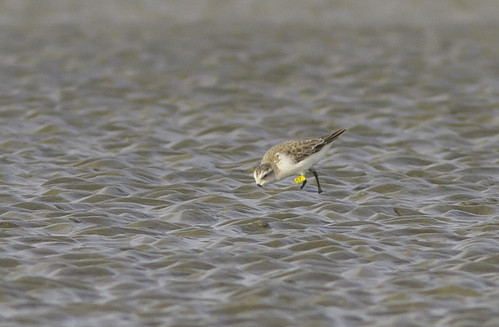 Yellow 57 at Sandwip © Sayam and BSCP

The BSCP team counted a minimum of 36 Spoon-billed Sandpipers including four marked birds and were able to read two flags – Lime Green 11 (adult female marked on her nest near the southern shore of Pekulneiskoe Lake, Russia in June 2014) & Yellow 57 (marked at Dongtai, China in September 2015). Other birds of global importance include the Endangered Spotted Greenshank (2) and Great Knot (15), Near Threatened Black-headed Ibis (137), Black-tailed Godwit (100), Asian Dowitcher (67), Curlew Sandpiper (780) and River Tern (2). The results further indicate that, currently this area is most important for globally threatened shorebirds in Bangladesh. BSCP hopes continue monitoring the sites in coming months and following seasons. 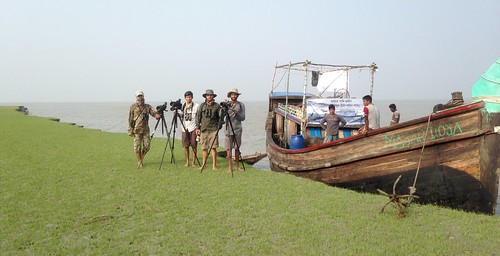