Eaaflyway > News > From the Manager: A Pilgrimage in Search of E7

From the Manager: A Pilgrimage in Search of E7

Manager Keith Woodley takes Lee Tibbitts, the Alaskan scientist who tracked E7’s recordbreaking flight to New Zealand, on a pilgrimage to Maketu Estuary in search of our most famous Bar-tailed Godwit

The shallow pools on the sandflats and among the seagrass presented us with a cloudless sky at our feet. Here at Little Waihi in the Bay of Plenty, we were exploring the back of the estuary, where numerous Paradise Shelduck and scattered flocks of two-legged godwits and stilts foraged. There were also Pied Oystercatchers and four Pacific Golden Plovers.

The birds and us all shared the same North American soundtrack, one that was particularly familiar to Lee Tibbitts: two strident and vociferous Canada Geese. It was my first visit to this splendid place but it was a diversion from our main interest, and the reason for our being in this region on a sunny Monday morning. And that interest lay over the hill, on the sandspit at Maketu. 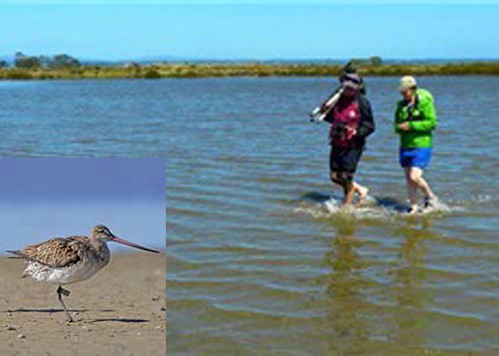 For Lee it was not unlike a pilgrimage, seeking completion to the story. She had tracked E7 over her migration in 2007 and had dispatched the regular email updates. Her name and that of that stellar bird had, for many of us monitoring the story, become almost fused together. Here was an opportunity to seek out this now one-legged godwit’s ‘retirement’ location.

That there was no sign of the bird was not unexpected: there had been no reliable sighting of her for many months. Lee nevertheless expressed satisfaction in just being here, in this place that had become so much part of the E7 story.

Lee also appreciated meeting our guide for the morning Tim Barnard. Tim knows the birds of this area as well as anyone, and it was he who first located E7 after she had abandoned the Firth of Thames [EAAF019] a few years ago.

Walking over the firm flats of Little Waihi perhaps gave a clue about why this became her new home. Possibly this firmer substrate makes it easier for a one-legged godwit to make a living than the super soft mud of the Firth.

A few days earlier Lee and I had been at the Espresso Café in Te Papa, speaking of that and other shorebird tracking stories, and the science and technology behind it. The Café Scientifique format was a first for both of us, but proved to be a very useful forum for exchanging information with the audience of about 80. I did a brief introduction to Pukorokoro Miranda Naturalists’ Trust (PMNT) and Year of the Godwit, and the migration story before passing over to Lee to describe her work. There followed a 70 minute session of question and answer.

As I had with Pavel Tomkovich in March I found myself back among the collections in the basement at Te Papa in Tory St. Back then it was clarifying identification of godwit and knot specimens to sub-species level. This time it was still wader-focused but now it was one of Lee’s study species, Bristle-thighed Curlew, that held out attention.

Alan Tennyson was puzzling over bones recovered from the Wairarapa coast. They were clearly that of a long-legged wader and Bristle-thighed Curlew seemed a likely candidate. The problem was the nearest record of the species in our area was a single bird seen on the Kermadecs. However, Alan has now concluded, after examining the bones under a microscope that they were the bones of more conventional species including a couple of oystecatchers. But as we all agreed it was a tantalising theory while it lasted.

Lee also addressed enthusiastic meetings at the Centre and the University of Auckland.