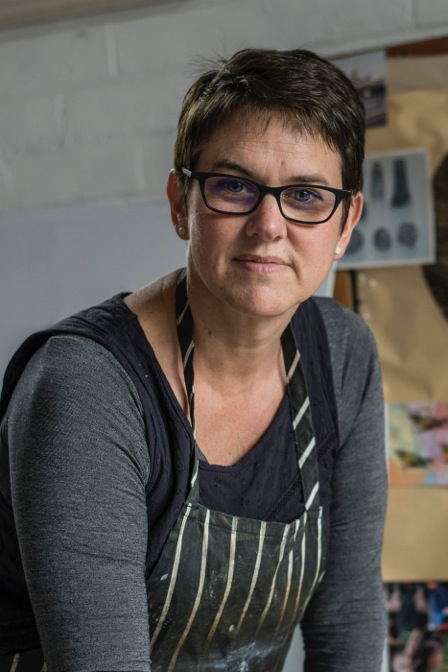 Flyway connects people. It makes people in a different field to get to know each other. Flyway also enables people to share their knowledge and experience. Therefore, EAAFP is starting a new project, ”Flyway: connecting people and migratory waterbirds” story series, to introduce people and interesting stories along the flyway. Our first interviewee is Ms. Kate Gorringe-Smith from Australia, an Art project coordinator of Overwintering Project and Flyway Print exchange. She shared her motivation to start Overwintering Project. Kate supported EAAFP’s production of the MOP 10 T-shirt. 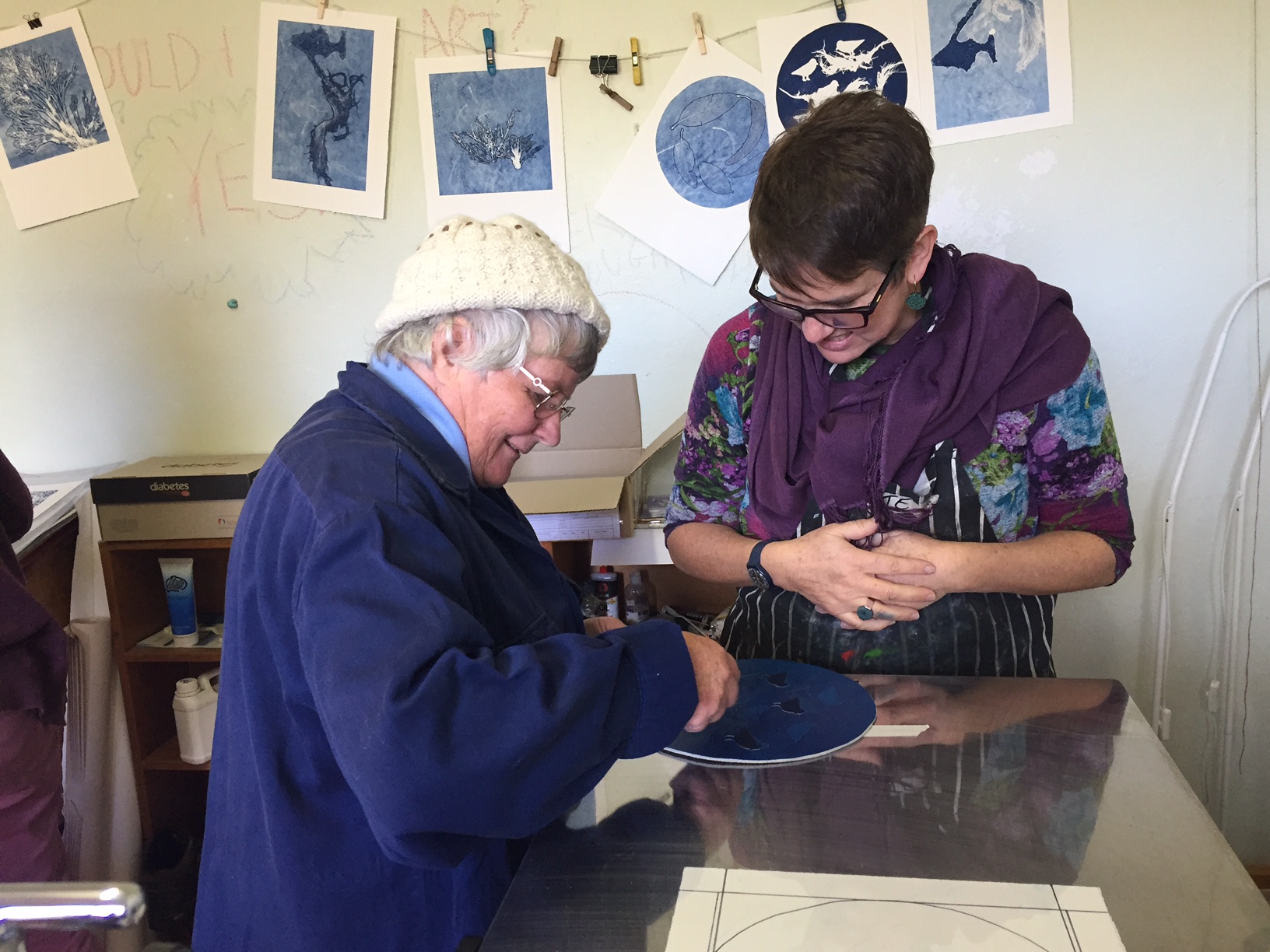 EAAFP: Ms. Kate Gorringe Smith, could you introduce yourself?

Kate: I’m Kate Gorringe-Smith and I am from Melbourne, Victoria in Australia. I first studied English and Zoology at university, which won me a job as assistant editor at BirdLife Australia. While there I pursued my other passion, art, gaining a degree from Melbourne’s Royal Melbourne Institute of Technology in printmaking. I’ve made prints ever since, mainly linocuts and etchings. For the last decade or so I have run a number of environmental art projects to raise awareness of migratory shorebirds, the East Asian-Australasian Flyway (EAAF), and the challenges they face.

EAAFP: What motivated you to start these art projects?

Kate: At first I became interested in migratory shorebirds as a metaphor for human migration. My parents came to Australia from the UK the year I was born and, despite the years passing and having a home and family in Australia, they still had a strong tie to England as home too. It made me wonder about the broader and harsher experiences of migrants and refugees.  I naturally became interested in the notion of ‘home’ and what that might mean.

Shorebirds are the perfect metaphor for this longing to be in two places, bound as they are to travel for survival between two hemispheres, ever restless. From there my interest spread to the birds themselves, the threats they face – habitat destruction, predation and hunting, climate change – throughout the Flyway, and the way they illustrate so beautifully the fact of our globally dependent ecology. I began to crea te projects that involved other artists to try and convey the idea of the Flyway and how we are all linked by the journeys of these amazing birds. This has grown into other projects to help raise awareness for migratory shorebirds generally. Artists make up the vanguard for the creation of awareness and action, and of course I hope that they will all become shorebird advocates! My current project, the Overwintering Project, so far has over 200 artists involved from around Australia and New Zealand. 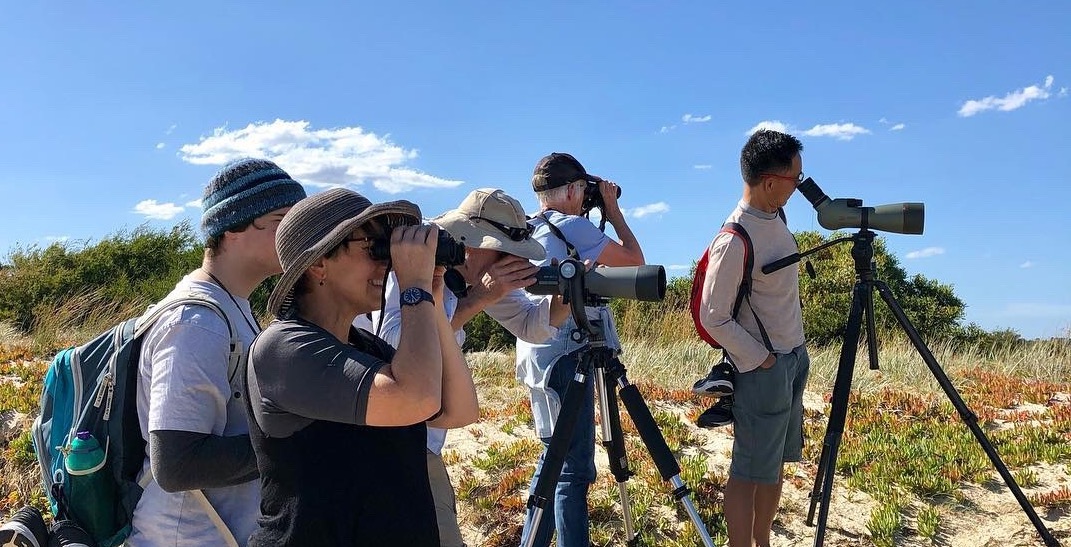 On a site visit with artists to shorebird habitat in Western Port Bay, Victoria with artists and members of the Victorian Wader Studies Group Roger Standen and Penny Johns. (photo © Kate Gorringe-Smith)

EAAFP: Where are the artists from who joined the project and how did you communicate with them?

Kate: I have run three major projects now with migratory shorebirds as the starting point: the Flyway Print Exchange, 20 artists in the Flyway Print Exchange were from New Zealand, Australia, Indonesia, India, Singapore, South Korea, China, Japan and the USA,  a one-off exhibition in Melbourne featuring work by migrant and refugee artists called From a Home to a Home: A Story of Migration; and the Overwintering Project: Mapping Sanctuary (since 2017). I have connected with artists by sending emails to international and Australian print workshops, by publicizing the project in art journals and through social media and using any art or birding network I could access.

The artists have been wholeheartedly enthusiastic and wonderful. Although we had very little funding, most of the art has been donated to support the cause. For the Flyway Print Exchange, I had to get the project description translated into Chinese and most of the artists I had never met but they willingly made editions of 30 prints to exhibit and sell to raise money for shorebird conservation. For the Overwintering Project, artists have run workshops and exhibitions to help make works for the project and to spread the word. It has been an amazing and humbling experience, and one I attribute greatly to the wonder that people feel when they discover migratory shorebirds, and then also discover that they have their own local  shorebird habitat! 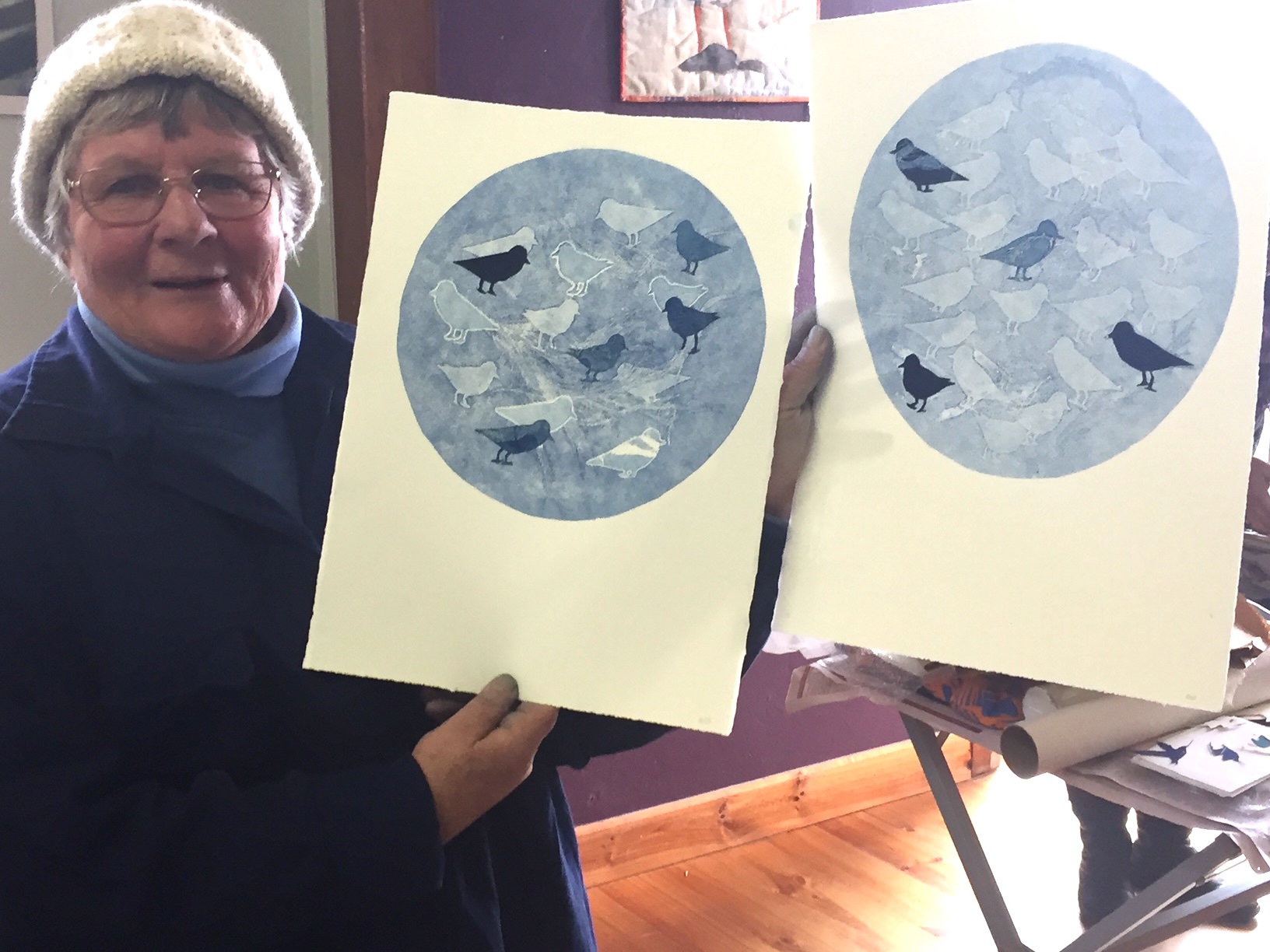 EAAFP: What was the most memorable experience during the project?

Kate: The most memorable experience was the way  people took the ideas behind my projects and ran with them, making the most beautiful artworks, exhibitions and connections. The generosity of the scientific community is not to be overlooked either – every step of the way I have had amazing support from dedicated volunteer and professional shorebird experts who are embracing art as a way to engage the broader community with scientific issues. They have generously spent hours in the field pointing out shorebirds to artists and gallery-goers, telling stories of shorebirds and their habitat. Some artists come back to make more art, and some have gone on to generate their own exhibitions and projects about shorebirds. 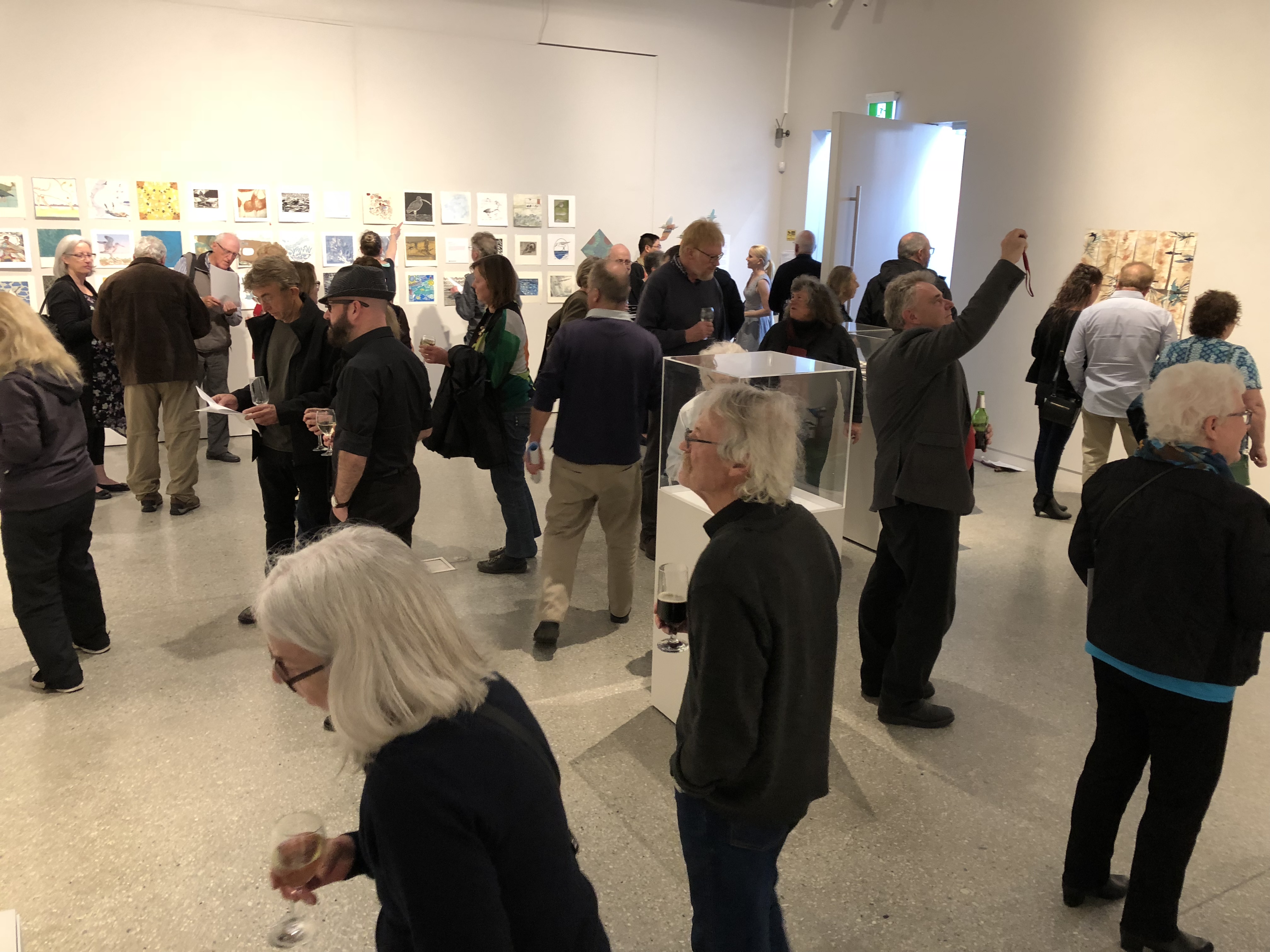 A shot from the opening of the Overwintering Project, Mapping Sanctuary at Moonah Art Gallery, Tasmania (photo © Kate Gorringe-Smith)

EAAFP: Where had exhibitions been held, and how do they influence local people?

Kate: My projects have been exhibited all over Australia as well as in New Zealand, Hong Kong, Indonesia and Singapore. The Flyway Print Exchangeis still going being exhibited, and the Overwintering Project is ongoing with more Australian exhibitions lined up.

It is hard to tell how local people are influenced as I have not done any formal feedback study, but there was a master’s study into whether being involved in an environmental art project had a long-term effect on the artist’s views and behavior relevant to the project. This study found that there was a long-term effect on both awareness and behavior. I have also had testaments from some of my artists that they are now ‘shorebird advocates’ for their family, friends and colleagues, and as I say some artists have gone on to plan further shorebird-related exhibitions and workshops so I do hope that the effect is not just fleeting.

EAAFP: What message do you want to deliver through art projects?

Kate: I hope to help scientists reach a new audience beyond the scientific and birding communities with information about migratory shorebirds, the Flyway, and their current plight. The ideal ripple effect would move from the artists to their circles of influence, also to gallery visitors and then their friends and families too. We are also running shorebird drawing competitions in primary schools and using the Miranda Shorebird Centre (New Zealand) initiated community art project ‘The Flock’ to engage children and families. Art is a great leveler and community builder as anyone can be involved in some way.

EAAFP: Do you have any other future plan or wish to use Art to raise awareness of migratory birds?

Kate: Always!! I feel I am on a bit of a mission now!! I have an idea for a project called Haventhat would engage one or more artists from each Flyway country with their local shorebird experts and shorebird habitat and bring the works together into an exhibition that could be exhibited along the Flyway. I have other ideas too – whether they come to light just depends on my time and energy! In the meantime, I will see where the Overwintering Project takes me. There is such richness and beauty in the idea of the Flyway, the complexity of wetland habitat, and the wonder of these birds that I can’t see myself running out of inspiration anytime soon.

To learn more about what Kate did, please visit her homepage: 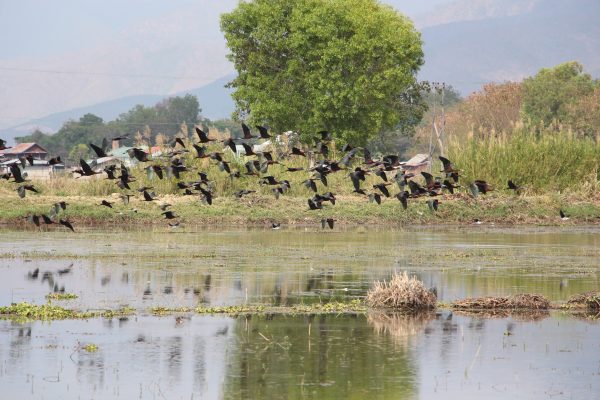