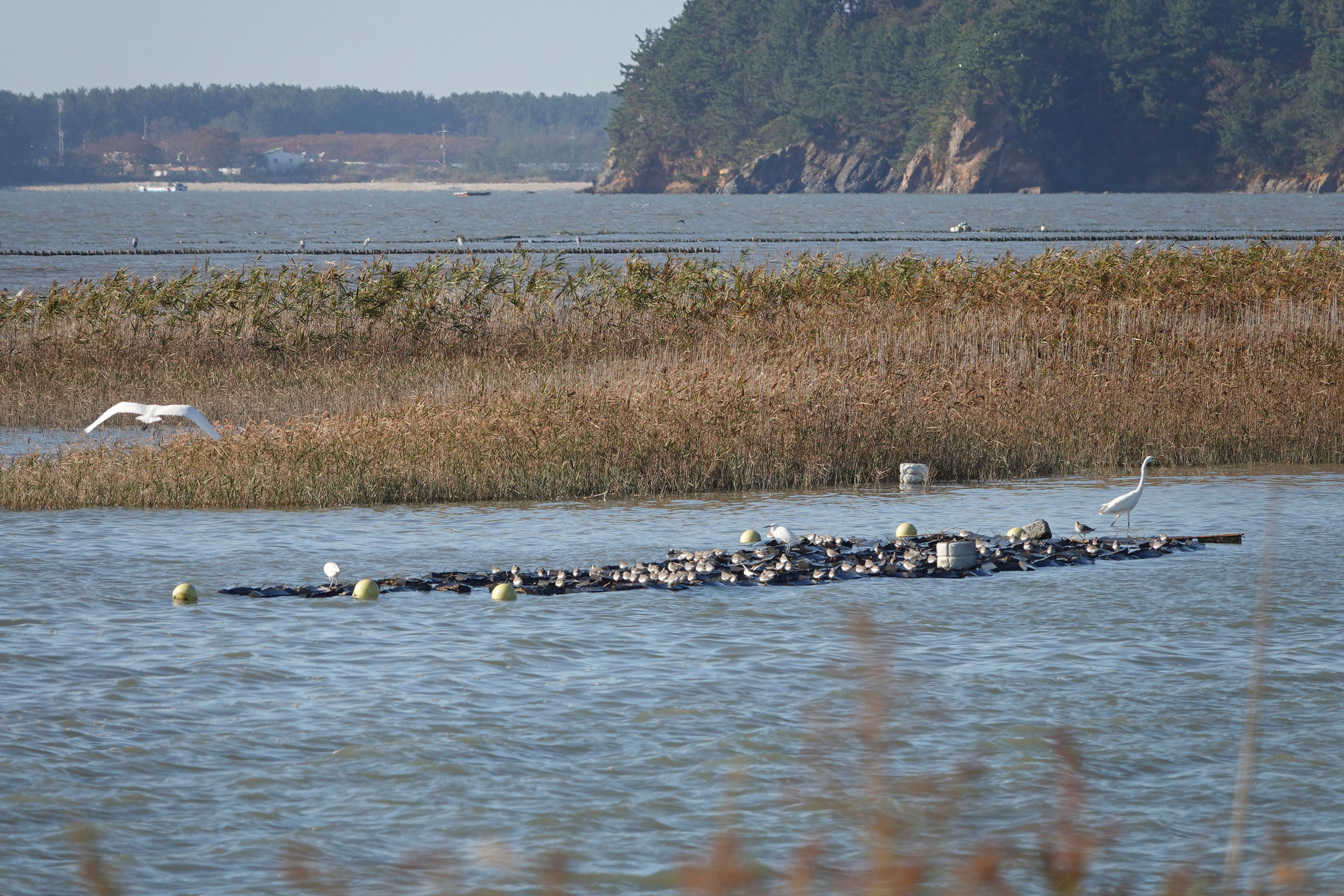 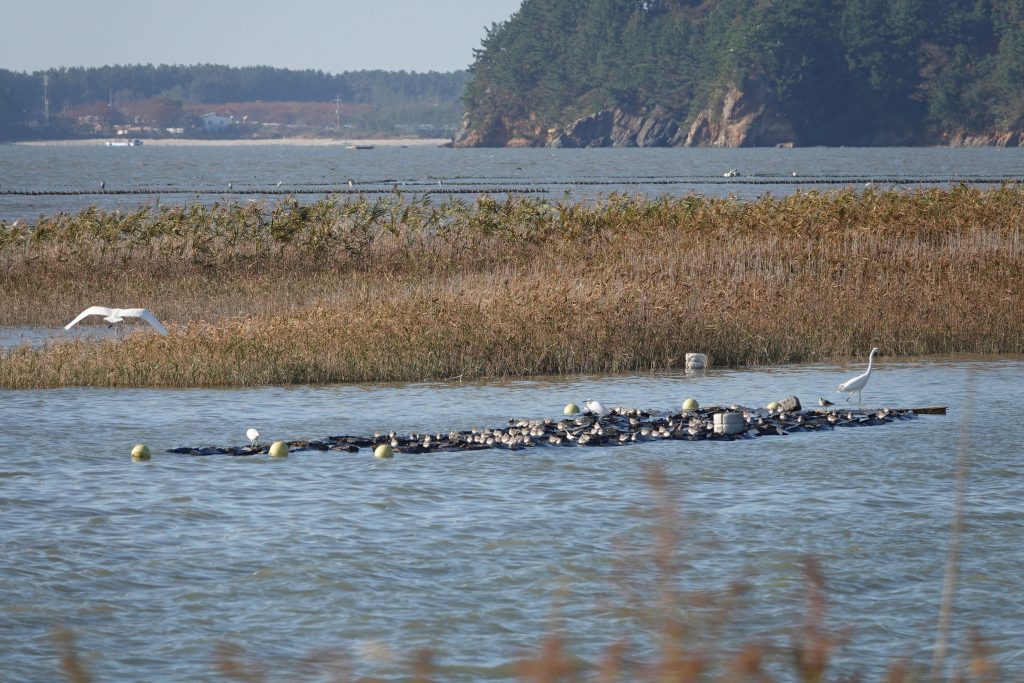 The Yellow Sea, encircled by the coasts of China and the Korean peninsula is very much synonymous with the conservation of migratory waterbirds in the Eastern Hemisphere. The region is not only recognized for the high diversity and abundance of shorebirds which depend on it but, unfortunately, wide-ranging and pervasive threats to their survival. As man-made developments eats away the remaining areas of tidal flats, shorebirds – including the globally threatened Far Eastern Curlew, Spotted Greenshank and Spoon-billed Sandpiper – are rapidly losing places where they can reliably rest and feed unperturbed, reducing the likelihood that they can complete their epic migrations.

The western coastline of Republic of Korea is one of the most important coast-scapes along the Yellow Sea where hundreds of thousands of shorebirds stage annually on their migrations. One significant site on the South Korean coast for shorebirds is the Geum estuary in South Chungcheong Province. At Geum, internationally important populations of over 20 waterbird species pass through, or use the site every year, including a high proportion of East Asia’s Eurasian Oystercatchers.

The Geum Estuary Project is a collaborative project led by the BirdLife International Secretariat and BirdLife Australia, in close collaboration with the Government of Seocheon County. Since 2014, the Project has sought to strengthen conservation work at Geum for migratory shorebirds and their habitats, including habitat restoration, systematic monitoring and supporting the World Heritage listing.

Field surveys of the environment at Geum identified a lack of high tide roosting areas (caused by extensive development, hydrological alteration and disturbance) as one of the main limiting factors likely to affect the fitness of the shorebird populations.  This work inspired the development of the Floating Roost Trial; a project which seeks to create adaptable, cost-effective and low impact roosts for coastlines where existing management techniques could not be employed. The concept was developed in Australia, and utilises infrastructure adapted from revolutionary oyster farming techniques invented in New South Wales. Floating long-line oyster bags are filled with oysters, arranged in lines and anchored to the tidal flat.

Traditional construction of shorebird roosts involves significant earthworks and so, whilst tried and tested, they come with significant costs and may have undesired effects on the surrounding environment. Floating roost sites, whether built using natural or artificial materials, may be supplementary as a roost option for shorebirds at high tide since they essentially rise and fall with the tides, and are resistant to vegetation colonization. In addition, floating roosts can be re-located if needed.

After trialing in Australia, BirdLife returned to the Geum Estuary during peak northwards migration in early May 2019. There, we deployed three roosts in the region; at Jangu Bay and Sol Ri. A small team toiled over 3 days to fill the oyster bags, attach them to the lines and tow them into position. These floating roosts are now being monitored by staff from the Seocheon Migratory Bird Centre using remote cameras.

A number of waterbird species immediately began to use the Korean roosts include Grey Heron, Great Egret and various shorebirds. On 8th May, around 28 shorebirds were photographed roosting on the bags at the tide’s peak but as the tide receded another 15 birds arrived.  Footage from the next day played out much the same. By 9th May, the floating roosts were almost fully occupied, with about 300 birds counted. Then, upon return from their breeding grounds, the team were able to observe the roosts at full capacity as over 500 exhausted birds were recorded on the .

To date 45 waterbird species, including 18 shorebirds have been observed using the floating roosts in Korean trials. The floating roosts have proved they can provide temporary respite for at least a small proportion of these birds at the crucial periods of the tidal cycle and may improve the likelihood those birds successfully complete their migrations and breed. It is also worth noting that behavioral observation study is important for this relates to energy consumption when using the roost. The project is investigating what variables dictate the use of the roost and how they may influence birds maintaining a positive energy balance at roost. These variables include wave action, thermoregulation and potential for opportunistic feeding.  Longterm adaptive studies will be critical to understand the contribution of these floating roosts to staging waterbirds within perturbed landscapes. Ultimately it is critical to state that these artificial roosts are no substitute natural habitats for waterbirds and efforts to manage and restore natural habitat should be prioritized. 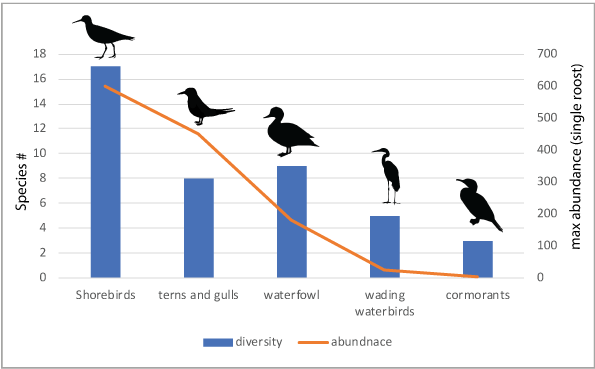 Fig. 1. Shorebird and waterbird use of artificial floating roosts by group 2018-2019 (While peak abundances have been observed at high tide, many species remain roosting on the floating roost throughout the tide cycle. There was no preference shown for position within the bag configuration.) 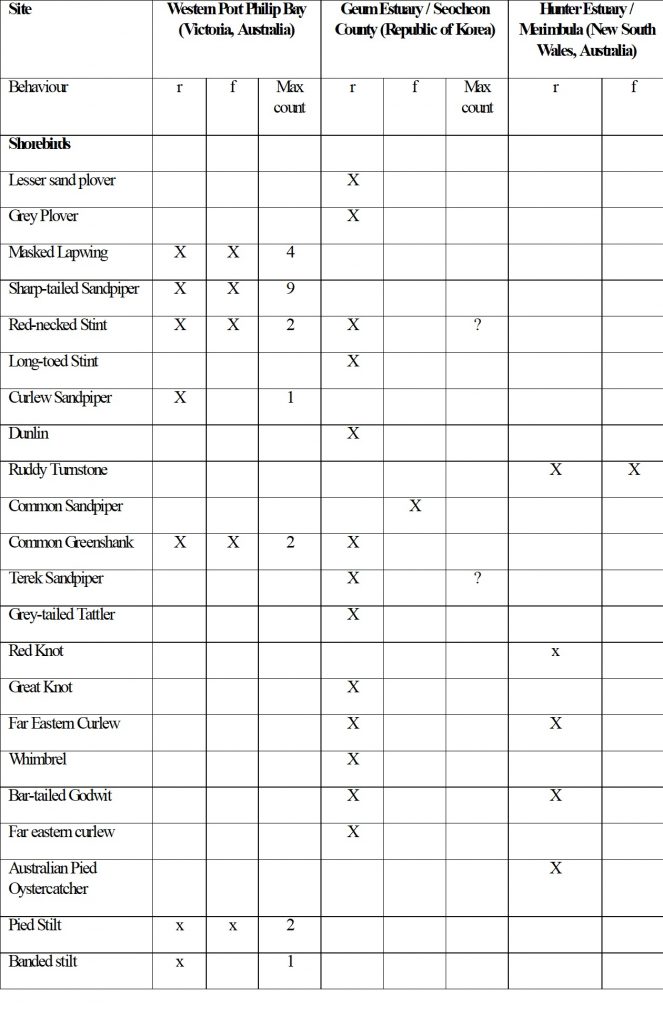 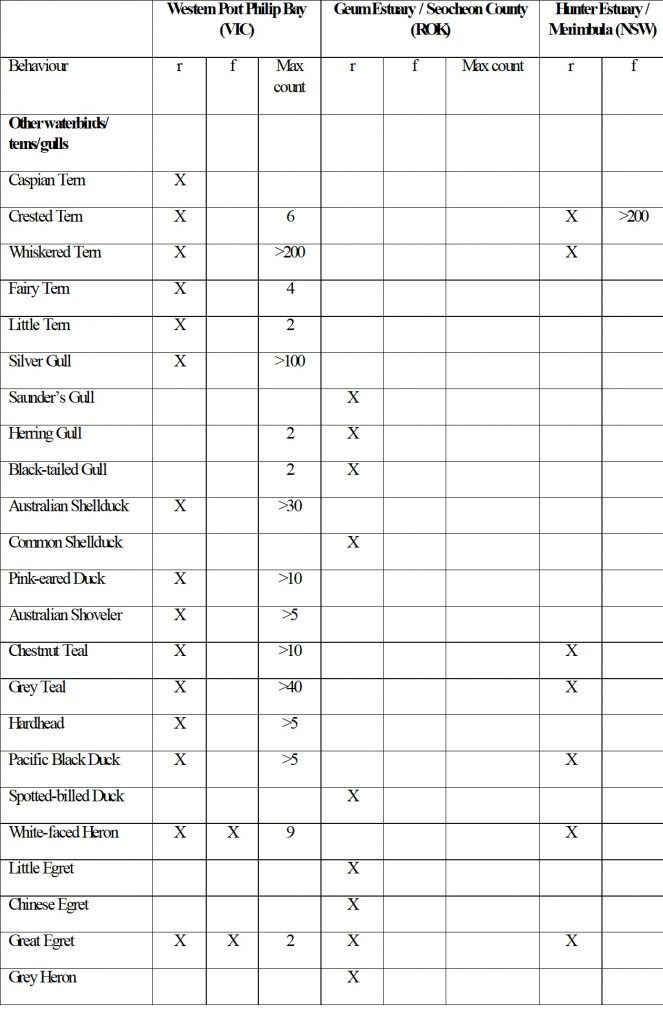