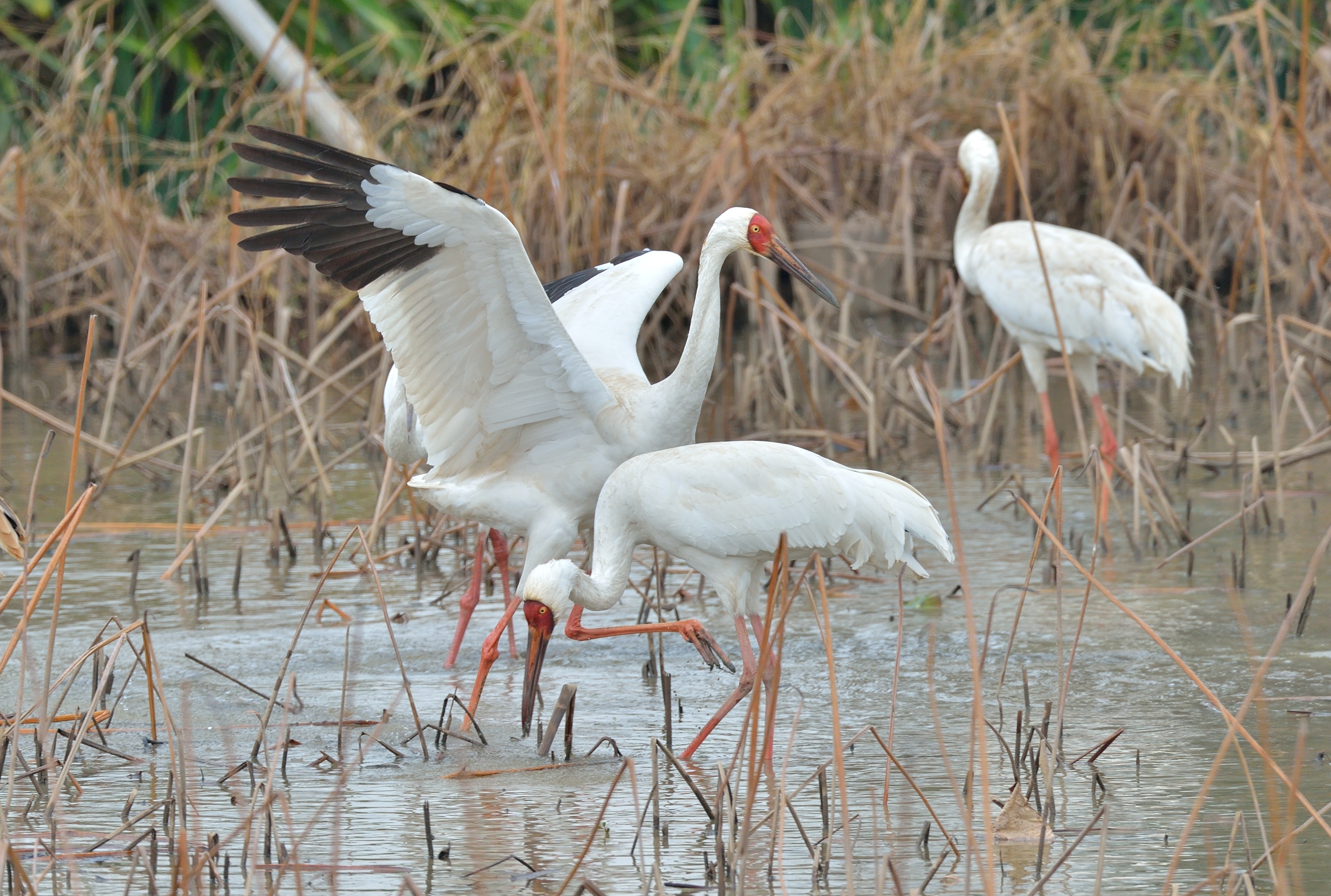 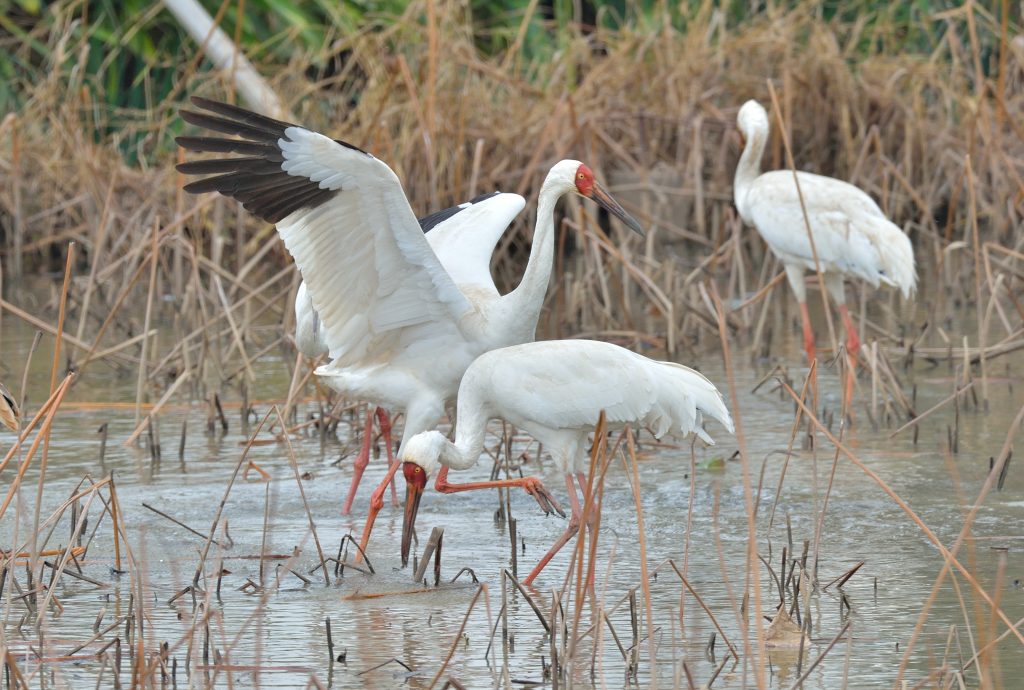 Siberian Crane is a Critically Endangered species that breeds in Arctic tundra of Yakutia and winters almost entirely at the Poyang Lake and nearby Yangtze basin wetlands in central China. Although single bird in 2002 and two birds in 2016 were found at the Inner Deep Bay wetlands of Hong Kong, and single birds were also recorded in Taiwan and Yunnan in recent years, the nine birds found at Jiangmen were the biggest wintering flock found outside the Yangtze basin, and the first record for Guangdong Province. 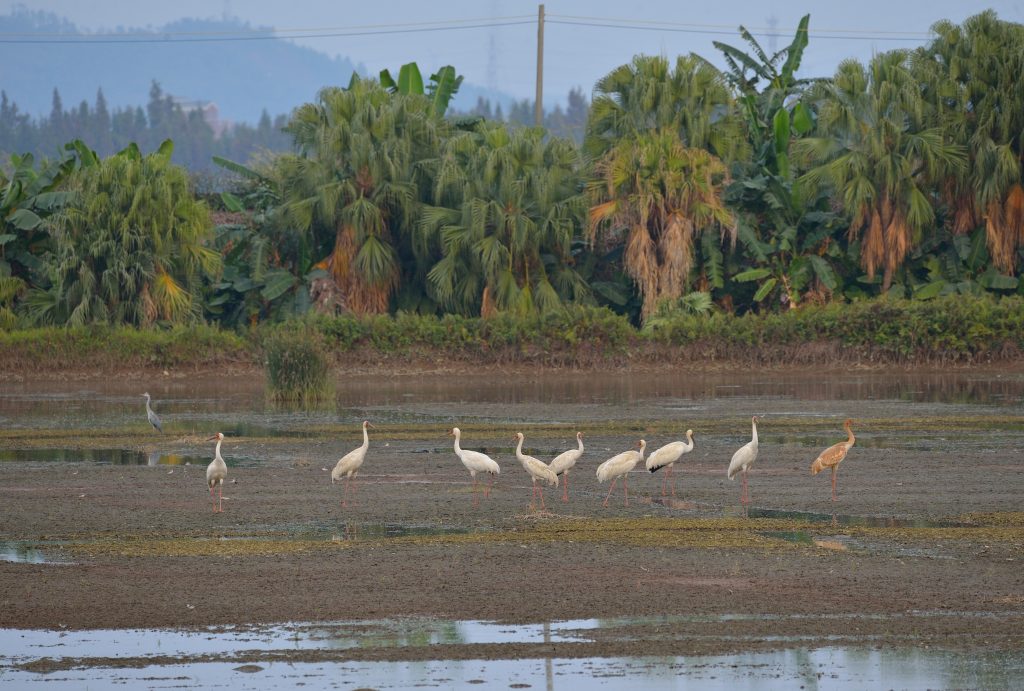 As Siberian Crane is a super star for birdwatching and photography, which is becoming popular in China, the appearance of the Siberian Cranes inevitably attracted visitors to the site. In order to prevent disturbance and damage to farmland facilities where the cranes stay, the local government announced a temporary entry restriction to the island from 21 December 2019 to 6 January 2020. On 6 January the restriction was extended to 20 March 2020.

The local government has also removed stray dogs on the island, postponing construction activities and ban fireworks during the spring festival to provide a suitable wintering site to the Siberian Cranes. The site is also guarded and patrolled daily. Illegal bird nets have been taken down and confiscated.

On the other hand, local conservationists took the chance and formed a volunteer group to patrol the area for preventing illegal activities, to record birds and monitor the site, asd well as to rasie public awareness on conservation. Leader of the team, Mr Lei Lei had been in contact with the National Bird Banding Center of China, the International Crane Foundation, the Hong Kong Bird Watching Society and the EAAFP Crane Working Group on matters related to biology of the Siberian Cranes and better management practice at the wintering site. Great care and protection effort have been shown to encourage the cranes to stay at Jiangmen. 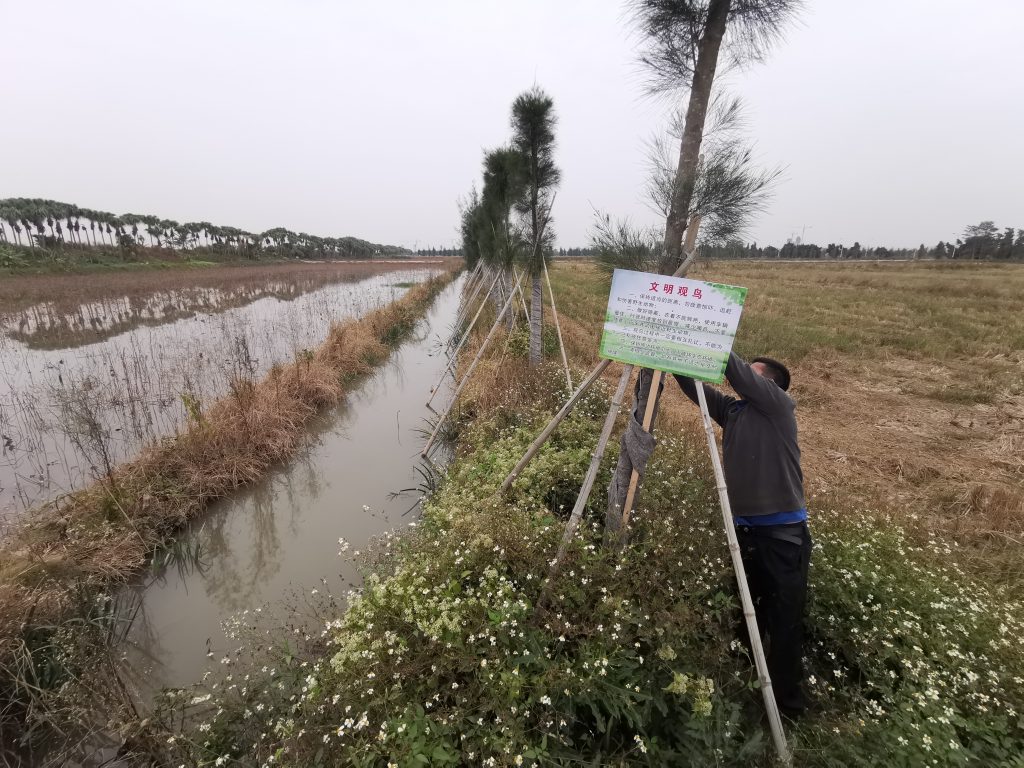 During their stay at Jiangmen the Siberian Cranes were observed to feed on rhizomes of lotus and other aquatic plants in the ponds. “In the wintering season of 2016 water level of Poyang Lake was too low that not enough eelweed (Vallisneria spiralis) tubers were available” said Dr Jiang Hongxing of the National Bird Banding Center of China, “Siberian Cranes were also observed to feed on young lotus rhizomes. This shows the flexibility of diet of Siberian Cranes.” The local tenant who cultivates organic rice kept an optimum level of water at the ponds to provide suitable feeding grounds to the cranes despite some economic drawbacks as local communities would like to keep the cranes.

The above measures had provided a safe haven to the cranes. As of 18 February 2020 all nine birds were still seen at Shazaichang. The flock has been staying at the site for more than two months.

2020 was designated as the Year of the Cranes at the International Workshop of Crane Conservation in East Asia convened in Beijing in October 2019. The nice surprise of Siberian Cranes in Jiangmen seemed to mark a good start of this year. It is hoped the birds will return to Jiangmen in late 2020.

*Notes: On 3 December 2019 a flock of six Siberian Cranes was seen flying over Shantou, eastern Guangdong. It is very likely to be the same birds. 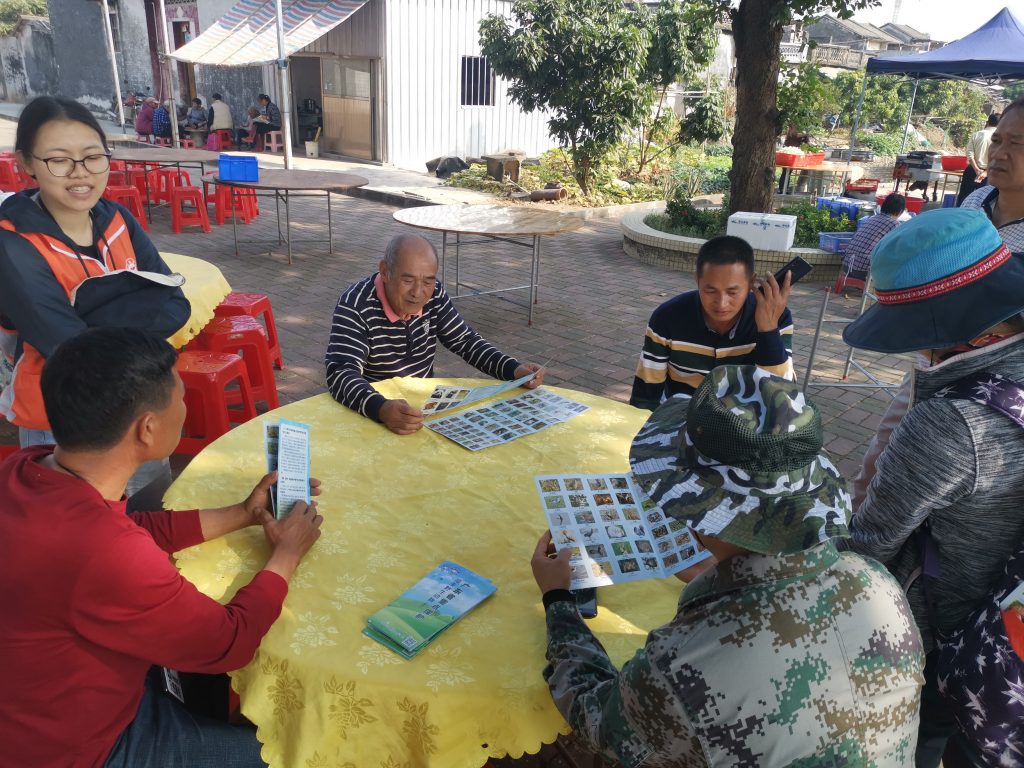 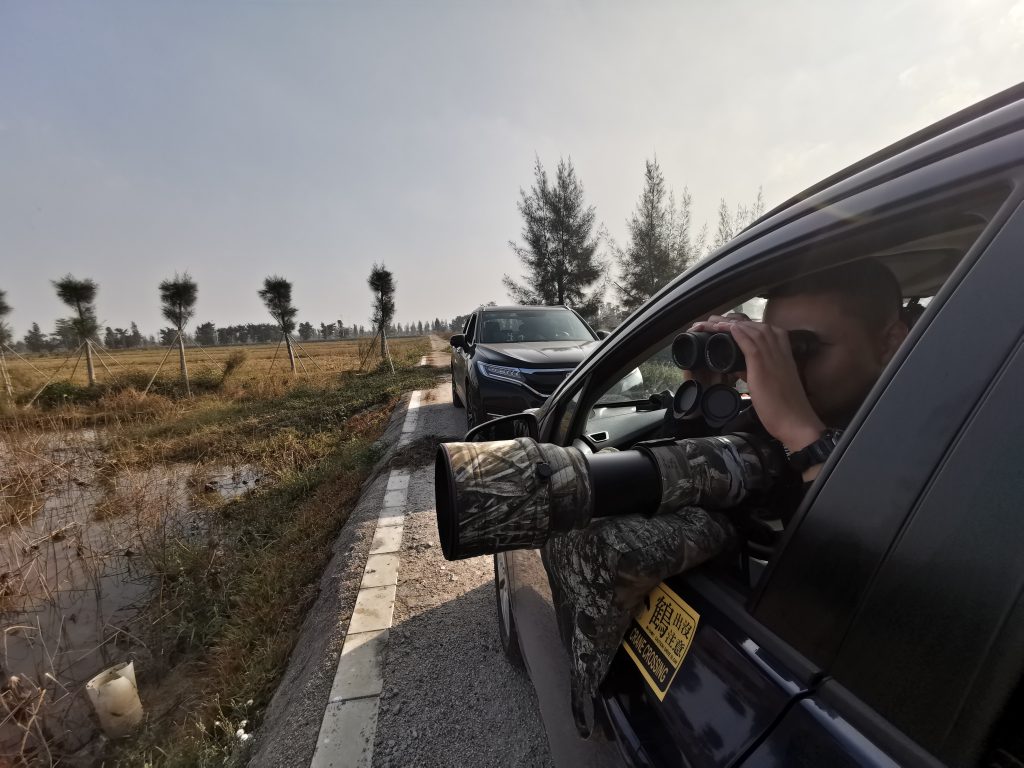 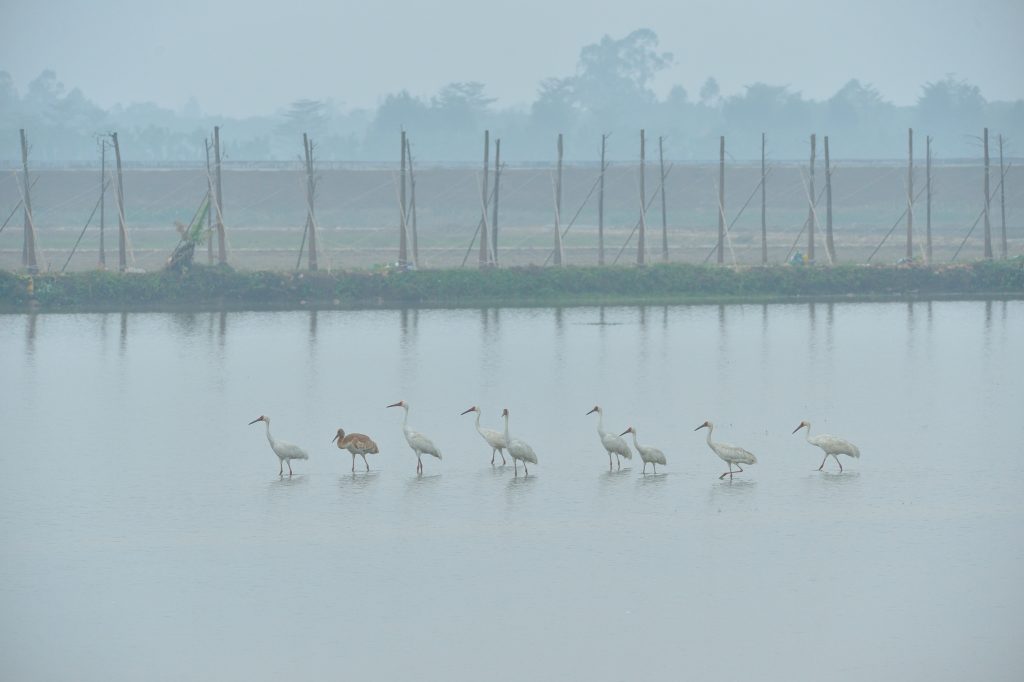