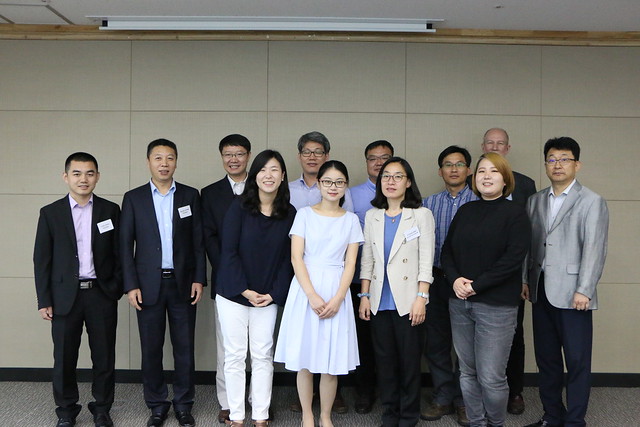 A group photo of participants of the First Meeting of YSLME Habitat WG. Photo by © Yinfeng GUO

The Phase II UNDP/GEF Yellow Sea Large Marine Ecosystem (YSLME) got up and running earlier this year, based in the same building as EAAFP in Songdo, Incheon. The project aims to promote adaptive ecosystem-based management in the Yellow Sea. A regional Working Group (WG) on Habitats has been set up to provide guidance and coordination for regional activities to improve the ecological carrying capacity with respect to supporting services by conserving biodiversity and maintaining current areas of habitats. This WG held its first meeting in Songdo on September 5-6th, 2017 with representatives from the First Institute of Oceanography of the State Oceanic Administration of China and experts from Korean institutes and NGOs.

Spike attended the meeting, which discussed the details of a workshop to develop a regional biodiversity conservation plan for the Yellow Sea. The workshop will take place on November 7-10th, 2017 in Rudong, southern Jiangsu province in China, a critical stopover site for Spoon-billed Sandpiper and other endangered species. The Habitat WG will focus on two outcomes i) maintenance of current habitats and monitoring and mitigation of the impacts of reclamation and ii) a strengthened Marine Protected Area network in the Yellow Sea, with improved ecological connectivity and management effectiveness. While YSLME considers all biodiversity, not just migratory birds, and does not include the Bohai Sea, there is clearly a great opportunity to links its activities with EAAFP’s initiatives through the EAAFP Yellow Sea Task Force and the follow-ups to IUCN resolutions 28 and 26 at recent World Conservation Congresses, including World Heritage nomination for Yellow Sea tidal flats.