The Latham’s Snipe project team is excited to have recaptured their first snipe at Port Fairy, a small seaside town in south-western Victoria, Australia. The bird, first captured on 1 October 2015, was re-captured on Sunday morning 9 October 2016 only a few hundred metres from its original capture site over 12 months previously! The geolocator appeared in good condition and the bird was in good health.

We obtained a full migration track for the snipe (see below). T0, also fondly known as ‘Richine’, left Port Fairy in February 2016 and spent about 2 months in south-east Queensland before flying to Cape York (or somewhere in the region) in April. From there the bird flew direct to Hokkaido and arrived around early May. The bird spent May-August somewhere in southern Hokkaido. In late August it flew direct from Hokkaido back to SE Queensland in 3 days, where it spent about a month presumably staging before returning to Port Fairy on 26 September. 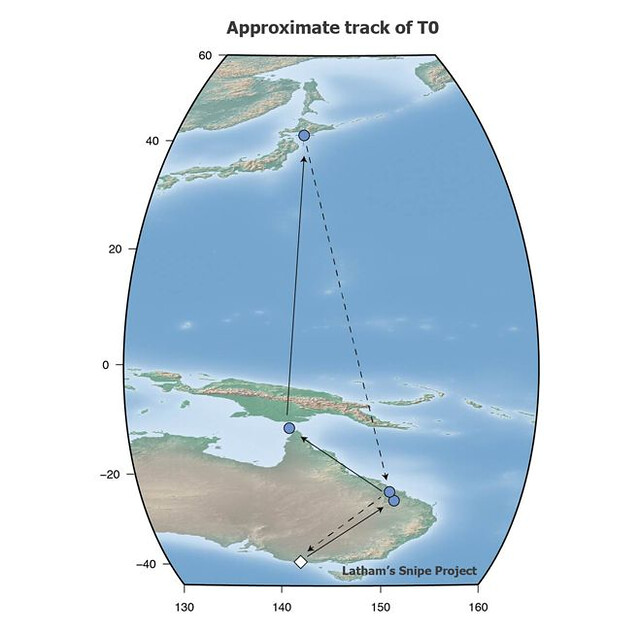 This is the first time a migration track has been obtained in this manner from Latham’s Snipe. We are thrilled at re-encountering one of our birds as it confirms what we had suspected, that some snipe return to Port Fairy each year. We are therefore hopeful we may recapture another of our birds (14 geolocators in total were deployed on birds captured in Port Fairy over the 2015-2016 non-breeding season).

I’d like to thank the extremely hard work and dedication of my team in Port Fairy and our helpers on catches over the last 13 months, which has made it possible to do this project. And thanks to the Victorian Wader Study Group (VWSG) for supporting the project and the Australia Japan Foundation for funding to cover geolocators and our visit to Japan in July to work with the Wild Bird Society of Japan.

We will be again deploying and hoping to retrieve geolocators this non-breeding season, as well as deploying some radio transmitters. If you would like to find out more information about the project, or get involved as a student or volunteer, please contact Birgita b.hansen@federation.edu.au.