On 27 and 28 February 2016, two events were held in New Zealand to farewell the Godwits as they prepare to leave for their migration to the Yellow Sea. 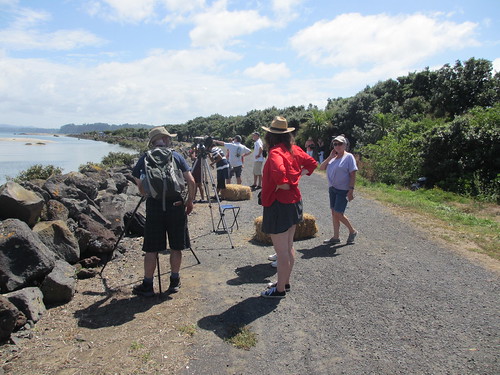 Participants are watching godwits. The bales of hay are for children to climb on to see through the telescopes. This saves the trouble of putting them up and down for adults and children © Pukorokoro Miranda Naturalists’ Trust

On 27 February an event was held at Ambury Park just to the south of Auckland City where there is a major roost site close to the urban population. Members of the Ornithological Society of New Zealand and the Pukorokoro Miranda Naturalists’ Trust assisted staff from the Auckland Council to host the event. Approximately 120 people mainly from the local area visited the site and were shown displays and observed the birds on their high tide roost. The Godwits had started to assume their breeding plumage and attracted much interest, particularly when viewed through the assembled telescopes.

On 28 February an open day was held at the Shorebird Centre run by the Pukorokoro Miranda Naturalists’ Trust on the Firth of Thames [EAAF019]. The 80 visitors were treated to a summary of the activities that the Trust will be involved in the coming year including the survey of the coast line of DPR Korea as well as visits by high ranking Chinese Officials. 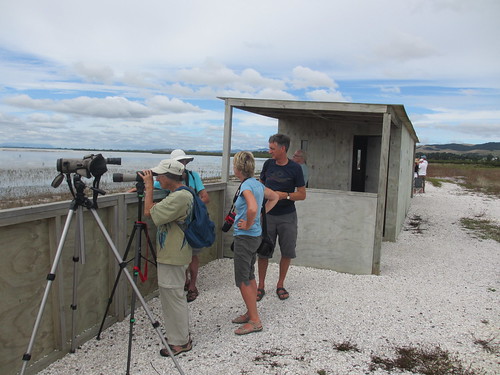 Following the talks the visitors then went to the Shorebird hides where several thousand Godwit and Red Knot were assembled for viewing.

There were also a number of other farewell to the Godwits events held in other parts of New Zealand including the Foxton Estuary near Wellington and the Avon Heathcote Estuary near Christchurch.

The first records of Godwit migration were received on 5 March when there were a number of departures from the Kaipara Harbour. Birds also were observed leaving from the hides at Miranda on 6 March.

New Zealand has now passed over the care of Godwits to our friends in China and Korea to fatten them up before they get sent on their way to Alaska.