Far Eastern Curlew is the largest shorebird in the world. It is an endemic shorebird in East Asian-Australasian Flyway. The global trend of the Far Eastern Curlew population has been declining, thus in 2016 the status of this species was determined as Endangered species in the IUCN Red List. The main threat for this species is habitat loss especially in stop-over and non-breeding grounds, due to reclamation, port development, industrial use, agriculture, and urbanization. Other threats along their migration route include hunting, bycatch in fishing nets, pollution, and human disturbance.

Sumatra is one of three biggest islands in Indonesia and located in west area of the country. It’s near Singapore and Malaysia peninsula. With its long shoreline, coastal areas in Sumatra is potentially important to migratory waterbirds. Based on the result of the migratory bird survey in 2019, there are three potentially important sites for Far Eastern Curlew: Sembilang National Park (FNS EAAF 108) in South Sumatra Province, Pantai Cemara in Jambi Province and Bagan Serdang in North Sumatra Province.

The monitoring activity of Far Eastern Curlew at Berbak-Sembilang National Park, STPN II areas – Palembang, was held for five days, from December 4th to 8th 2020, by the EKSAI Foundation team together with Deni Mulyana (the National Park Ranger), and the local people: Mr. Taher and Mr. Yoko were able to join us on the last day. During the monitoring activity, we recorded 13 species of migratory shorebirds with a maximum total count: 27.059 individuals and a maximum count of Far Eastern Curlew species: 210 individuals.

The monitoring activity at Pantai Cemara, Tanjung Jabung Timur – Jambi Province, was also held for five days from November 17th to 21st 2020 by the EKSAI Foundation Team and Ahmad Zulfikar Abdullah, together with the local team: Teguh (The Agency of Conservation and Natural Resources of Jambi Province), and local youth: Herman, Joni, and Wahidin, who already join us for our migratory shorebird survey at Pantai Cemara on 2019. During the monitoring at Pantai Cemara, we recorded 29 species of migratory shorebirds including 2 other endangered migratory shorebird species: Spotted Greenshank and Great Knot; with a maximum total count: 2.817; and maximum count of Far Eastern Curlew species are 32 individuals.

While for the monitoring activity in North Sumatra: Bagan Serdang – Deli Serdang and Pantai Titik Kembar – Batubara; by EKSAI Foundation survey team, together with Hasri Abdillah (the local bird researcher from Medan City, North Sumatra) were held for four days from November 30th to December 3rd, 2020. During the monitoring activities we recorded 23 species of migratory shorebirds including one other endangered species: Spotted Greenshank; with a maximum total count of migratory shorebirds: 2.622 individuals; and a maximum count of Far Eastern Curlew species: 26 individuals. 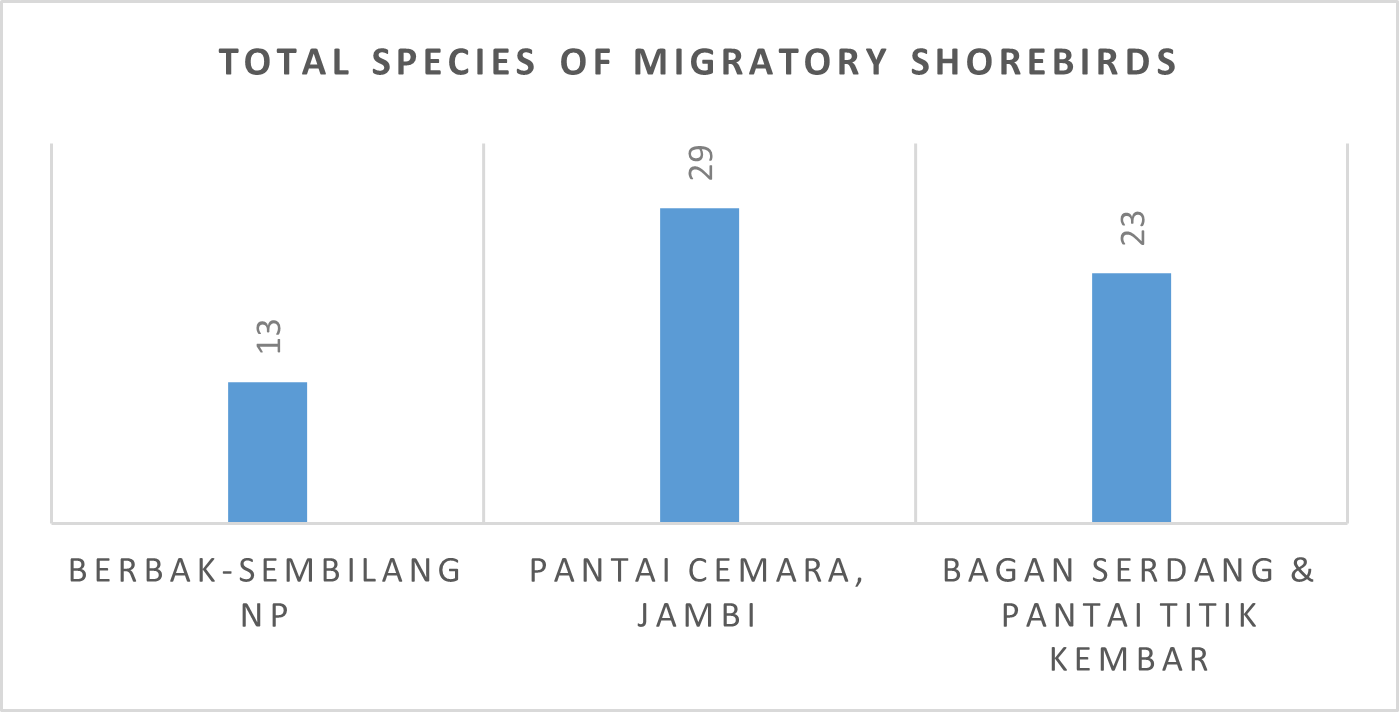 Fig. 2 (i) The comparation of migratory shorebird total species recorded on each site. 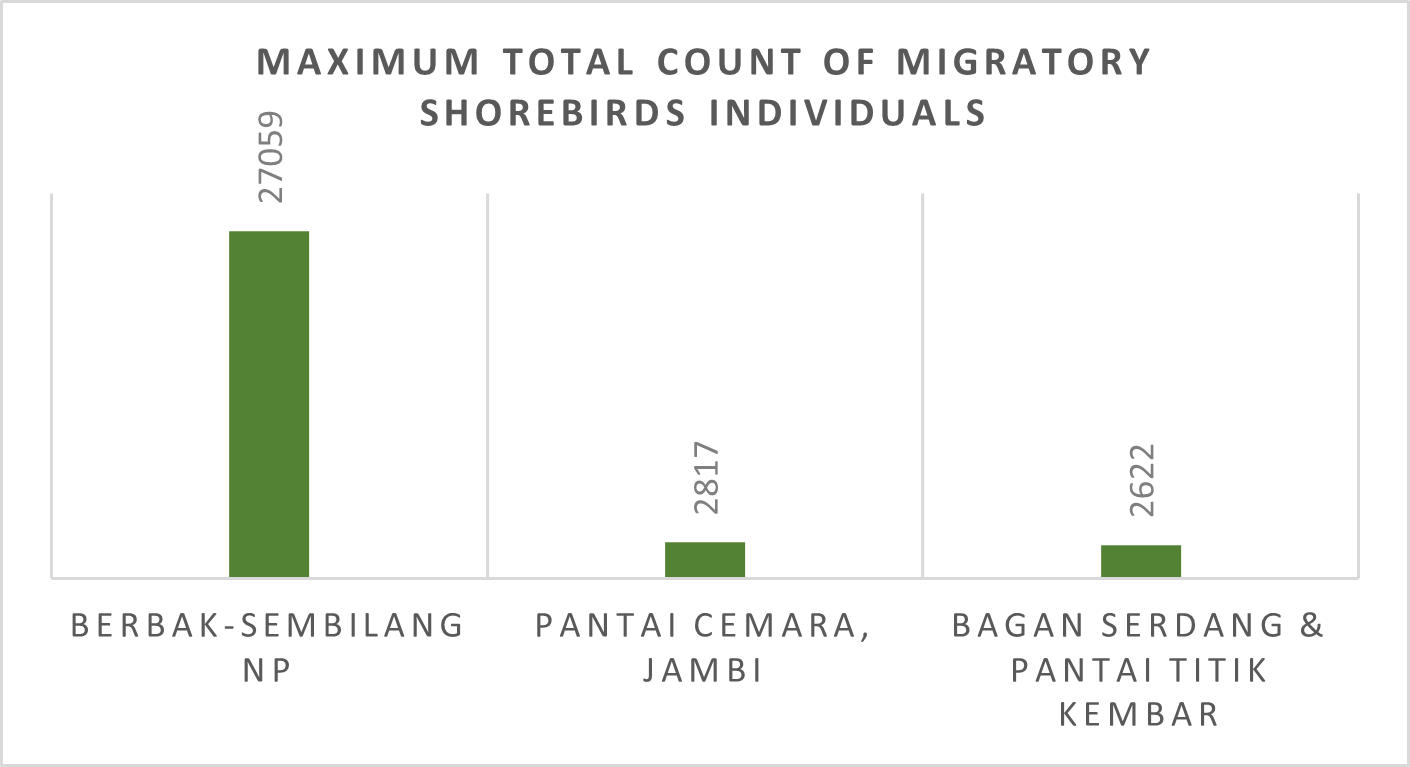 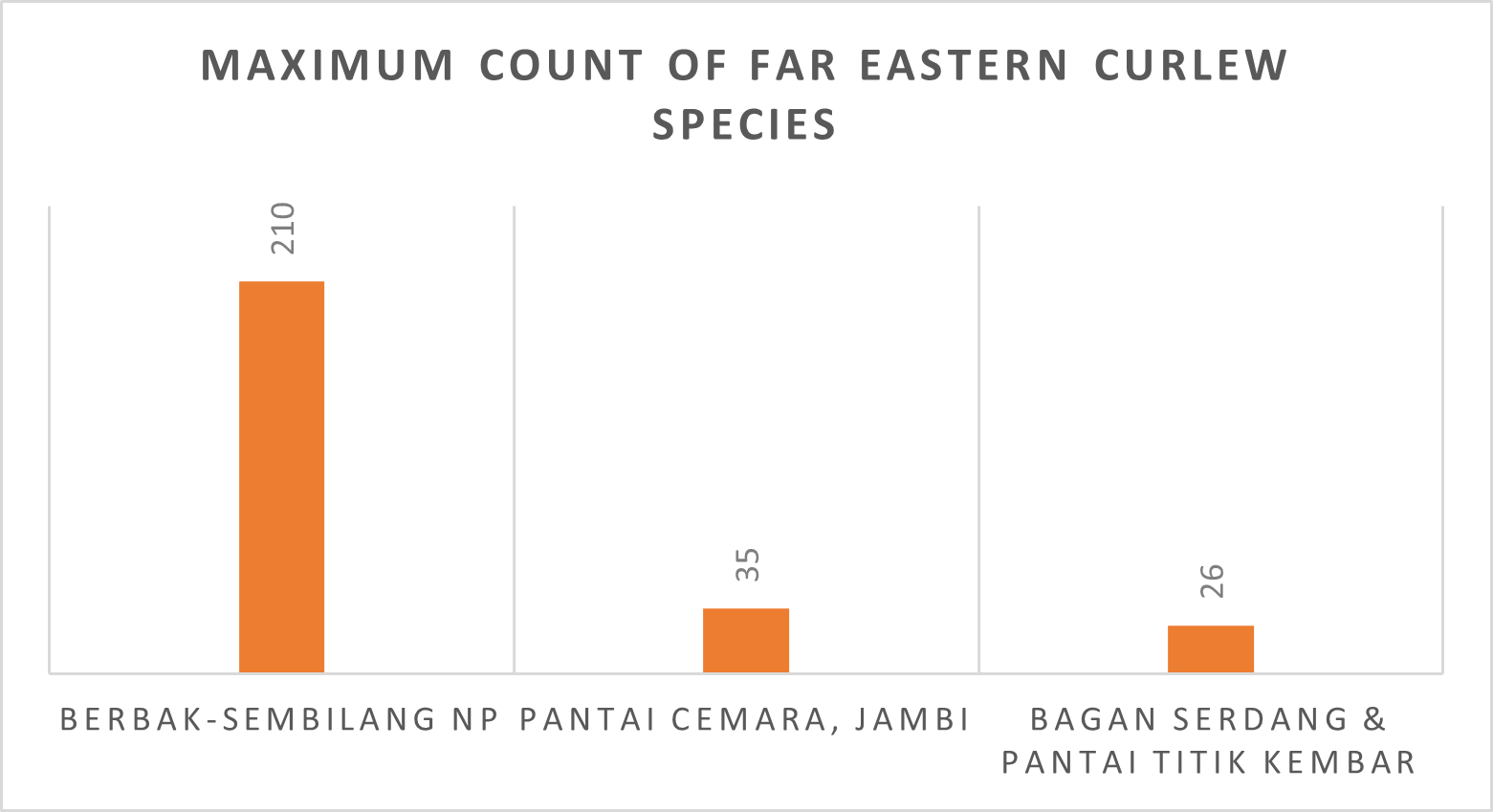 Fig. 3. The number of Far Eastern Curlew maximum count on each site.

In addition, the project team provided training to improve the capacity and skills of local supporting team (local ranger, local youth, local people, and local researcher) on shorebirds conservation and identification, especially on Far Eastern Curlew identification during the monitoring activity, especially the local youth team. They also educated local teams about the migratory waterbirds conservation and its importance.

During the activities, the project team received a lot of support from the local stakeholders such as the chief of Berbak-Sembilang National Park, the acting reagent and local government of Tanjung Jabung Timur-Jambi Province; the Forestry Department, and the Agency of Conservation and Natural Resources of Jambi Province; the Locals: Youth, ; also our fellow bird watchers, bird researchers, and bird conservationists. Despite their lack of knowledge and resources, they are excited to learn, help and support the migratory shorebird conservation effort especially the endangered Far Eastern Curlew species. A sincere gratitude to the government of Hwaseong City and EAAFP for the valuable support of funds and resources to initiate Far Eastern Curlew conservation in Sumatra Island, Indonesia.