By Yoonseon Namgung of Naeil News
Translated by EAAFP Secretariat 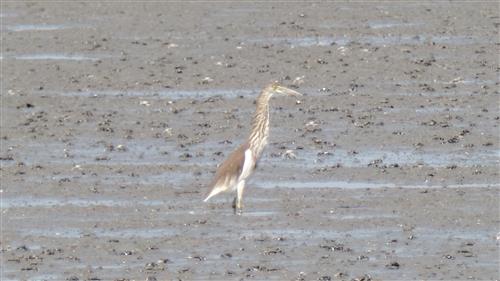 President Sangsub Kim of Korean Association for Bird Protection’s Asan Office has spotted 7 Eurasian Spoonbills, a Black-winged Stilt and a Chinese Pond Heron while monitoring at Geolmaeri Mudflat in Asan, the Republic of Korea.

It is a rare occasion to see Black-faced Spoonbill and Eurasian Spoonbill inhabiting the same area together, since Black-faced Spoonbill is supposed to be migrating by this time. Also, Black-winged Stilt is usually seen near Cheonsu Bay [EAAF046] in the same province, Chungcheong-do, and it has been a decade since it was last seen in Asan city. Chinese Pond Heron is first to be seen in Chungcheon-do for the record.

The Korean Association for Bird Protection explained, “Various species of birds visited Geolmaeri Mudflat where pressure for development has been consistent. This phenomenon is an indicator that the environment of not only Geolmaeri Mudflat but also Asan city has been improved, and also means that the ecological change caused by climate change has begun”.