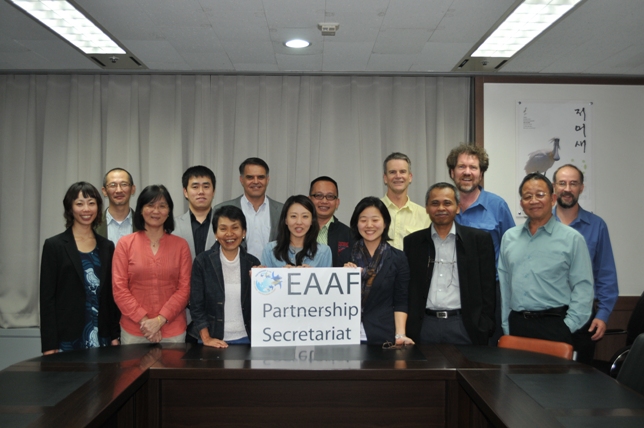 The Implementation Strategy of the EAAFP was adapted at the First Meeting of Partners (MoP1) in November 2006 and refers to the period 2007-2011. The Implementation Strategy is the Partnership’s most important guiding document and has influence across all of its activity. A Task Force on the Review of Implementation Strategy was established to undertake review and update of the EAAFP Implementation Strategy. As agreed at the Fifth Meeting of Partners (MoP5), the Secretariat in consultation with the Task Force appointed a consultant, Crawford Prentice from Nature Management Services, to prepare report and facilitate the workshop. Subsequently, the workshop was convened, chaired by Douglas Hykle of CMS, at EAAFP Secretariat on 14-15 October attended by Ramsar, Japan, Australia, Singapore, Thailand, Philippines, Indonesia, Wetlands International, and BirdLife International. On the first day of the workshop, the task force reviewed the key issues identified by the consultant in relation to the 14 outcomes of the current implementation Strategy. The substantive points identified during these discussions will be incorporated into the synthesis section of the consultant’s report in due course, for the consideration of the Partners. On the second day, possible new subject areas, e.g. climate change adaptation and mitigation, the possible inclusion of indicators and a detailed review of the existing outcomes and guidance points, a feedback on CEPA outcomes from the EAAFP CEPA Task Force meeting in September 2011, as well as the structure and content of the current Implementation Strategy were discussed. The final version of the implementation review and a draft of the revised Strategy 2012-2016 should be available for inclusion in the Agenda Documents of MoP6 in March 2012