EAAFP Side Event and Participation at CBD COP11, Hyderabad, India 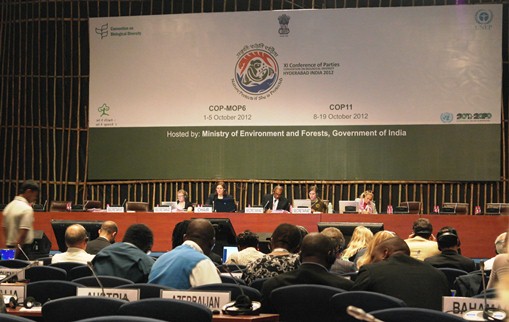 The Secretariat of the EAAFP participated in the Eleventh Meeting of the Conference of the Parties to the Convention on Biological Diversity (COP 11) held in Hyderabad, India, from the 8th to the 19th of October 2012, to raise awareness of the importance of critical habitats for migratory waterbirds along the flyway and the role of the EAAFP in the conservation of threatened intertidal flats.

The EAAFP Secretariat hosted a successful side-event on the 10th of October to highlight the ecological crisis facing intertidal habitats along the East Asian – Australasian Flyway, including the threat of continuing loss of habitat to the migration and populations of many bird species. The title of this side-event was East Asian Coastal Wetlands in Ecological Crisis. The meeting was chaired by Olivier Biber, the International Biodiversity Policy Advisor of the Government of Switzerland. Following introductions, EAAFP Communication Officer Yuna Choi introduced EAAFP and its links to CBD Aichi Biodiversity Targets. Jane Smart, Director of IUCN Global Species Programme, made a presentation on the Situation Analysis of East Asian Tidal Flats, Nick Davidson of Ramsar secretariat, highlighted the value of wetlands and Nicola Crockford of BirdLife International, spoke about the implementation of IUCN Resolution 32, Conservation of the East Asian- Australasian Flyway and its threatened waterbirds, with particular reference to the Yellow Sea. About 40 people attended the meeting, including officials from countries of the EAA Flyway regions, notably China, DPRK, Indonesia, Japan, Mongolia, Republic of Korea, Thailand and Vietnam. 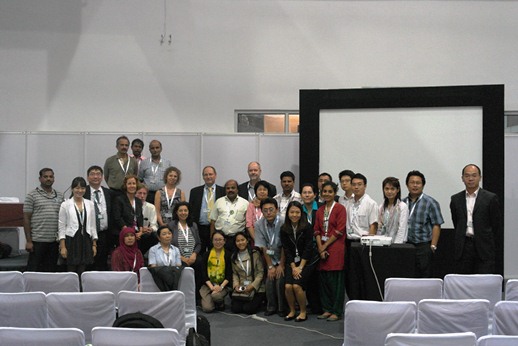 The Secretariat also participated in the side-event on the 11th of October that was organized by the Fundación Ambiente y Recursos Naturales (FARN), an Argentine NGO that specializes in policy and legal issues as regards to the environment. FARN is a member of IUCN and works closely with Wetlands International Latin America. Communication Officer Yuna Choi gave a presentation highlighting EAAFP Secretariat and its perspective on the topics discussed, and what EAAFP is doing in this regard. With the experience of EAAFP with wetlands, she reflected on the issue of conflict resolution in wetland management along the East Asian flyway and the importance of international cooperation to conserve healthy inter-tidal wetland ecosystems.

The EAAFP Secretariat also set up an exhibition booth for the Interactive Fair for Biodiversity, taking place in Hall-2 at HITEX Exhibition Centre, displaying EAAFP publications and promotion materials..

In terms of the conclusion of the CBD COP11 related to the strategic works of EAAFP, the governments of the world have agreed to increase funding gradually in support of actions to halt the rate of the loss of biodiversity. The CBD COP also supports the National Biodiversity Strategy and Action Plans (NBSAPs), Strategic Environmental Assessments, the designation of Ecologically and Biologically Significant Areas (EBSAs), and several other tools.