On 18 January 2022, the EAAFP Secretariat Programme Team’s capacity-building workshop was held at Gangwha island, Incheon, Republic of Korea. Located at the Northern-West Part of the Korean Peninsula, Gangwha island possesses important habitats for migratory waterbirds such as Black-face Spoonbills, Red-crowned Cranes, etc. Its main objectives were to share a comprehensive overview of previous activities in which the Programme Team members were engaged last year and to enhance the individuals’ capacity regarding tidal flats as well as key migratory waterbird species. It is hoped to encourage the members to be actively involved in future events of EAAFP and the Secretariat. Ms. Hyeseon Do (Programme Officer), Ms. Yeonah Ku (Local Project Coordinator), Ms. Yoojung Kwon (Programme Assistant). Ms. Hyoeun Kim (Programme Assistant) and Mr. Yong June Kim (Programme Assistant) were the participants of this off-site event. 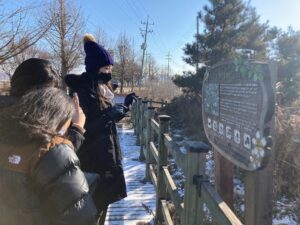 Initially, the Programme Team visited Ganghwa Maehwamareum Habitat (Check more details here), which is known as the first Korean paddy field Ramsar Site recognized by the Ramsar Convention in 2008. This site is named after an endangered aquatic plant “Maehwamareum”, which is only observed in Gwanghwa island and a few areas of the West coast on the Korean Peninsula. As other numerous endangered species such as Black-faced Spoonbill, Chinese Egret, and Seoul Pond Frog inhabit this site, Gangwha Maehwamareum itself possesses a significant value in terms of biodiversity. With additional related information provided by Ms. Hyeseon Do, the members had a great chance to understand the importance of the government and civil organizations’ constant awareness towards environmental preservation to encourage the public’s interest in such fields. The Programme team also had time to get to know better about each other during the afternoon. Each exchanged their feelings based on past activities in which they participated in 2021. Based on such conversation, the team members each had time to design a simple visualized mind map to have concrete strategic goals for this year, not only for the EAAFP Secretariat but also for themselves. 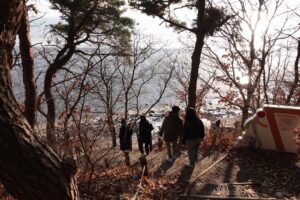 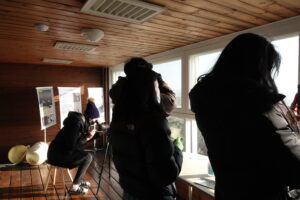 The next direction was Ganghwa Tidal Flat Center, located in Hwado-myeon, giant Black-faced Spoonbill-shaped models right in front of the center captivated the members’ eyes before entering the center. The center included a lot of informative displays regarding Ganghwa tidal flats’ backgrounds in RO Korea. Especially, the tidal flat’s various functions such as a natural reserve for biodiversity, filtering pollutants and aesthetics were well illustrated on the displays. Furthermore, as the models outside the center implied, the ecology of the Black-faced Spoonbill and other endangered bird species such as the Red-crowned Crane were emphasized. The members were overall impressed by the ecological importance of Ganghwa tidal flats regarding migratory birds through watching short clips of documentary materials.

On the way to dinner to conclude the team-building workshop, the members observed a school of Swan Geese sitting on dry fields. Though it was a short period, each member could enjoy the Swan Geese making small, joyful movements with each other. While having dinner together, the Programme team members shared their feelings about the day’s event. Everyone agreed on the fact that it is much better to have an effective understanding of environmental efforts promoted by local communities, non-governmental and governmental organizations for wetlands and migratory waterbirds through visiting sites in person. In addition, Ms. Yoojung Kwon’s internship has finally come to an end after 1 year (Check more details here), every member congratulated her on successfully completing the internship at the Secretariat. Migratory birds above the night sky cried as if they wanted to say her warm-hearted farewells.