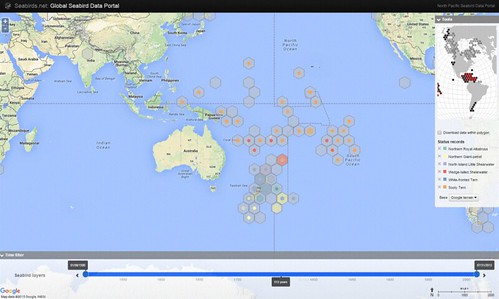 During the 2nd World Seabird Conference in Cape Town, South Africa (26-30 October 2015), EAAFP SWG will be presenting “Coordinating seabird conservation along the East Asian-Australasian Flyway (EAAF)” as part of the Marine Protected Areas and Conservation Policy session. Additionally, Robb Kaler (SWG Chair) will be presenting on seabird colony and seabird monitoring databases, highlighting some of the seabird information from the EAAFP.

Mark Carey will attend the 9th Australasian Ornithological Conference (Adelaide, Australia) to promote the activities of the Partnership and the SWG. He will participate in discussions with BirdLife Australia’s Australasian Seabird Group.

Initial steps are underway for an EAAF seabird horizon scanning project aimed at providing a comprehensive assessment of current and possible threats to seabirds in the EAAF. A multidisciplinary team with experience in research, policy, and land management from across the EAAF will be assembled for the exercise. Products from this comprehensive effort will help inform researchers and policy makers from the EAAF of imminent and future threats to seabirds. The goal is to complete the EAAF seabird horizon scanning project by January 2017 and presented to MOP9.

After two successful breeding seasons with using social attraction method and habitat restoration on a breeding island of Chinese and Greater Crested Terns, Simba Chan of BirdLife International worked with Chinese seabird researchers, nature reserve staffs and international experts again in the summer of 2015. The work conducted further confirmed that the tern breeding colony could be well protected and enhanced using appropriate methods and collaborative efforts from conservation partners. At least 52 Critically Endangered Chinese Crested Terns arrived and stayed on one island, the highest number of this species since the re-discovery in 2000. In addition, 2015 is the first time that this tern bred successfully on three islands along the east China coast. There were also about 350 fledged Greater Crested Terns counted toward the end of the breeding season. Researchers also conducted colour-ringing of the tern chicks and a total of 31 Greater Crested Terns were fitted with both a metal ring (on left tarsus) and a red colour ring (with codes in white colour, on right tarsus). Researchers hope to reveal migratory route of these crested terns that is an important information for the tern conservation in the EAAF region. We urge all conservationists, researchers, site managers and birdwatchers to report to EAAFP secretariat for re-sighting of any marked terns observed.

– A Big Comeback for Chinese Crested Terns in the Jiushan Islands, China