Participants of EAAFP Side Meeting at Ramsar COP11 © EAAFP 2012

The EAAFP meeting was held to introduce the EAAFP activities to Ramsar delegates from the EAAF regions, and to identify enhanced opportunities for cooperation with Ramsar. Eighty participants attended the meeting. It was chaired by Srey Sunleang of Cambodia, EAAFP Chair, with opening remarks given by Yeon-chul Yoo of South Korea, Chairman of the Standing Committee of Ramsar. Following introductions, Spike Millington, Chief Executive of EAAFP, provided an introduction to EAAFP and links to Ramsar process. Lew Young, Ramsar Regional Representative for Asia-Oceania further identified linkages between Ramsar and EAAFP. There were presentations highlighting national partnerships and country-led activities by Lei Guangchun of China, Agus Sutito of Indonesia and Nobuhoko Kishimoto of Japan. In the following days, several side events were held to introduce the Global Interflyway Network report – outcomes of the 2011 Global Waterbird Flyways Workshop held in Seosan City – and to highlight the importance of East Asian tidal flats in the context of EAAFP, the latter co-hosted by EAAFP, Wetlands International and BirdLife International. 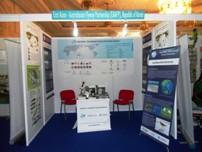 EAAFP had fruitful discussions with potential partners, notably Malaysia, Viet Nam, Myanmar and North Korea with regard to joining the EAAFP. Especially, an international workshop to raise awareness of EAAFP among North Korea government decision-makers is proposed in Pyeongyang in spring 2013. The co-funding (50%) for this workshop has been committed by the Swiss Government and additional sources of funding were discussed with Ramsar, BirdLife International, Wetlands International and Ramsar RRC-EA. The EAAFP will continue to follow up on these meetings with corresponding countries.