Convention on the Conservation of Migratory Species of Wild Animals (CMS) is one of EAAFP’s intergovernmental organization Partners and has been collaborating with EAAFP closely since the early stage when EAAFP was established. EAAFP has worked with CMS on promoting World Migratory Bird Day and developing the Species Action Plans for Black-faced Spoonbill, Spoon-billed Sandpiper, Chinese Crested Tern, Baer’s Pochard and Dalmatian Pelican.

Between 15 and 22 February 2020, the Thirteenth Meeting of Conference of the Parties to the Convention on the Conservation of Migratory Species of Wild Animals (CMS COP 13) was held in Gandhinagar, India. CMS COP13 was the most-attended COP for the Convention in history, with over 2,500 participants from Parties, non-Party countries, United Nation agencies, intergovernmental organization, international NGOs, national NGOs and media. The theme of the COP was ‘Migratory species connect the planet and together we welcome them home.’ The CMS COP13 effectively kicked off a series of international meetings related to nature in 2020 in this super year for nature and biodiversity, and several significant resolutions and decisions to conserve migratory species were adopted, contributing to the shaping of the Post-2020 Global Biodiversity Framework.

During the COP, the Gandhinagar Declaration was adopted, which called for a stronger emphasis on migratory species and its integration under the concept of ‘ecological connectivity’ in the Post-2020 Global Biodiversity Framework – a new global biodiversity strategy for the next decade, which is expected to be adopted at the UN Biodiversity Conference in October 2020. The message was sent to the negotiating session of the Open-ended Working Group on the Post-2020 Global Biodiversity Framework held in Italy between 24-29, February. In addition, ten migratory species were added to CMS Appendices, as is a number of cross-cutting policy frameworks to address threats to migratory species including1:

Prior to the official start of CMS COP13, a Stake-holder Dialogue was held on 15th Feb, in which Member states, non-governmental organizations and intergovernmental organizations were convened to allow open discussion among stakeholders.  Nicola Crockford from Royal Society for the Protection of Birds (BirdLife International partner), and Ward Hagemeijer from Wetlands International were in the discussion panel.  On 16th Feb, the High-level Segment with Ministers and several intergovernmental organizations and multilateral environmental agreements such as CMS, CBD, Ramsar Convention on Wetlands and ASEAN Centre For Biodiversity (ACB) was organized to discuss priorities for migratory species conservation in the Post-2020 Global Biodiversity Frame.  Dr. Theresa Mundita Lim, Executive Director of ACB emphasized the work in ASEAN countries and Martha Rojas Urrego, Ramsar Convention on Wetlands, emphasized the importance of preserving wetlands to support migratory species.

The Committee of the Whole (Plenary)

The CMS COP13 started off with opening welcoming addresses, including His Excellency Narendra Modi, Prime Minister of India. In his Outgoing COP presidency statement by the Philippines, Ramon Bagatsing Jr., Ambassador of the Philippines to India, highlighted EAAFP’S contribution to promoting the conservation of migratory waterbirds in the EAAF. 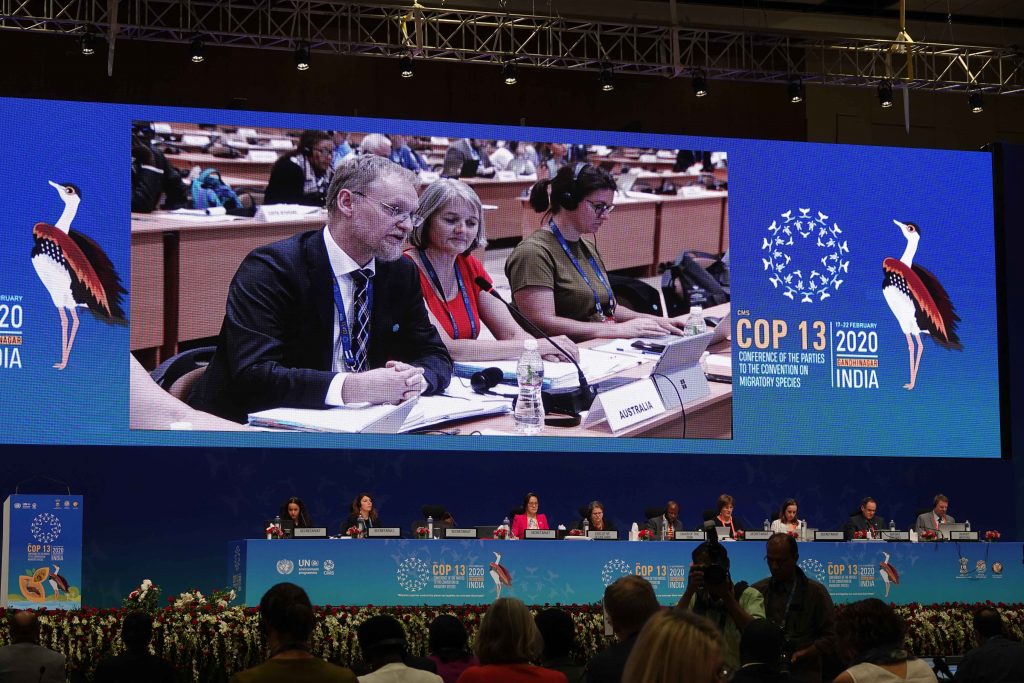 There were a number of agenda items directly relevant to the work of the EAAFP. The most relevant resolutions and documents are as follows:  Progress in the implementation of the Strategic Plan for Migratory Species 2015-2023 (Doc.14.1)

One important result of the COP was that the Indian Government announced the establishment of a new institutional framework focused on the conservation and research of migratory birds and associated issues, as well as a National Action Plan for the Central Asian Flyway (CAF). India also expressed its readiness to facilitate the engagement of other countries along this critical Flyway, which shares a number of species with the East Asian-Australasian Flyway.

Various side events filled the time between and after the plenary session. This was the time when Party states, non-governmental organizations and intergovernmental organizations engaged in discussions on broad issues of importance to migratory species such as Ecological Connectivity, Climate Change, Illegal Hunting, Renewable Energy, with the different stakeholders. EAAFP Partners engaged in approximately 16 events (link), and the Secretariat was invited to present at the side event ”Beyond Ecologically Connectivity: Building a Network of Sites,  People and Institutions”, organized by International Crane Foundation (ICF) and IUCN. Additionally, the EAAFP Task Force on Illegal Hunting, Taking and Trade of Migratory Waterbirds was officially introduced by Dr. Mark Carey, representing the Government of Australia as the Vice-chair of the task force during the side event “Towards eradication of illegal killing, taking and trade of wild birds” convened by BirdLife International, CMS and CAFF/AMBI. Other side events organized by or involved EAAFP Partners are as follows:

Exhibitions and special side events

In addition to the busy schedule of CMS COP13, there were exhibitions and special side events, where COP participants could display and promote their conservation work. Our Partners from BirdLife International and the ASEAN Centre for Biodiversity organized exhibition booths and interacted with COP participants. Presentations, film screenings and even puppet show were enjoyed by local and international audience during the conference.

Booths by BirdLife International and ASEAN Centre For Biodiversity © EAAFP

Excursion to the Thol Lake Bird Sanctuary in Ahmedabad © EAAFP

On 22nd Feb 2020, the CMS COP concluded with 10 new migratory species included in the CMS Appendices, adopted Concerted Actions for 14 species, convened the first ever report on the Status of Migratory Species,  seven resolutions of cross-cutting policy measures to address threats to migratory species, three CMS Ambassadors for terrestrial, avian and aquatic species, seven Migratory Species Champions, as well as new Agreements and MoUs benefiting and fostering conservation  of migratory species. The Gandhinagar Declaration adopted during the COP agreed on important steps moving forward to conserve migratory species to be delivered for developing the Post-2020 Global Biodiversity Framework. The EAAFP will continue to work with partners to implement actions to conserve migratory waterbirds in East Asian-Australasian Flyway and continue to contribute in the coming important international events to develop the Post-2020 Global Biodiversity Framework.

“As one of the Youth who is dreaming to be a conservationist, thankfully, it was a huge opportunity to see the discussion and catch up a process of the Post-2020 global biodiversity framework agenda. Meanwhile, it also felt sorry that there was no apparent youth engagement during the session or any side event, even though they need to take the leading role on this conversation in upcoming years. With many prioritizing agendas, I hope this issue can be raised in the next CMS COP or at the other global conservation events and I wish to be there either!“

Photos: Click [here] for photos of EAAFP at CMS COP13.

Official press releases and news from CMS and IISD: 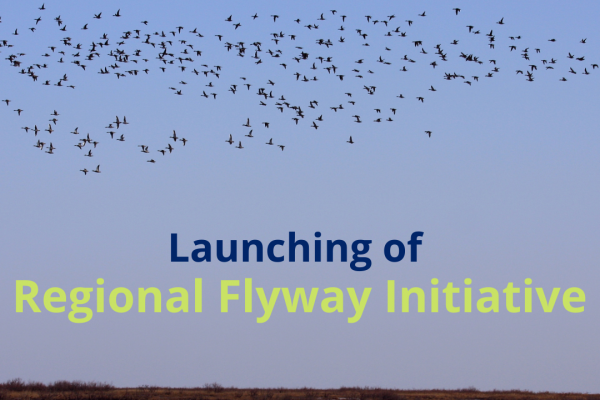 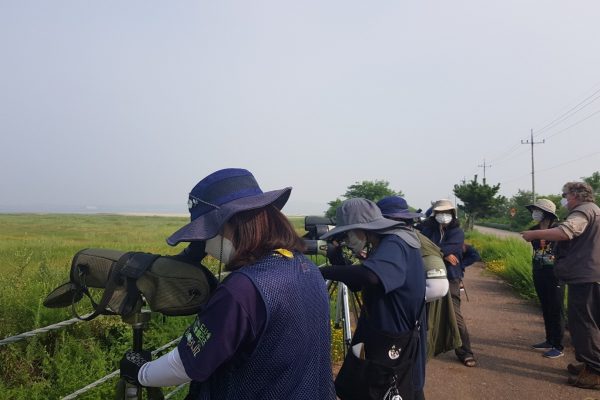