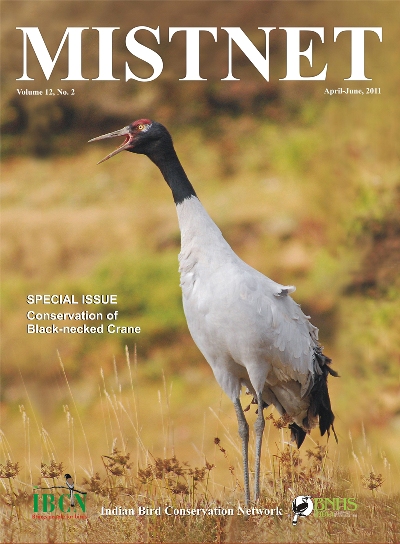 Cranes Calling, a regional cooperation workshop for conservation of the Black-necked Crane (BNC), was held on April 2011 in New Delhi, India. The workshop was attended by 81 participants from India and Bhutan including representatives of BirdLife International, Wetlands International and UNESCO, and was organized by WWF-India, Ministry of Environment and Forest of India, Bombay Natural History Society (BNHS) and Indian Bird Conservation Network (IBCN).
The key objectives of the workshop were to facilitate knowledge-sharing and information exchange among conservation experts on the Black-necked Crane Grus nigricollis, to use the species as a vehicle for international cooperation between India, China and Bhutan and to explore the opportunities of community exchange programmes among these countries.
The Black-necked Crane breeds in the high altitude wetlands of the Tibetan Plateau (China) Eastern Ladakh in Jammu and Kashmir and Gurudongmar Lake in Sikkim (India). The species winters in lower altitudes in Tibetan Plateau, Yunan and Guizhou (China), Phobjika and Bumdeling (Bhutan) and Sangti, Zimithang valleys in Arunachal Pradesh (India). The species has strong cultural, spiritual and religious links to the local people in the region. The total global population of the species is estimated to be about 11,000 individuals and it is listed as a globally ‘Vulnerable’ species by International Union for Conservation of Nature (IUCN).