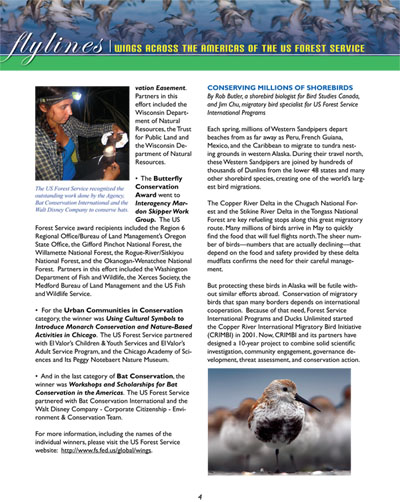 © Wings Across the Americas

Each spring, millions of Western Sandpipers depart beaches from as far away as Peru, French Guiana, Mexico, and the Caribbean to migrate to tundra nesting grounds in western Alaska.The Copper River Delta in the Chugach National Forest and the Stikine River Delta in the Tongass National Forest are key refueling stops along this great migratory route. Many millions of birds arrive in May to quickly find the food that will fuel flights north.The sheer number of birds—numbers that are actually declining—that depend on the food and safety provided by these delta mudflats confirms the need for their careful management.
But protecting these birds in Alaska will be futile without similar efforts abroad. Conservation of migratory birds that span many borders depends on international cooperation. Because of that need, Forest Service International Programs and Ducks Unlimited started the Copper River International Migratory Bird Initiative (CRIMBI) in 2001. Now, CRIMBI and its partners have designed a 10-year project to combine solid scientific investigation, community engagement, governance development, threat assessment, and conservation action.
The Pacific Flyway countries of Canada, USA, Mexico, Panama, Colombia, Ecuador, and Peru are already implementing the project. The project—one of the leading efforts of Wings Across the Americas—will catalyze a survey of the numbers of Western Sandpipers to track range-wide trends and pinpoint causes of change in North, Central, and South America. The project will also engage organizations and individuals to participate following a standard online data protocol and will build a strong voice for international conservation. The results of the project will help to protect and restore important habitat throughout the range of Western Sandpipers to benefit that species and many other shorebirds. Initial activities of the project are to train observers to census Western Sandpipers and other shorebirds to help determine causes of population declines locally, regionally, and globally and to design interventions to reverse declines and secure stable or increasing populations.
A workshop to promote this initiative was recently held in Mazatlán, Sinaloa, Mexico. Participation in this workshop included 41 individuals from 29 institutions. The result of this workshop was the completion of a monitoring protocol that will be used at 11 important shorebird sites in Northwest Mexico. The protocol was developed by the Grupo de Aves delNoroeste (“GANO”), a collective working group of shorebird biologists in Northwest Mexico.
The range-wide project is led by PRBO Conservation Sciences in California, Bird Studies Canada, Terra Pen¬insular Mexico, Panama Audubon Society, AsociacionCalidris in Colombia, Aves y Conservacion in Ecuador, and Neotropical Center for Wetlands Training (CNEH in Spanish) in Peru. Funding has been provided by U.S. Forest Service International Programs, U.S. Fish and Wildlife Service, Mexican National Commission for Natural Protected Areas (CONANP in Spanish), the Packard Foundation, and Nisqually National Wildlife Refuge.