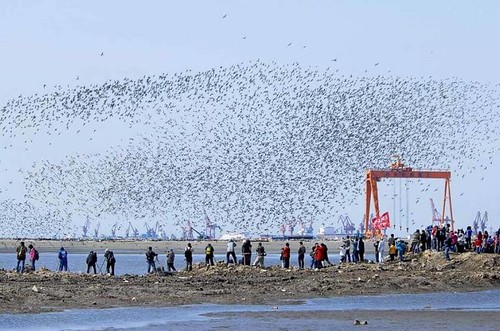 In late April, the Bar-tailed Godwits, medium-sized wading birds that have spent the northern winter along the coasts of Australia and New Zealand, start to get restless. In the evenings, flocks spiral up into the gathering dusk, testing the winds, and if these are favourable they take off on their annual northward migration.

Six days later, after a non-stop flight, they arrive on the Yellow Sea coast of China, their accumulated fat supplies depleted after the long journey. What awaits them upon arrival along the eastern coast of China is a very different, and much less hospitable, environment than previous generations of Bar-tailed Godwits experienced in decades past.

Gone are many of the mudflats with their rich resources of marine invertebrates, food for these birds. Gone, too, are the coastal marshes and wetlands where the birds used to seek refuge from the high tides that inundated the mudflats. In their place are industrial developments, chemical factories and port infrastructure. Concrete sea walls sharply separate these reclaimed areas from the sea, leaving no space for the birds to rest or feed.

Exhausted, the flocks seek other mudflats, but these are increasingly hard to find, left behind by the frenetic pace of China’s rush to convert its natural coastal wetland heritage to a gleaming new world of industrial and residential development. Under current coastal reclamation plans, only a handful of sites will remain after 2020, precariously protected by the diminishing number and extent of a small number of isolated nature reserves.

Wade Shepard’s recent article on China’s land reclamation programme (“The gift from the sea”) documents the extent of the “all out development free-for-all” that land reclamation has become in the coastal provinces of China (a similar situation also pertains in South Korea), and the short-term economic and policy incentives driving the process.

But what of the long-term costs? At a time when western countries are beginning to realise the benefits of natural coastal ecosystems in buffering the impacts of climate-changed induced sea-level rise and storm surges and attempting to restore these areas, China is galloping headlong in the opposite direction.

One of the sites mentioned in Shepard’s article is the Caofeidian new economic zone in Tangshan, built on the formerly extensive mudflats of north Bohai Bay. Only a small stretch of mudflats remains in this area, at Nanpu.

Yet, this single site supports over 65,000 Red Knots, 60 per cent of the entire Flyway population and 80,000 Curlew Sandpipers (45 per cent of the population) on their northward migration. The reason for such spectacular concentrations of shorebirds at Nanpu is because there is simply nowhere else for them to go – yet the whole area is currently being reclaimed for construction, and all mudflats are scheduled to be reclaimed by 2020.

Shepard also notes that Jiangsu province “is currently reclaiming 21 parcels of land from the Yellow Sea, totalling 1,817 km2”. These include the mudflats at Dongtai and Tiaozini, a vital staging area for the critically endangered Spoon-billed Sandpiper, a species that has been declining at an annual rate of over 25 per cent in recent years and is thought to number only 400 individuals remaining in the wild. 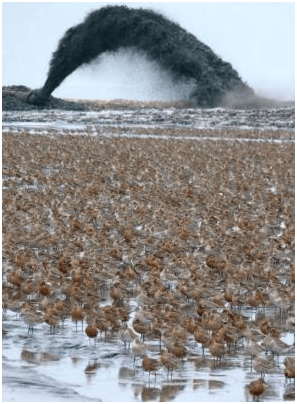 Bar-tailed godwits roosting on the mudflats at Yalu River in northern China, as mud is pumped out from neighbouring mudflats as part of the reclamation process. © David Melville

Another endangered species, Nordmann’s Greenshank is also dependent on these mudflats. Indeed it is thought that the entire adult world populations of these two species rely on the rich mudflats of Dongtai and Tiaozini for refueling and moulting during the southward migration. The disappearance of the mudflats is likely to hasten their tilt towards extinction.

Yet the issue is not simply one for China alone. China sits at the center of the East Asian-Australasian Flyway, connecting the breeding grounds of migratory waterbirds in Alaska and Arctic Russia with their wintering grounds in South-east Asia, Australia and New Zealand. Over 50 million migratory waterbirds use this flyway annually, but populations are declining precipitously, some species at 5-9 per cent per year. For many the mudflats of Yellow Sea constitute a migratory bottleneck.

How much longer birdwatchers will be able to witness the restless departure of Bar-tailed Godwits from the shores of Australia and New Zealand – as well as other waterbirds making their annual journey along the flyway – will probably be determined by pace of coastal reclamation in China.

Spike Millington is chief executive of the Partnership for the East Asian-Australasian Flyway. He is based in Incheon, Republic of Korea.