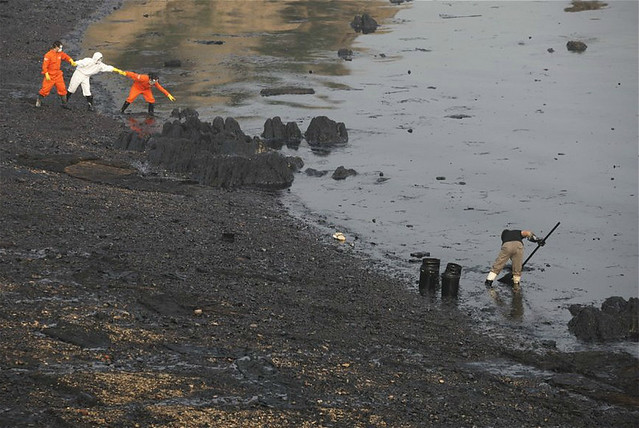 © Image: Greenpeace/Jiang He, through Chinadialogue

In May, China’s central government published its marine strategy for the 13th Five-Year Plan period (2016-2020), setting out broad aims and, for the first time, some binding targets.

The Five-Year Plan’s (FYP) marine economic development plan is a clear signal that the government is giving greater strategic significance to the oceans. It is only the second time the country’s national development blueprint has included a section on the seas, starting with the 12th FYP in 2012.

The plan covers water pollution, land development and coastal conservation targets, and provides a framework for managing regions under pressure.

China’s breakneck economic development took off largely along the eastern seaboard in the 1980s, creating a legacy of serious water pollution and land management problems. Today, China’s economic powerhouses are still almost all in coastal provinces.

The first marine economic development plan, issued in 2012, drew upon locally relevant marine economic strategies that coastal cities and provinces were already producing. Official figures show that between 2006 and 2010 the marine economy, including fishing and shipping, accounted for 10% of China’s economy as a whole – but closer to 18% of the economy in the eleven coastal provinces.

Coastal waters have been heavily polluted by industrial pollutants from rivers, and many wetlands drained for development.

According to the annual Report on China’s Marine Environmental Quality, issued by the State Oceanic Administration, the percentage of coastal waters classed as severely polluted (Class IV or worse) fluctuated between 12% and 17% in the period to the end of the last plan in 2016. Seawater is classified as Class I to Class IV. Only Classes I and II are safe for human contact. Water of worse quality than Class IV is effectively useless.

Nor is pollution the only problem. Overfishing has depleted coastal fishery stocks, and wiped out many traditional fishing grounds.

It contains a coastline conservation goal, that coast not damaged by land reclamation or construction should account for at least 35% of the total coastline.

These are quantified binding targets that will be used to evaluate the performance of officials. Although there are only two binding targets on marine policy, they are a new addition for the 13th FYP period, and significant because local officials’ careers depend upon meeting them.

A series of management systems will be put in place, laying the foundations for a coherent approach to cleaning up coastal water pollution.

They include caps on pollution in key areas; assessments of coastal water quality; and licenses to permit and control releases of pollutants into coastal waters.

Ecological red lines are among China’s most important environmental management systems, and are now these are now being applied to coastal waters.

The Marine 13th FYP proposes several redlined zones, including the Liaodong peninsula, home to the key oil terminal port of Dalian, the Bohai Gulf which receives river water run off from much of the north east China plain and is a crowded shipping way with several major ports, and the sub-tropical island province of Hainan.

The redline zone off Shandong province in the Bohai Gulf covers both current and planned nature reserves. It bans removal of sand from key estuaries, land reclamation and new waste outlets within the zone, and sets a minimum volume for fresh water flowing from rivers into the sea.

The system builds on trials of marine redlines that started as early as 2012 in some areas.

In July 2016, national standards for setting marine redlines were released. However, there is still no legislative basis for marine redlines, so the requirements are not binding.

Wang Yamin, associate professor at the Marine College of Shandong University, told chinadialogue, that any future legislation would need to take account of regional differences, and allow for regional environmental characteristics and development needs.

Gao Ying, senior policy officer with World Wildlife Federation China, said China’s desire to deal with marine pollution stems partly from its need to improve the overall economy by tackling environmental constraints on growth. Wang too sees the process as a consistent development from wider concerns.

Statistics suggest there may be more scope for economic growth in marine economy than on land: China’s marine economy grew by 8.1% during the 12th FYP period (2011-2015), beating 7.8% growth for the economy as a whole.

Furthermore, there may be more value in developing farther off waters, rather than coastal waters already damaged by pollution and over-fishing.

However, China’s increasing activity in Antarctica, and illegal fishing by some of China’s deep-sea fishing vessels, has raised international concern.

China’s 13th FYP lays out its desire to become more involved in international governance of Antarctica. Liu Nengye, a law lecturer at the University of Adelaide in Australia, has pointed out that, as Chinese fishing and tourism in the Antarctic is growing rapidly, China’s effective regulation of these industries is needed for sustainable development.

China’s fishing fleet first ventured into polar waters in the 1980s. More recently, the rapid expansion of its deep-sea fishing fleet in other oceans too has caused international concern and criticism. Subsidies for deep-sea fishing initiated in 2006 led to a rise of 45% in the number of vessels from 2007 and 2014, during a time of unprecedented pressure on global fisheries after years of over-fishing.

China is gradually increasing regulation of its fishing industry. Reforms to subsidies started in 2015, with phased cuts to fuel subsidies – by 2019 the subsidy is set to return to its 2014 level of 40%. China is also bringing its distant water fishing fleet into line with international norms, with standardised logs, monitoring of vessel locations, and catch certification.

In May, China hosted an annual meeting of signatories to the Antarctic Treaty, the first time it has hosted the meeting since 1983, when it signed up to the 1959 treaty.

As China becomes more aware of its “marine rights”, it will also take on more responsibility for global marine governance, says Gao. She pointed out that Xi Jinping stressed at the UN Sustainable Development Summit in 2015 that China would promote global sustainable development, so China cannot avoid the issue of sustainable marine development.