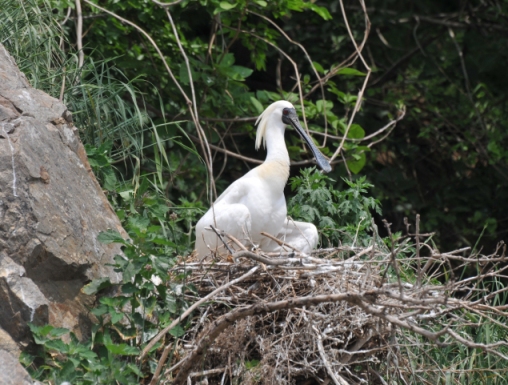 The 2011 International Black-faced Spoonbill Census has found a large decrease in the known wintering populations since last year’s census. Overall numbers fell from 2,347 birds in January 2010 to 1,848 in January 2011, a decline of 21%. Black-faced Spoonbill is currently considered as Endangered on the IUCN Red List. It was downlisted from Critically Endangered in 2000.As in previous years, the biggest wintering population was recorded in Taiwan, but it was here too that the largest drop in numbers was seen, from 1280 in 2010 to 843 (34%).The second most important wintering area, China’s Deep Bay (including both Hong Kong and Shenzhen) saw numbers fall from 462 to 411. Although numbers have improved dramatically from the known global population of 300 in 1993, the abrupt fall in this winter’s counts emphasizes that this species is still at risk of extinction. Habitat destruction and degradation are still the main threats to the Black-faced Spoonbill. Many coastal wetland areas in this region are being destroyed for development (for example, in Hainan, Macao and Korea).

The original article can be found here.