Posted on November 2, 2020 Categories: All News 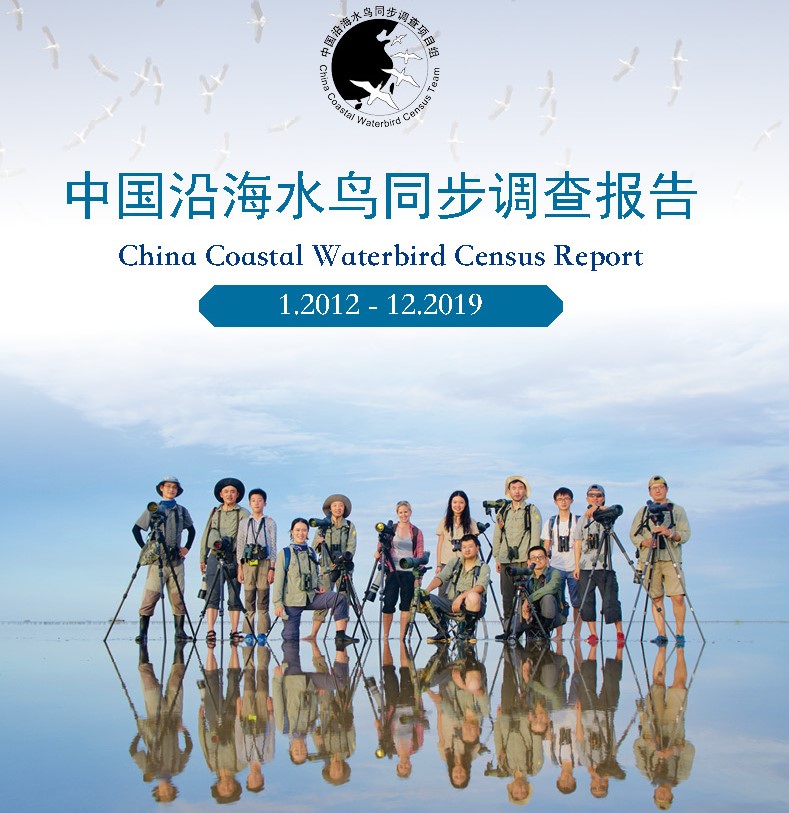 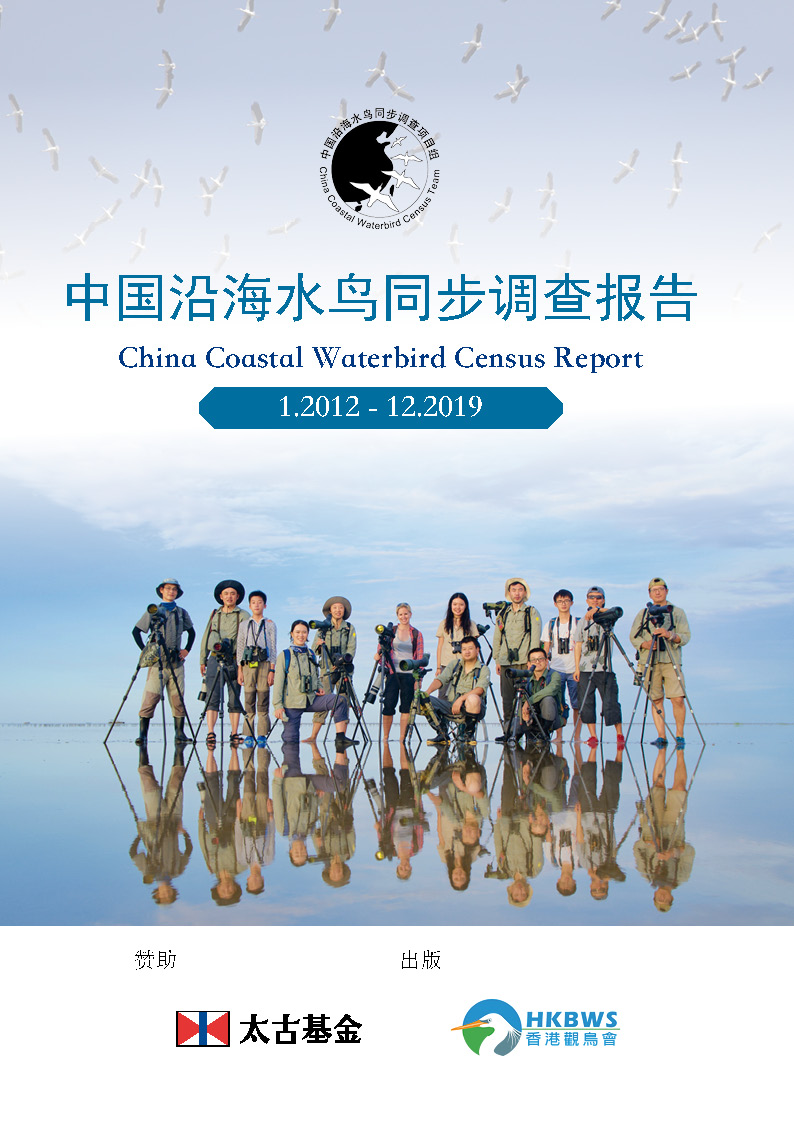 Sponsored by the Swire Charitable Trust, the latest China Coastal Waterbird Census Report had been published in September 2020 by the Hong Kong Bird Watching Society (HKBWS)! The report was written by Dr. Chi-yeung Choi, Research Assistant Professor at Southern University of Science and Technology, Ms Jing Li, director of “SBS in China” and Mr Wen-jie Xue, a bird researcher. It is the result analyzed and summarized from 8-year-long data. The data was collected from monthly surveys conducted by bird watching societies, institutes and individual bird watchers along the coast of China mainland and Hong Kong from 2012 to 2019.

China Coastal Waterbird Census (CCWC), which was initiated in September 2005, has a 15-year-long history. Apart from being one of the organizations initiating this census, HKBWS has been responsible for publishing the CCWC Reports. Including the one published this time, there are 4 reports in total, covering the survey from 2005 to 2019.

Overview of the number of waterbird species, population and the protection levels 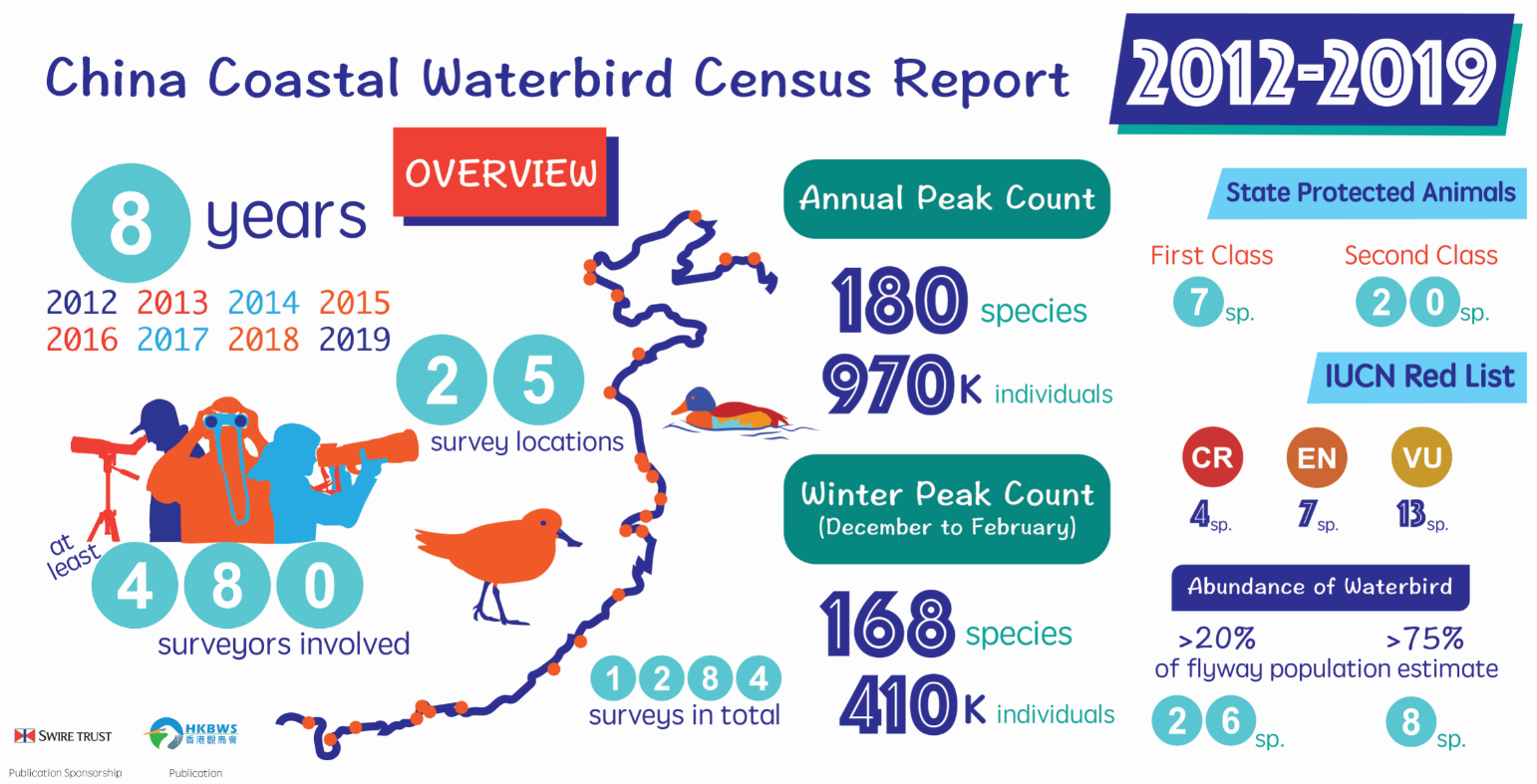 During the 8-year period from 2012 to 2019, about 480 surveyors joined CCWC and conducted a total of 1,284 surveys at 25 survey sites along the coast. The results showed that China’s coastal wetlands provided habitats for 180 species with approximately 970,000 waterbirds. The most abundant waterbird groups are the shorebirds and Anatids, accounting for 51% and 24% of the waterbirds respectively, while the most abundant species is Great Knot.

For the survey of migratory waterbirds, data collected in the cold days can reflect more accurately the wintering situation of the birds. According to the peak count in winter (from December to February of the following year), 168 waterbird species with about 410,000 individuals chose China’s coastal wetlands as their wintering sites. Same as the annual count, the most abundant groups are the shorebirds and Anatids, accounting for 30% and 39% of the waterbirds respectively, while the most abundant wintering species is Dunlin.

Other than a summary on species number and abundance, the report also mentioned that there are many species need to be protected among all 180 species recorded in CCWC. Seven species are regarded as Class I state protected bird according to the national government of China, including Black Stork and Red-crowned Crane, while 20 of them are classified as Class II, such as Black-faced Spoonbill, Nordmann’s Greenshank, Chinese Crested Tern etc. In terms of IUCN Red List, there are 4 waterbird species listed as Critically Endangered (CR), 7 as Endangered (EN) and 13 as Vulnerable (VU). The 4 Critically Endangered species recorded are Baer’s Pochard, Chinese Crested Tern, Siberian Crane and Spoon-billed Sandpiper.

Analysis on the waterbird population trend

In terms of the annual count, there were no significant changes on the population trend of all waterbird groups in these 8 years. However, at the species level, the number of Bar-tailed Godwit and Common Black-headed Gull showed a significant decreasing trend. If only counting the wintering population (from December to February of the next year), the overall population of Mallard and Common Moorhen had decreased significantly.

On the other hand, the report also pointed out that some waterbirds had a significant increase during the survey period. For the annual count, there was 1 species (Asia Dowitcher), while there were 12 species for the wintering count (Bean Goose, Common Shelduck, Falcated Duck, Eurasian Wigeon, Eurasian Teal, Tufted Duck, Common Redshank, Grey Plover, Little Grebe, Chinese Pond Heron and Eurasian Spoonbill).

Wetlands along the coast of China are of importance to the East Asian-Australasian Flyway!

Scientists usually estimate a total population of each bird species in a flyway region, then compare the actual data and estimated value to assess the importance of each habitat. In the entire East Asian-Australasian Flyway (EAAF), more than half of the waterbird species have been estimated. When the population of a certain waterbird species in a location accounts for a higher percentage of the estimated value in the flyway region, that means this particular location is particularly important to the species. For example, 5% of the Black-faced Spoonbill population is recorded in site A, while only 0.05% is recorded in site B, this means site A is relatively more important to Black-faced Spoonbill than site B. The CCWC recorded that there were 26 waterbird species having a population more than 20% of the estimated value in EAAF at the project survey sites (all-sites-combined). Eight out of these 26 species even exceeded 75% of the flyway estimated value, showing that the wetlands along the coast of China, especially the survey sites, are extremely important to these species, including Spoon-billed Sandpiper (CR) and Nordmann’s Greenshank (EN).

Let’s meet up at the same time, but in different places, to safeguard the waterbirds together!

The coastline of China is over 24,000 kilometers long and many intertidal wetlands along this coast are important habitats for waterbirds. Nevertheless, potential threats were observed during the survey period, like human disturbance, habitat loss etc. The CCWC team consists of over 20 groups of surveyors along the coast. Up to now, nearly 500 surveyors have been involved and most of them worked on a voluntary basis. They have never stopped conducting the monthly survey for the past 15 years, with an aim to gain a better understanding on the distribution of waterbirds, their annual and seasonal changes, hoping to provide accurate and powerful scientific basis for making right decisions in waterbird and wetland conservation in the future.