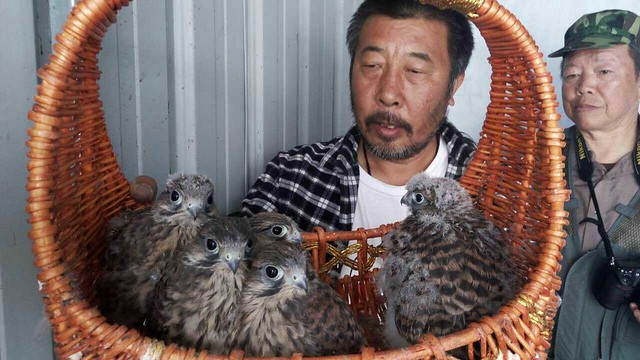 Falling down by hurricane from the treetop, six baby Common Kestrels were sent to the director of CCAfa for Waterfowls at Tangshan in May 2017. Photo by © CBCGDF staff.

Zhiwei Tian’s path to becoming a legendary saviour of wild bird began with an accidental encounter 13 years ago. In October of 2004, Zhiwei heard that a big white bird was poisoned by toxic bait during its migration. As a sympathetic veteran and an amateur in birds, Zhiwei left his business and took the bird to his home. The bird recovered under Zhiwei’s care, and he found out that this white bird is actually an oriental white stork, a nationally protected species. The experience of saving an endangered animal and the relationship that Zhiwei developed with the Oriental White Stork stimulated Zhiwei’s passion in protecting birds. 12 years later, Zhiwei was acknowledged by the Executive Secretary-General of the Convention on Migratory Species (CMS) and became a globally renowned bird protector. This is the story of an ordinary individual who devoted his energy to fight for biodiversity and the lives of others. 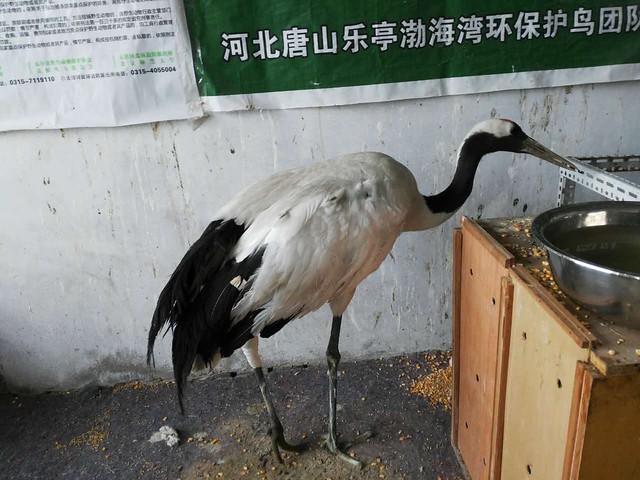 With a broken wing and fractured left-leg, a Red-crowned Crane was sent to the Community Conservation Area and was under intensive care by Tian Zhiwei on May 7th 2017.

Among the 9 global flyways that migratory birds take, China is included in of three of them, which means China has a very rich and diverse fauna that includes 384species of migratory birds. However, due to factors such as habitat loss, hunting, habitat destruction, and scarcity of resources, an increasing number of birds die on their migratory routes. After saving the Oriental White Stork, Zhiwei feels a sense of responsibility to protect other endangered species from suffering the same fate. Living in the middle of the East Asian-Australasian Flyway migratory path, Zhiwei decided to open the DaQingHe Rescue Station, which is personally designed and later recognised by the renowned China Biodiversity Conservation and Green Development Foundation (CBCGDF) as a Community Conservation Area – dubbed as the CCAfa for Waterfowls at Tangshan. 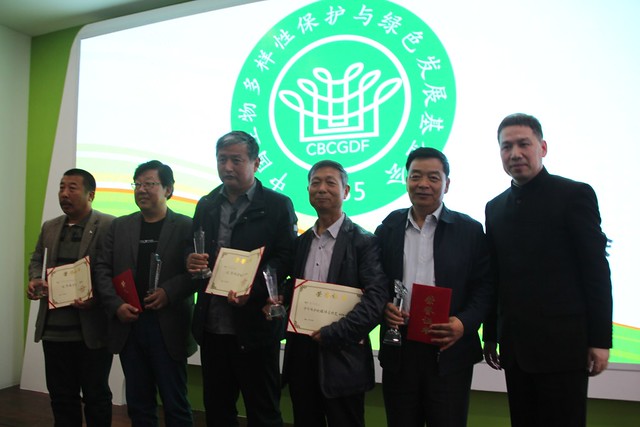 Tian was recognized as a Folk Conservation Star and shared his conservation experiences on the 2ndAnnualMeeting of CCAfa Directors, April 16th 2017. Photo by © CBCGDF

The CCAfa contains multiple healing rooms for injured birds and a huge pool that provides drinking water for all migrants. In order to find and help wounded birds, Zhiwei resigned from his job and voluntarily patrolled along the birds’ route every day during the migratory seasons. In return, more than 300 birds were saved within the first few years, and many of those were endangered species. For this cause, Zhiwei spent more than 30,-000 dollars, and he realized that the protection of birds cannot be achieved on his own.

Zhiwei’s effort to change peoples’ mindset started locally, as he toured around neighbours and schools to advocate for birds’ protection. As a result of his relentless work, locals stopped eating birds’ eggs, actively sent injured birds to CCAfa, and helped with Zhiwei’s patrol when they had time. Gradually, the Community Conservation Area became well-known in the area, and scientific organizations collaborated with Zhiweito track endangered species, provide funding, and develop new ways to help migratory birds. With others’ help, Zhiwei was able to rescue the most precious birds in the world, including a Red-crowned Crane that fractured its leg, a Sparrowhawk that was poisoned, and a Bar-headed Goose that could not keep up with its team. 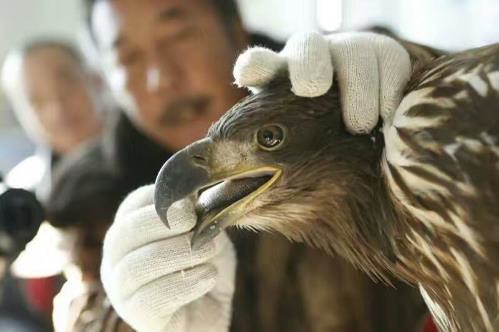 Feeding an eagle with fish. Photo by © TianZhiwei.

Zhiwei’s education of other people paid off tremendously over the years. On the migratory path where Zhiwei works, people no longer hunt or persecute birds after 2014, which hugely improved the survival rate of migratory species. As Zhiwei’s route becomes the safest migratory path in China, it is clear that the protection of species requires the collaborative efforts of every local person. 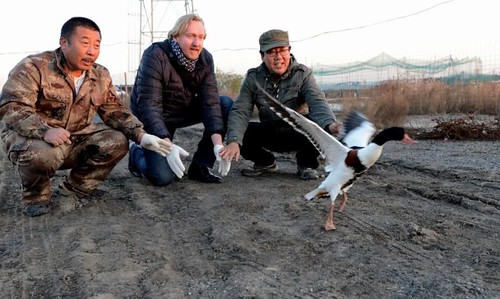 Dr. Bradnee Chambers, the Executive Secretary-General of CMS, at the CCAfafor Waterfowls at Tangshan. Nov. 1st, 2016.Photo by © CBCGDF

In 2016, Zhiwei Tian attended the 10th International Conference on Wetland as the director of CCAfa for waterfowls at Tangshan. His experience in volunteering work and wetland biodiversity conservation fascinated experts and amateurs around the world. Zhiwei’s transformation from an ordinary individual to a heroic bird saviour demonstrates that the conservation of biodiversity can, and has to, start from common people. In his speech at a local school, Zhiwei claimed that “the protection of birds cannot be achieved without the understanding and support of everyday people. Every person is a significant help just by boycotting bird selling and favouring the development of protected wetlands.” 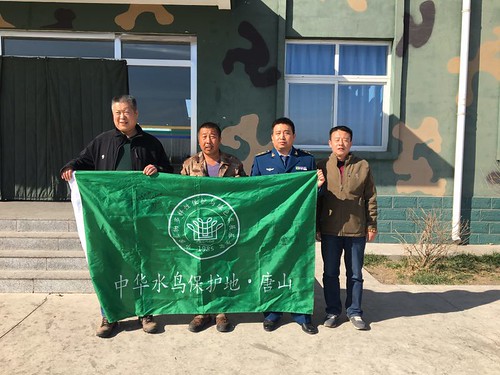 Tian and his peers hold a banner of CCAfa for Waterfowls at Tangshan, 2016. Photo by © Tian.